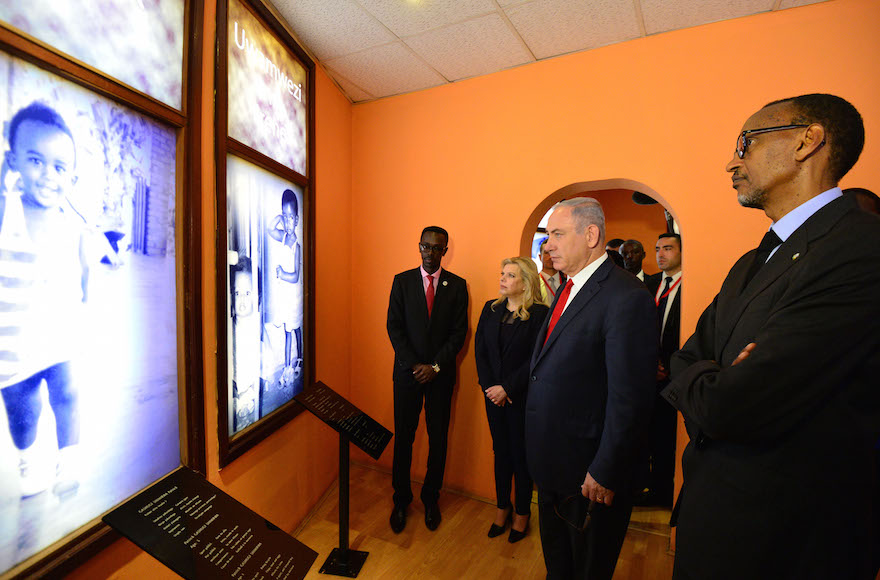 Israeli Prime Minister Benjamin Netanyahu and his wife Sara visiting the remembrance site for the victims of the Rwanda Genocide in 1994, at Kigali, Rwanda, on July 6, 2016. (Kobi Gideon/GPO/Flash90)
Advertisement

(JTA) — Israeli Prime Minister Benjamin Netanyahu visited a memorial for victims of the 1994 genocide in Rwanda upon his arrival in the African nation.

“We are deeply moved by this memorial to the victims of one of history’s greatest crimes and reminded of the haunting similarities to the genocide of our own people. Never Again,” Netanyahu and his wife, Sara, wrote in the visitors’ book on Wednesday.

Netanyahu laid a wreath at the mass graves of some of the more than 800,000 ethnic Tutsis who were killed by ethnic Hutu extremists.

He arrived in Rwanda after visiting Uganda and Kenya this week as part of a five-day, four-nation visit to Africa. Netanyahu was greeted at the Kigali Airport by an honor guard of more than 100 soldiers and was scheduled to meet with President Paul Kagame.

The Israeli leader is scheduled to visit Ethiopia on Thursday.