Donald Trump can lay ‘Stargate’ to rest — assuming he wants to

(JTA) — Mitt Romney’s 2012 presidential campaign never recovered after he was caught on video telling a group of millionaires that 47 percent of Americans will always vote for Democrats because they don’t take “personal responsibility” for their lives and are “dependent upon government.”

The incident has become a case study not only in watching one’s words (and being nice to your waiters), but in spin control. Hammered by the media and the Democrats for sounding elitist and insulting half the country, Romney first blamed the listeners, saying they had misheard what he intended as innocuous demographic analysis. Later, as the transcripts of the video made clear that he said what everyone thought he said, Romney fell back on the classic dodge that his remarks had been taken “out of context.”

A lot went wrong for Romney that year, and the remarks weren’t the only reason independent voters felt that Romney cared more about Wall Street than Main Street. But some regard the incident as a classic case study in bungled PR. Lanny Davis, the Clinton White House lawyer and an author of a book on crisis management, has suggested what Romney ought to have said: “You know, that was a stupid mistake and I didn’t mean it – of course those 47 percent are composed of a variety of voters who have many reasons for not being for me not related to government, and I want to apologize to them for my mistake.”

Had Romney admitted his gaffe, wrote Davis, “the 47 percent issue would have gone away almost instantly.” Davis’ rule: “Tell it all, tell it early, tell it yourself.”

It’s probably safe to assume that Donald Trump hasn’t read Davis’ book. If anything, now that Trump is having a bit of a “47 percent issue” of his own, he seems to be following the Romney campaign’s (failed) strategy: “Deny you said it, blame the media, change the subject.”

The current brouhaha started when critics noticed how a tweet from Trump’s campaign lambasting Hillary Clinton as the “most corrupt candidate ever” featured a six-pointed star and a pile of money. Some critics, pundits and pols cried foul, arguing the image was anti-Semitic. Next, the millennial website Mic revealed the Twitter image had first shown up on message boards of the far-right, anti-Semitic alt-right movement — the same people who gave us the charming (((echo))) symbol to identify Jews. 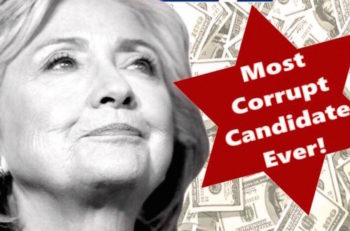 Donald Trump is taking heat for tweeting an image of a six-pointed star next to his rival Hillary Clinton. (Screenshot from Twitter)

Trump denied that the tweeted image was anti-Semitic, saying it was a “Sheriff’s Star.” Nevertheless, Trump’s people quickly removed the tweet and denied that their boss was an anti-Semite. Jared Kushner, Trump’s Jewish son-in-law and increasingly important campaign adviser, put out a statement defending his wife’s father: “My father-in-law is an incredibly loving and tolerant person who has embraced my family and our Judaism since I began dating my wife. I know that Donald does not at all subscribe to any racist or anti-Semitic thinking. I have personally seen him embrace people of all racial and religious backgrounds. The suggestion that he may be intolerant is not reflective of the Donald Trump I know.”

Kushner’s statement seems spot on – at least when it comes to the Jews. For all his vilification of undocumented workers from Mexico and calls for a ban on Muslim immigration, there’s not much evidence that Trump has a problem with Jews.

But Kushner’s statement also seems beside the point. The question isn’t whether Trump is anti-Semitic. Rather, how is it that the Trump campaign ended up tweeting out a meme already making the rounds in anti-Semitic circles? And now that the origin of the image is clear, and the image itself is being hailed by the likes of David Duke, why is Trump doubling down instead of walking it back?

The best-case scenario for the Trump campaign is that, indeed, either Trump or a member of his skeletal staff passed on an internet meme without researching where it came from or how it might be received — and Trump being Trump, he’s not willing to admit a mistake.

Alternately, and ominously, Trump or his staffers knew full well where the meme originated and simply didn’t care.

In either case, for those worried about emboldening white nationalists and other assorted haters, Kushner’s vouching for his father-in-law doesn’t count for much. The fear isn’t about what’s in Donald Trump’s heart but whether he is willing to speak out against the racists and anti-Semites, however marginal, seeking to make common cause with his campaign.

Trump could have put “Stargate” to rest had he made a Davis-like apology: “You know, that was a stupid mistake by my campaign and one that won’t be repeated. In our haste to engage with voters, we didn’t properly vet a tweet that unfortunately originated with some rather nasty people. Rest assured that the Trump campaign does not welcome the support of bigots of any stripe, and that we reject their hateful messages.”

Trump isn’t the first politician — nor the only candidate in this campaign — who has trouble apologizing, or acknowledging a vulnerability. Jeff Greenfield recently wrote about how Hillary Clinton supported “traditional marriage” before eventually getting on board with gay marriage. Asked about her switch, Clinton “grew testy at the very suggestion that her evolution might be explained by political calculation,” Greenfield wrote.

“I think you’re trying to say I used to be opposed and now I’m in favor and I did it for political reasons, and that’s just flat wrong,” Clinton told Fresh Air’s Terry Gross, as if one of the most talented politicians of her generation was above political calculation.

But this controversy is about more than just the idea that being Trump means never having to say your sorry. Whether confronted with questions about support from Duke, a former Ku Klux Klan leader, or about the anti-Semitic internet trolls who torment Jews who write critically about Trump, the candidate demurs, denies or lashes out.

At the same time Trump was digging his heels in over the Star tweet, the Clinton camp was busy extinguishing a fire that most people hadn’t even gotten wind of. Soon after Elie Wiesel died last Saturday, the virulently anti-Israel writer Max Blumenthal put out a series of tweets essentially calling the Holocaust survivor and Nobel laureate a hypocrite and worse. Blumenthal has no connection to the Clinton campaign, although his father, Sidney, happens to be a longtime Clinton adviser. That was enough to prompt Hillary’s people to come out with a strongly worded condemnation of Max Blumenthal, calling his remarks “offensive, hateful, and patently absurd.”

That kind of disavowal plays wells with the Jews, who also responded positively when candidate Barack Obama in 2008 gave a long and impassioned rebuttal of his own pastor’s dubious views on the U.S.-Israel relationship.

Trump could go a long way toward setting aside the anti-Semitism chatter, if he took a cue from his Democratic rivals and gave a similar speech disavowing the haters — or at the very least stopped hanging out with them on Twitter.

Trump says he wouldn’t have removed ‘Star of David’ tweet