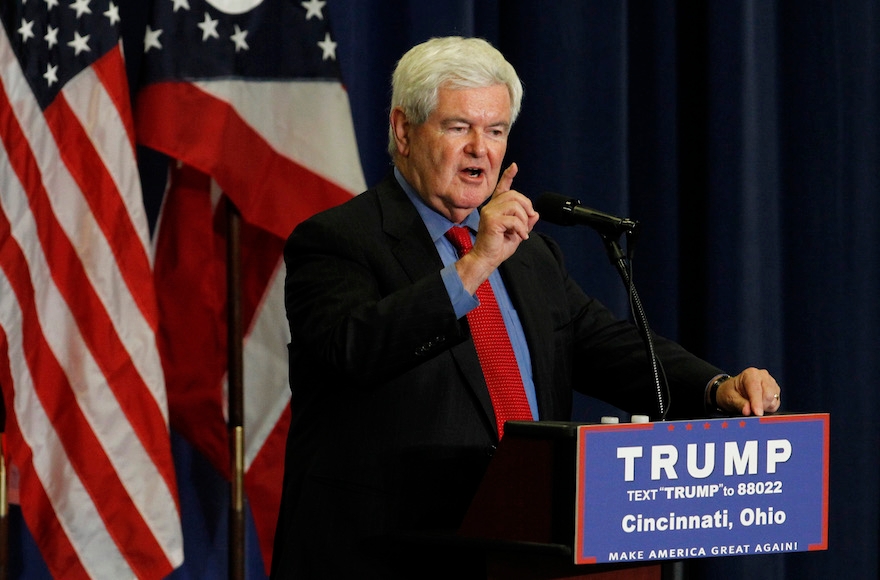 (JTA) — Newt Gingrich defended Donald Trump’s use of an image resembling the Star of David in a tweet criticizing Hillary Clinton as corrupt.

The former House speaker, who is one of the top candidates to be Trump’s vice presidential nominee on the Republican ticket, said in a phone interview with CNN Thursday that he was “very angry” about what he considered to be “the media’s deliberate distortion.”

The controversy over Trumps’s tweet began Saturday when Trump tweeted a graphic that labeled Clinton the “most corrupt candidate ever.” The image featured a six-pointed star and a pile of cash — which many critics said had clear anti-Semitic connotations, and which originally appeared on far-right web sites. The Trump campaign removed the tweet and replaced it with one in the star was swapped out for a circle. Trump denied that the star was in any way a reference to Jews.

“I think it is so profoundly dishonest that it sickens me and makes me very angry,” Gingrich told CNN. “The media’s deliberate distortion. It’s absurdity. He has got a son-in-law who’s an Orthodox Jew, his daughter has converted to Judaism, grandchildren who are Jewish. And he gave a speech at AIPAC that was pretty definitive. And in the middle of this, you get this kind of smear?”

Gingrich, an outspoken supporter of Israel, echoed Trump’s most recent defense of the tweet: that a six-pointed star is featured on a children’s book tied into the popular Disney movie “Frozen.”

“Just think about it for a second — you’re doing a tweet about how somebody who is a crook so you put in cash. That doesn’t imply that she is Jewish. It implies she’s a crook,” he said during the CNN interview. “We found exactly the same star was being used in a book about ‘Frozen’ by Disney. Does anybody want to argue that ‘Frozen’ is anti-Semitic?”

But the current House Speaker, Paul Ryan, who is also Republican, criticized the tweet earlier this week and warned that anti-Semitic images “have no place in a presidential campaign.”

“I really believe he has to clean up the way his (social) media works,” Ryan said on the Charlie Sykes radio program. “They’ve got to clean this thing up.”

Under fire for the tweet, Trump has doubled down. At a rally in Cincinnati, Trump said his campaign “shouldn’t have” removed the original tweet and accused the media of having “racist tendencies.”