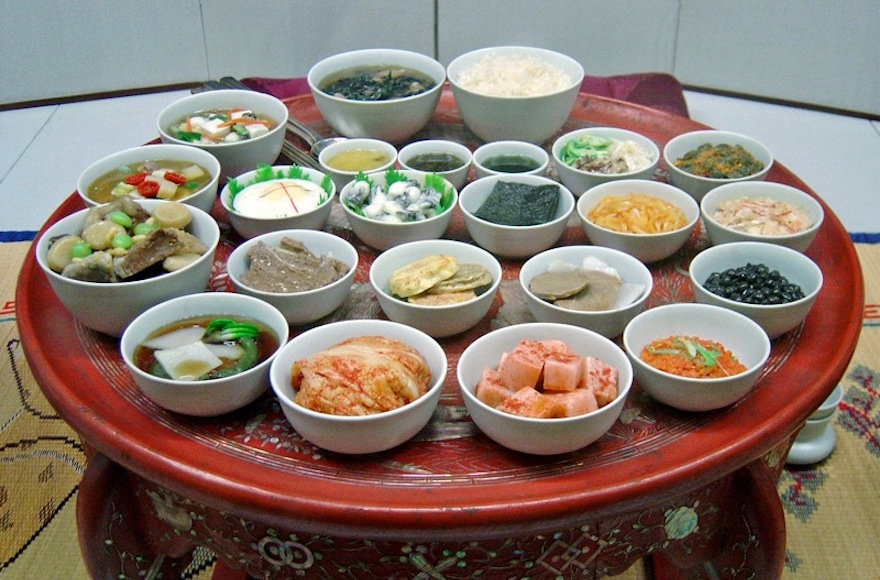 Hanjungsik is a traditional Korean meal with an array of dishes. (Wikimedia Commons)
Advertisement

(JTA) — South Korea has seen the future — and it’s kosher.

Following a meeting with President Park Geun-hye, officials announced plans to provide “administrative and technical support” to help kosher and halal food and cosmetics makers set up shop in Korea and qualify for kosher and halal supervision, the Korea Times reported.

The Korean Ministry of Strategy and Finance said that the global halal market, serving observant Muslims, is growing swiftly and is expected to reach $5.2 trillion globally by 2020, and values the global kosher market at around $250 billion.

The first phase in the plan is to educate companies about the requirements of the Jewish and Muslim markets. Only about 25 companies in South Korea have earned kosher certification on items such as kimchi, rice pasta and salt, according to the Korea Times.

The government plans to provide food makers with kosher glossaries and encourage them to attend Kosherfest, the massive kosher products trade show held each year in New York.

Their halal initiatives seem to be a little further along. According to the ministry, nearly 300 Korean companies have earned halal certification, primarily granted by the Korean Muslim Federation.

Kosher food is hard to come by even in Seoul, the capital city, although the Chabad of Korea says it sells “hundreds of items … from all over the world” for residents and visitors.