Wedding of lesbian firebrands, both 76, is a celebration of Jewish and ‘Aquarian’ traditions 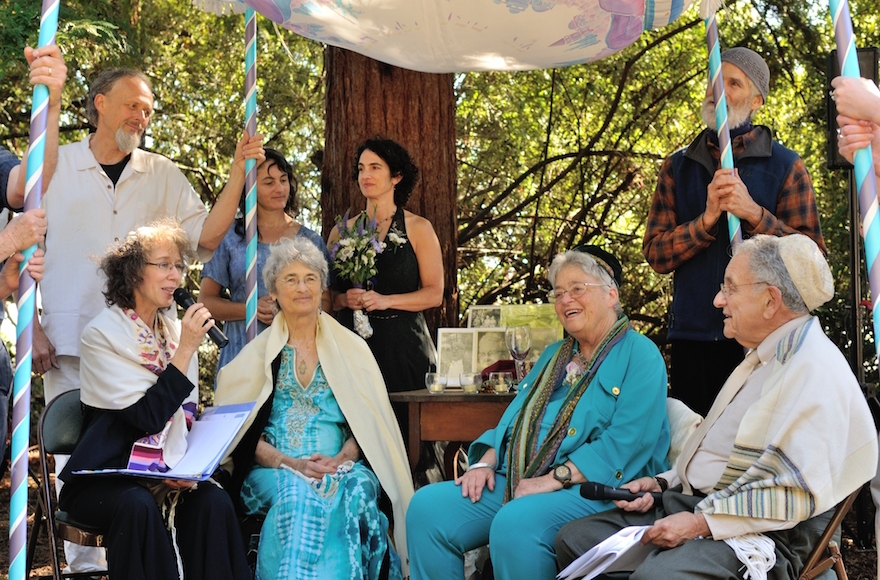 But this wasn’t a love-at-first-sight occurrence. Rather, the two were attending a Shabbat service in which participants were split into pairs to look into each others’ eyes, an exercise to create intimacy within the group, as well as facilitate seeing God within one another.

After services, Dembitz gave Grafton a ride home — and with it, her phone number.

Grafton didn’t call. For the next three years, they’d say hi when they saw each other, but that was the extent of their relationship. However, things changed when they both turned up at the same retreat to celebrate the ordination of the then-leaders of their unique community, the Aquarian Minyan.

As it turned out, Grafton — who had been in short-term relationships with both men and women — needed time to process a lasting attraction to another woman. But once she did, Grafton and Dembitz were rarely apart.

After 18 years together, the Berkeley couple, both 76, married on June 27 under a grove of redwood trees at the Hillside Swedenborgian Church in El Cerrito.

Grafton and Dembitz are very active in their Jewish community. “The Aquarian Minyan is our baby that we have nurtured together,” said Dembitz.

Both serve as “shomrot” (guards) of the minyan, which eschews more traditional language like “trustees” or “president.” Grafton is in charge of long-term planning and budgeting; Dembitz manages and schedules events, along with editing the newsletter. They also lead services, sometimes together.

Founded in 1974, the Aquarian Minyan — which calls itself “a beacon of creative, spiritual and egalitarian Judaism” — grew out of a kabbalistic retreat that Rabbi Zalman Schachter-Shalomi, a founder of the Jewish Renewal movement, led in Berkeley. It was also greatly influenced by Rabbi Shlomo Carlebach, known to many as the singing Chasidic rabbi, who had established his “House of Love and Prayer” in San Francisco.

“The Aquarian Minyan has been a huge influence on me and vice versa,” Grafton said. “Its motto is about finding the rebbe in each of us, and it allows you to find your own creativity and your own spiritual voice and contribute that to the community.”

Not surprisingly, both halves of the couple are no strangers to the concepts of creativity, voice and community.

As a young child, Grafton lived on the Upper West Side of Manhattan. Her father, Samuel Grafton, was a well-known liberal journalist who wrote a syndicated column, “I’d Rather Be Right” and socialized with the likes of composer Richard Rodgers and playwright Arthur Miller. The family — which did not practice Judaism, except for Passover — moved to Connecticut when Grafton was 7.

Grafton dropped out after a year at Swarthmore College to live in an anarchists’ collective on the Lower East Side. She was a regular participant in both the civil rights movement and the anti-war movement.

In 1970, she moved to the Bay Area, finished college and then got a master’s degree at Sonoma State University. She started her own psychotherapy practice and founded the Sonoma Institute, which trained psychotherapists with a feminist slant.

Dembitz grew up in Washington D.C., in a family of Reform Jews and strong Zionists — her maternal grandfather was an associate of Theodor Herzl and her paternal grandfather was a cousin of Louis Brandeis. Her father worked for the Federal Reserve; her mother was a civil rights attorney, until she was accused of having communist affiliations. She was killed in a car accident when Dembitz was 15.

Dembitz graduated from Radcliffe; at Harvard she met her husband, a “red-diaper baby,” as the children of leftists were known as then. After serving in the Peace Corps in Kuala Lumpur, they moved to California and lived off the grid in Humboldt County, where they raised three daughters. Dembitz helped found the B’nai Ha-aretz Jewish Community, a congregation inspired by the Jewish Renewal movement; a one-room non-profit elementary school called the Salmon Creek School; a community credit union and a natural food co-op. With the exception of the food co-op, all still exist.

After Dembitz and her husband divorced, she moved to Berlin in 1991 with a new partner and her youngest daughter. The partner didn’t stay long, but Dembitz and her daughter were happy in Germany. She helped found Die Egalitarische Minyan, the first post-World War II egalitarian Jewish community in Berlin. It remains active today.

Dembitz returned to California in 1995, settling in Berkeley, and began to seriously educate herself about Judaism, becoming active in the Aquarian Minyan. She was in her early 50s then, and “it was like I had a bug in my ear saying, ‘If not now, when?’” she said.

Grafton had been part of the minyan — which was largely composed of fellow East Coast transplants like herself who headed to California to embrace the counterculture — since almost the beginning. Back then, some of the members lived together in a communal house. They included Shefa Gold, a well-known Renewal rabbi, and Burt Jacobson, a rabbi and co-founder of Berkeley’s Kehilla Community Synagogue (now in Piedmont, California), with whom Grafton fostered two children in a non-romantic relationship.

Today, the Minyan consists of about 80 households, most of them around the age of the couple.

“I find Abigail really fascinating,” said Dembitz. “She’s so creative and loving and she’s the head of the ‘let’s do something for fun’ committee in our relationship because I’m kind of a workaholic. She’s brilliant and she comes up with these amazing ideas, and some of them she actually puts into practice.”

Grafton said of Dembitz, “I love that she is sweet and practical, things I’m not particularly, and she’s an unending source of love and constant forgiveness, which I badly need. She is also very smart and wise, and appreciates that I’m smart, too. With men I was always trying to be less smart, less large, less loud and more demure.” 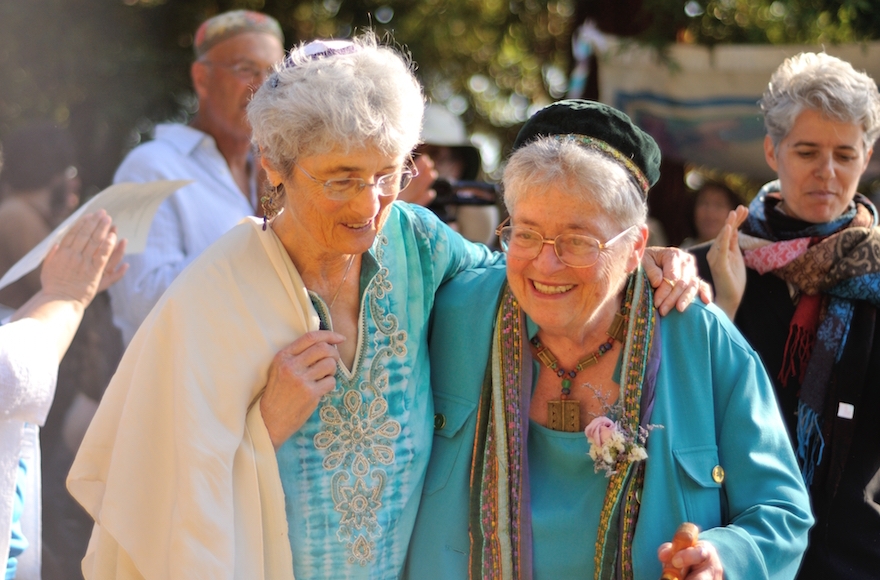 “‘Demure’ is not one of your strong suits,” interjected Dembitz.

“And she introduced me to being a lesbian,” Grafton added. “I’ve been very, very happy since I became a lesbian.”

Though Grafton had been asking Dembitz to marry her for years, Dembitz always declined, saying she didn’t see the point unless it was legal. Once that day came, the couple patiently waited their turn after a few family milestones.

Their wedding was not only a reflection of their personalities, but of the Aquarian Minyan’s past and present.

On Friday, June 24, the couple hosted a Shabbat dinner,  during which their extended families met for the first time. During Saturday morning’s aufruf, a synagogue event to honor an upcoming marriage, Grafton spoke about the pain of the recent mass murder at a gay nightclub in Orlando.

On Sunday, with Grafton’s siblings present, they buried her parents’ ashes in a nearby Jewish cemetery then went out to dinner — courtesy of her parents’ estate. “If you had known my parents, you’d know that they would have loved nothing better than to know that I was finally getting married, and that they were getting to host a rehearsal dinner right after getting buried,” Grafton quipped.

The couple married that Monday afternoon. Prior to the ceremony, each held court at a separate “tisch,” a gathering traditionally reserved for the groom and his male guests. At the Grafton-Dembitz wedding, Karen Roekard, author of “The Santa Cruz Haggadah,” urged guests to find their inner male or female to decide which tisch to attend.

They both wore turquoise: Dembitz in a long caftan; Grafton in a pants suit with a chunky necklace. Grafton walked the aisle with her two brothers and Dembitz was escorted by her three daughters and their families. Their basset hound, Tessie, also was walked down the aisle, while Voices Lesbian A Capella for Justice sang Mozart’s “Overture to The Magic Flute.”

Jacobson and his wife Rabbi Diane Elliot conducted the ceremony.

When they exchanged rings, Dembitz and Grafton presented each other with a ring from their own grandmothers, and said, “With this ring, I consecrate you as my wife in accordance with the emerging traditions of Sarah, Miriam, Devorah, Hannah, Ruth, Naomi, Shifra and Puah.”

Most of those names are probably well known to most Jews, but the couple added Shifra and Puah — two midwives who tried to prevent the slaying of the firstborn by Pharaoh — because, said Grafton, “while we don’t know if they were Jewish, they were conscientious objectors and shit disturbers.”

L’Chaim to marriage equality — but our work isn’t finished