As London prices climb, Manchester beckons Jews from far and near 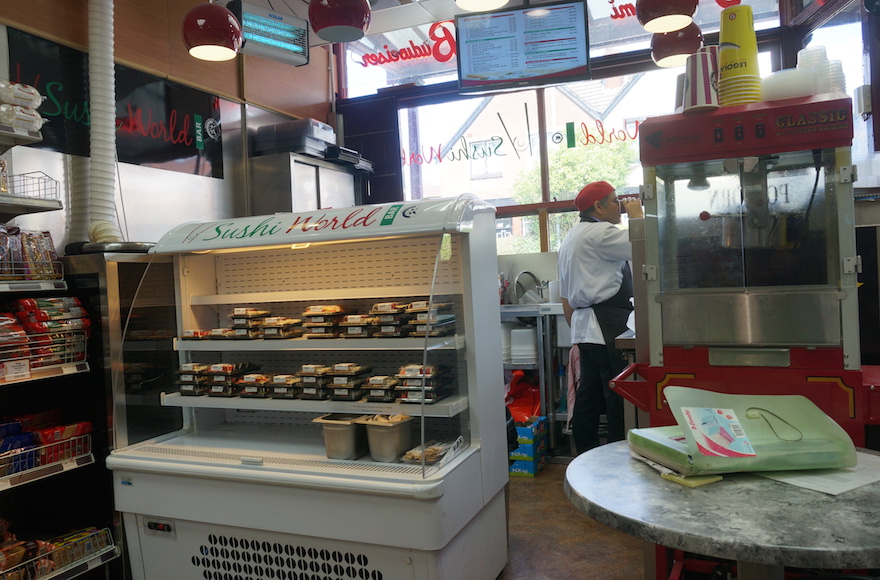 PRESTWICH, England (JTA) — When Yitzchak Horwitz’s family opened one of the first Jewish businesses in this leafy suburb of Manchester — a bookstore that also sold Judaica items — it served a small Jewish community that had only recently moved there from the downtown area.

“The center was run-down after the war, living conditions deteriorated, we had to get out,” said Horwitz, a man in his 80s who runs and owns the Judaica World store that his family opened here in 1960. “A few Jewish families, a small synagogue and that was pretty much it.”

Nevertheless, Horwitz stuck it out. And half a century later, his business is among dozens of Jewish shops servicing thousands of people from the Jewish community of the Manchester area, some 200 miles north of London. Now this community is among the fastest growing in Western Europe, providing Horwitz income from selling Jewish and Hebrew holy books, textbooks and stationery.

At a time when many Jewish communities outside London are dwindling, the one in the Manchester area is growing almost beyond its own capacity due to the high birthrate of its haredi Orthodox nucleus and an influx of Jewish newcomers. The latter is drawn here by the excellent infrastructure for observant Jews and a cost of living that is roughly half that of pricey London.

“People in London seem to think they earn loads more money,” said Selena Myers, a Liverpool-born observant Jewish in her 20s who works at a local Jewish newspaper. Four years ago she moved from London to Manchester, where she lives with her husband. “In fact, the cost of living is maybe three times higher than in Manchester,” whereas the salaries are not. London, she said, “doesn’t make financial sense.”

London is the world’s most expensive city in which to live and work, according to a study published in March by the Savills international real-estate agency. Accommodation for the average Londoner – calculated as a total of housing and office rental costs – comes to $105,000 a year, putting London ahead of New York ($103,000) and Hong Kong ($96,800). 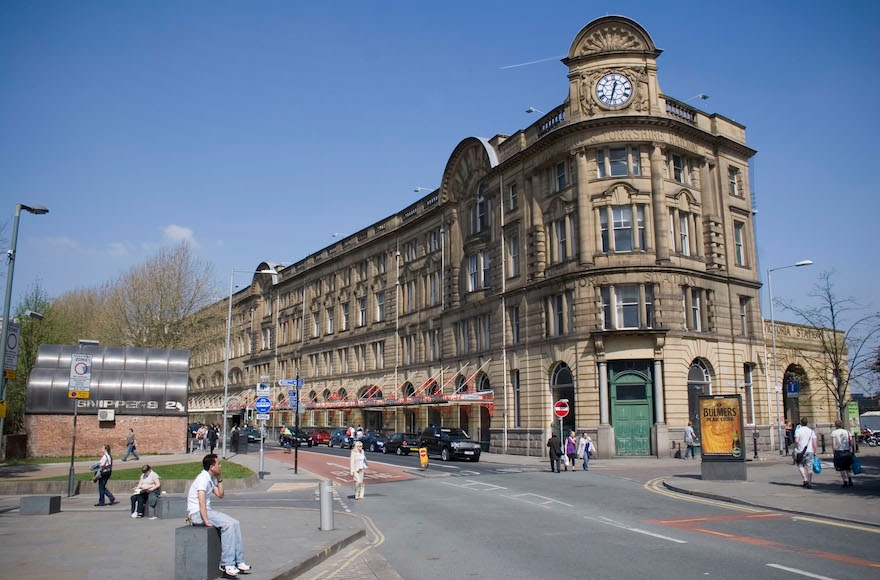 Cost of living is especially important for Orthodox families with many children, like that of Simon Rudich, a Rome-born property investor and lawyer who has raised eight children in Manchester with his British wife.

“If you want to live in England as an observant Jew, which I do, then you have two main options: London or Manchester,” said Rudich. “But you only have one sensible option, which is the one I took.”

The only downside to living in Manchester, he said, “is living without sunshine.” Manchester gets 256 rainy days annually and 34 inches of precipitation – respectively 30 and 21 percent more than London.

When the sun does shine, however, Prestwich is bustling with activity by Jews of all denominations. It has five kosher supermarkets near its center. One features a sushi bar where customers line up for freshly prepared glatt kosher rolls.

There are clothing shops catering to the modest standards of observant women, several kosher butchers, a vegetable shop with exotic produce like gooseberries and mangos from Israel, and a French-style kosher patisserie.

According to a 2011 census by the Institute for Jewish Policy Research, greater Manchester in the previous decade saw a 15 percent growth in its Jewish population, to 25,013. Conversely, the city of Manchester itself lost 463 Jews. It is home to Britain’s second largest Jewish population after London, where most of the country’s 250,000 Jews live.

In Manchester, as elsewhere in Western Europe, Jewish families that once lived in middle- and working-class areas of the city have moved into the suburbs, partly to improve their quality of life. Another reason for moving has been the arrival of poorer African and Arab immigrants to neighborhoods that often saw an uptick in crime and, more recently, anti-Semitic harassment.

“I chose Manchester because I’m from South Africa,” said Dianna Schwartz, an observant mother of four. She immigrated five years ago to Prestwich from Cape Town because of what she described as “a deteriorating security situation after 1994,” the year apartheid ended.

“I can’t live in a London apartment, I need space and green. That’s how I grew up,” she said. “But getting that in a part of London that is near a proper Jewish school is just impossible for us.”

Manchester’s Jewish influx has left its 12 or so Jewish schools and kindergartens in need of more space and staff, which has helped generate work, particularly for women.

“When I first moved here, people immediately assumed I was a teacher,” said Myers, the newspaper office worker. “They’d ask me straight away where I teach.”

While Manchester remains significantly cheaper than London, the influx is nonetheless driving up prices and creating a housing shortage in the city’s heavily Jewish areas.

“You’re already seeing new Jewish presence in areas around Prestwich, which used to have no Jews in the past,” Myers said.

Manchester is not the only affordable city in northern Britain with an active Jewish community; Liverpool, Leeds and Bristol all have them. Yet Manchester emerged as the largest because it retained an observant and haredi nucleus, which over time produced community institutions that cemented it as the epicenter of Jewish life outside London, according to Rabbi Hillel Royde of the Manchester Beth Din, or rabbinical court.

Thus Manchester is the only city in northern England with a large haredi school. Myers and her siblings attended school in Manchester for that reason even when they were living in Liverpool, she said. 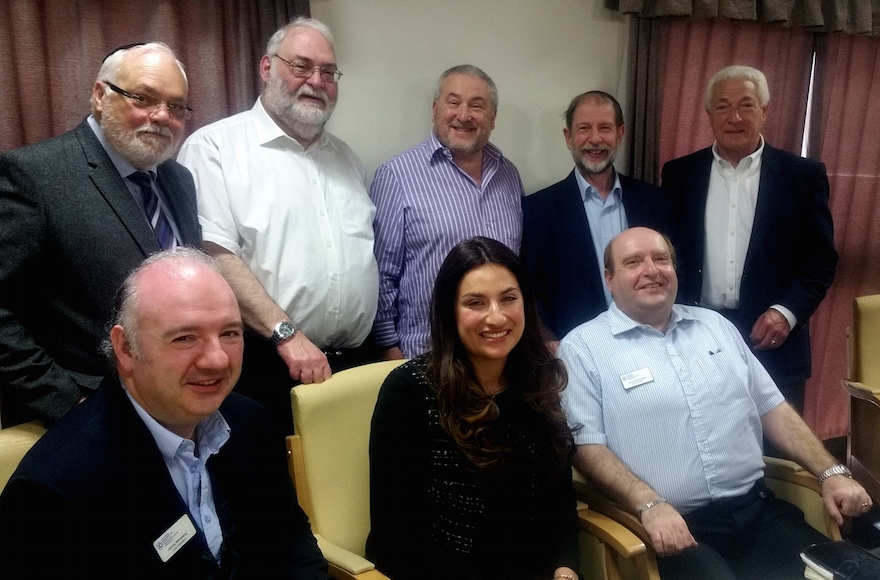 This inbound traffic is “creating some problems that are nice to have, but they are nonetheless problems,” Royde said.

His rabbinical court is one of the community’s main tools for solving those problems. Established in 1902, when heavy industry attracted thousands of Jewish immigrants from Europe to the area, the court served 30 butcher shops, supervising ritual slaughter across the region.

Over time it has taken over kashrut supervision for the large food producers in the Manchester area, including the cereal giant Kellogg’s. Supervision fees from such companies are invested back into the community and used to open new schools and fund projects that make Manchester even more attractive for observant Jews — like setting up eruvs, symbolic boundaries that allow observant Jews to carry objects on Shabbat.

In 2014, the Manchester suburbs became the site of Britain’s largest eruv, a 13-mile perimeter that includes Prestwich, Crumpsall and Higher Broughton. Without an eruv, haredi families with children would effectively go into weekend curfews. But setting them up is an expensive and complex process that requires city permits and installing braces, strings and poles to discreetly cordon off the area. Work is ongoing on another eruv in the Manchester suburb of Hale.

These improvements have made life easier for thousands of haredi Jews and are attracting thousands more. And that is changing the nature of a community that, according to Myers, is losing its middle ground.

“Nowadays it’s either you’re very observant or almost not at all,” she said. “It didn’t used to be like that.”