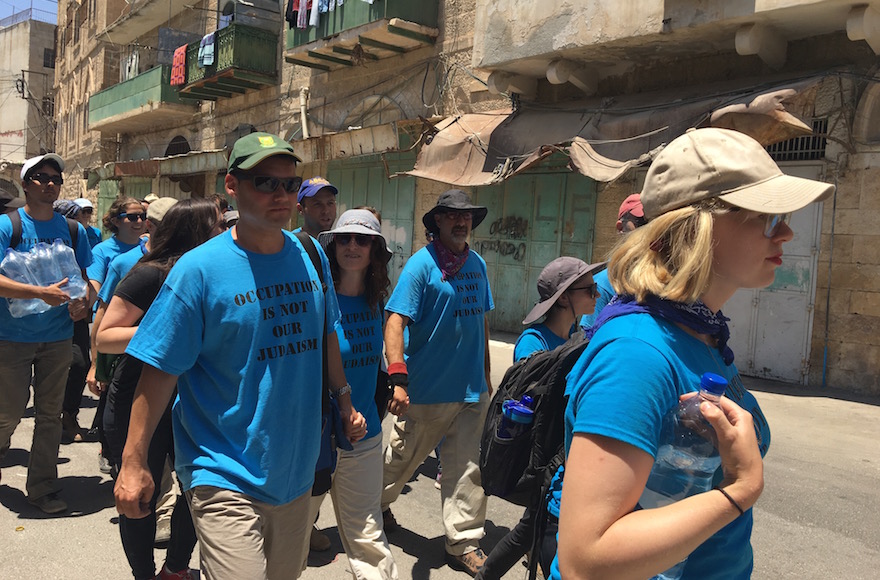 Peter Beinart, left, marching with, with other activists from the Center for Jewish Nonviolence, including, to his right, the movement's CEO, Ilana Sumka, through Hebron, July 16, 2016. (Andrew Tobin)
Advertisement

On hand to help were some bold-faced names in the American Jewish community’s Israel debate, including Peter Beinart, a leading liberal U.S. Jewish thinker, and Amna Farooqi, the Muslim president of J Street U.

The activists used tactics familiar from the U.S. civil rights movement to provoke Israeli authorities in Hebron — the most volatile city in the West Bank and the site of frequent clashes between Israelis and Palestinians. When many of the activists staged a sit-in and refused a military order to leave a Palestinian property, Israeli police detained six of them with dual Israeli citizenship.

Though anti-occupation demonstrations in the West Bank are nothing new, such a large group taking action under the banner of American Judaism is.

The some 45 Americans and other Diaspora Jews came to the West Bank earlier in the week with the Center for Jewish Nonviolence, a new movement that organizes Diaspora Jews to challenge Israeli rule in the West Bank. The 10-day trip is dedicated to community service and political action on behalf of the Palestinians.

The activists expressed confidence they were part of a historic shift.

“I feel like I’m seeing the emergence of a new leadership. It’s really remarkable,” Beinart told JTA. “People will try to write these guys off as lefties that don’t have any connection to the Jewish community. But it’s amazing when you talk to them, these kids actually come from the bosom of the Jewish community. A lot of them are affiliated. A lot of them are doing this without the knowledge of their families, with a lot of pain in their families.”

On the schedule Friday was an action in partnership with Palestinian and Israeli activists to turn what they said was a forsaken Palestinian metal factory in the Israeli-military-controlled areas of Hebron into the city’s first Palestinian movie theater. They expected to be disrupted by police and possibly arrested.

During the bus ride from their hotel in Bethlehem to the factory, the activists sang “Olam Chesed Yibaneh” (“The World is Built with Loving Kindness”) in English and Hebrew. Most were American Reform or Conservative Jewish millennials from major American cities like San Francisco, Chicago and New York. But older generations, Orthodox Judaism, and Europe and Australia were represented as well.

The activists have deep Jewish ties. Many belong to left-wing Israel advocacy groups such as J Street and the New Israel Fund, and others to groups that more deeply divide the pro-Israel community, including Jewish Voice for Peace, which supports the Boycott, Divestment and Sanctions movement against Israel, and IfNotNow, which holds its own sit-ins at U.S. Jewish groups.

Ethan Buckner — a 26-year-old organizer for an environmental group in Berkeley, California, and a singer-songwriter with a eyebrow piercing — said he had avoided confronting the Israeli-Palestinian conflict for most of his life. But he said Israel’s “murder” of Palestinian civilians during the 2014 Gaza War pushed him to get involved with IfNotNow protests. 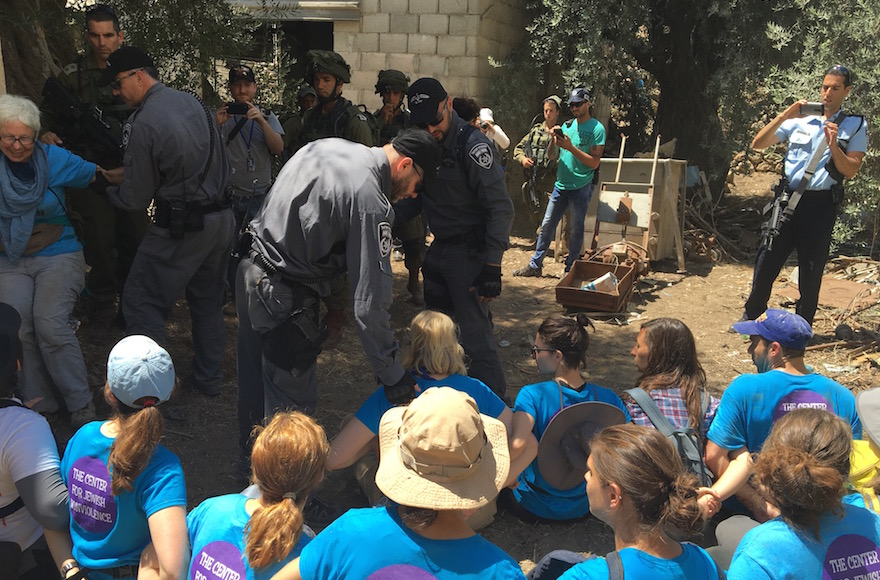 Israeli authorities removing activists from the Center for Jewish Nonviolence from property in the West Bank city of Hebron, July 16, 2016. (Andrew Tobin)

Buckner said his father, a Conservative cantor in Minnesota, had previously tolerated but not endorsed his anti-occupation activism. Sharing with his dad his firsthand experiences of “how the occupation is a nightmare” for Palestinians and also Israelis seemed to have an effect, he said.

“Those stories and photos really moved him in a way that I haven’t seen him moved before to really start to also take responsibility. I think there’s a growing sense of understanding of how American Jews share responsibility for what is happening,” he told JTA.

At the Palestinian property — a dirt lot with several low-slung cement structures — the Center for Jewish Nonviolence activists were joined by their Palestinian and Israeli partners. The dozen or so Palestinians were part of a local movement called Youth Against Settlements. The handful of Israelis were from All That’s Left: Anti-Occupation Collective, a Tel Aviv-based group that engages Diaspora Jews. More activists from the Israeli group had tried to join, but their bus was turned back by police at the Gush Etzion Junction en route from Tel Aviv.

One of the Palestinians, Jawad Abu Aisha, said the property was declared a closed military zone at the start of the second intifada in 2001, and even since that order was lifted in 2008, he was kept from reclaiming the factory by military and settler harassment. The activists said this was a common experience for Palestinians with property in the Israel-controlled section of Hebron.

Hebron is home to some 200,000 Palestinians and fewer than 1,000 Israeli settlers, who live under heavy military protection. The city, religiously significant to both Jews and Muslims, has long been a hothouse of Jewish-Palestinian violence. Many of the Palestinian terrorists involved in the recent wave of terror against Israelis have come from Hebron. In March, an Israeli soldier shot to death a felled Palestinian attacker.

Working with foreigners is central to Youth Against the Settlements’ strategy for supporting fellow Palestinians living in Hebron — and so much the better if those foreigners happen to be American Jews, according to a leading activist in the movement, Mutasem Hashlamoun.

“Palestinian media is always at our protests, but there is much more international media here for this group,” Hashlamoun told JTA, gesturing toward the many journalist documenting the activists. “For Palestinians, too, who only see the settlers and the soldiers and think Jews are just against them in everything, having Jews chanting against the occupation helps change their mindset.”

After sneaking onto the property, the activists got to work clearing scrap metal, weeds and debris and — once it was clear they had been spotted — singing Jewish and protest songs. Amid the work, bags of popcorn labeled “Cinema Hebron” were passed around, and a handmade sign that read “Cinema Hebron: Coming Soon” was triumphantly erected.

Meanwhile, a growing number of soldiers, police officers and settlers gathered on the street. They recorded the activists, and the activists recorded them. One of the settlers, a longtime Hebron resident named Tzipi Schlissel, told JTA the Palestinians were using the activists as a weapon against the Jews. She said the property they were cleaning up had been used by terrorists in the past.

“[The activists] think they’re doing a good thing, but they’re really helping the terrorists,” said Schlissel, whose father, a prominent settler rabbi named Shlomo Ben Raanan, was killed by a Palestinian terrorist in 1998. “I’ll tell you, in the Holocaust, Jewish people helped Hitler, too.”

After a few hours of work, a dozen soldiers and police officers entered the property to declare it a closed military zone. Thirty or so activists sat on the ground, locked arms and sang “Lo Yisa Goy,” a Hebrew song about peace. The authorities quickly pulled up the activists one by one and shepherded them up the street. Ethan Buckner, second from left in front, and other activists from the Center for Jewish Nonviolence protesting outside the jail in the West Bank Jewish settlement Kiryat Arba, July 16, 2016. (Andrew Tobin)

Ilana Sumka, the CEO of the Center for Jewish Nonviolence, said the authorities’ apparent reluctance to detain American Jews validated her movement’s approach.

“I take that as evidence that there’s tremendous power in our strategy. Right? Because the Israeli military didn’t want to have a skirmish with American Jews, I think because they understand the American Jewish community is essential to Israel’s future,” she said. “We’re already planning our next nonviolent campaign, which will take place around the milestone of 50th anniversary of the occupation next summer.”

Israel gained control of the West Bank following the Six-Day War in 1967.

An officer at the Kiryat Arba police station referred JTA to the Israel Police for comment. The police did not respond to questions about the reason for the arrests or the targeting of Israeli citizens.

In response to a JTA inquiry, the Israel Defense Forces said: “On Friday, June 15, dozens of people gathered on a property in Tel Romeda. The gathering evolved into a disturbance of the peace, including clashes with IDF forces. In order to prevent escalation into violence, the Military Commander ordered the closure of the area. Accordingly, non residents were required to leave the premises.”

After being evicted from the property, most of the activists set off for the police station where the detained Israelis were being held, in the neighboring religious Jewish settlement of Kiryat Arba. Singing and holding hands, they marched across town — down the empty and heavily militarized Al-Shuhada Street and past the Tomb of the Patriarchs. At various points friendly soldiers and a Druze police officer helped guide them.

Once at the station, the activists demanded the release of the Israelis and were refused. That led to more sitting, singing and chanting in the hot afternoon sun.

Soldiers and settlers – swaggering teenage boys in knit kippahs and giggling young girls – were bewildered by the Jews protesting outside their homes in Hebrew. One settler boy held out his phone so his friend on the other end could hear their singing. Some of the girls took photographs and video, but protested when cameras turned toward them.

Activists were asked to translate their bright blue shirts, which read: “Occupation is not our Judaism.”

At one point, a soldier pulled out of the prison gate in a white jeep and sang along with the activists over the car’s loudspeaker, briefly raising hopes that he was a supporter. But he ended his performance by chanting “oc-cu-pa-tion,” pumping his fist to the tune. Other soldiers laughed.

Around 2 p.m., the activists left the Israelis in the hands of legal counsel and, declaring a victory of sorts, headed to a late lunch. The Israelis were released just ahead of Shabbat and banned from Hebron for two weeks. The Center for Jewish Nonviolence activists are set to fly home Wednesday. Cinema Hebron will have to wait.

‘Reverse Birthright’ gives Israelis a look at America’s Jews, from Philip Roth to the Three Stooges