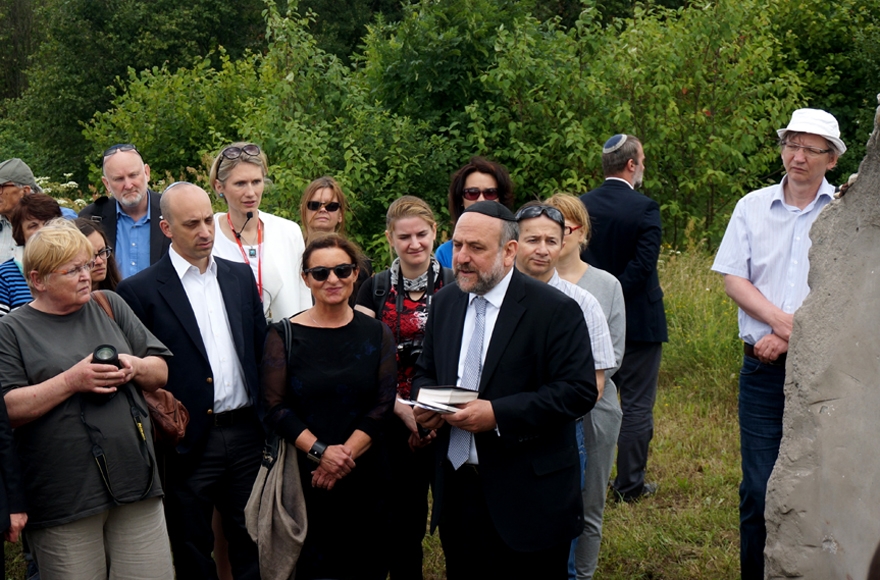 (JTA) — Several Jewish organizations condemned recent statements by Polish officials that the critics see as detrimental to historical accuracy on the Holocaust and World War II.

The Federation of Jewish Communities of Russia last week took aim at Polish Defense Minister Antoni Macierewicz for telling the public broadcaster TVP that Russians were actually behind the mass killing of Jews and Poles that mainstream historians attribute to Ukrainian nationalists and Nazi forces.

The statement by Macierewicz, who has a history of making statements viewed as anti-Semitic, comes amid other controversies surrounding allegedly revisionist statements by Polish Education Minister Anna Zalewska and other officials on the historical record of Jedwabne, a town where Poles killed hundreds of Jews in 1941.

Jaroslaw Szarek, the newly elected president of the Polish state’s Institute of National Remembrance, recently told a parliamentary committee that “the perpetrators of this crime were the Germans, who used in their own machine of terror a group of Poles.”

His own institution is on record as saying the act was perpetrated by Poles, though two historians from the same institution recently said an exhumation was necessary to determine what happened in Jedwabne. One of them, a deputy  director, said Poles who killed Jews at Jedwabne were avenging Jewish mobilization to oppress ethnic Poles during the occupation of Poland’s east by the Soviet Union from 1939 to 1941.

Zalewska remained noncommittal in a television interview on the matter last week, saying she could not determine who killed Jews at Jedwabne. In a statement Thursday, World Jewish Congress President Ronald Lauder demanded Zalewska apologize. He noted that Macierewicz, her colleague at the right-wing Law and Justice Party that won the general election last year, also cast doubt on Jedwabne.

“Is the hubbub surrounding Jedwabne intended to eclipse the responsibility of Jews for Communism and the Soviet occupation?” Macierewicz wrote in 2001, according to Lauder.

In the JVP interview last week, Macierewicz spoke of the Volyn massacres that Ukrainian nationalists perpetrated against ethnic Poles in 1941-43 under the auspices of the German Nazi occupation of Poland and Ukraine. In parallel, the Ukrainian nationalists assisted in the killing of some 200,000 Volhynian Jews.

“We should not be prevented from seeing that the real enemy, the one who used parts of the nationalist Ukrainian forces for this terrible crime of genocide, seems to be Russia,” Macierewicz said.

Boruch Gorin, a senior rabbi within the Russian Jewish group, was quoted by the Kresy news website as saying that Macierewicz “sacrificed historical memory in favor of a false one for political gain” and to the detriment of Polish-Russian relations.

In recent weeks, the Polish newspaper Gazeta Wyborcza unearthed earlier revisionist statements by Macierewicz on the Holocaust. In 1996, he wrote in the newspaper Glos, in which he worked as an editor, that Poles did not kill Jews in the town of Kielce in 1946, despite ample historical proof that dozens of Holocaust survivors were killed there by Polish police and civilians.

“It’s a brazen lie and a defamation to accuse the Polish people of the Kielce crime,” Macierewicz wrote in Glos, according to investigative journalist Tomasz Piatek. “It is not acceptable that Jews and communists are the only ones that are to investigate these documents,” he also opined, adding: “We have to create a National Tribunal at least to defend us against the defamers.”

Last year, the Anti-Defamation League urged the Polish government to reconsider its nomination of Macierewicz, citing his statement in 2002 in which he said that the anti-Semitic forgery “The Protocols of the Elders of Zion” contains some truth.

Separately, the president of the Union of Jewish Communities in Poland, Leslaw Piszewski, complained in an interview for the Judische Allgemeine that the Law and Justice’s government under President Andrzej Duda was ignoring the community and delaying restitution of property nationalized from Jews during communism.