Wasserman Schultz: Trump’s no anti-Semite, but he sanctions anti-Semitism 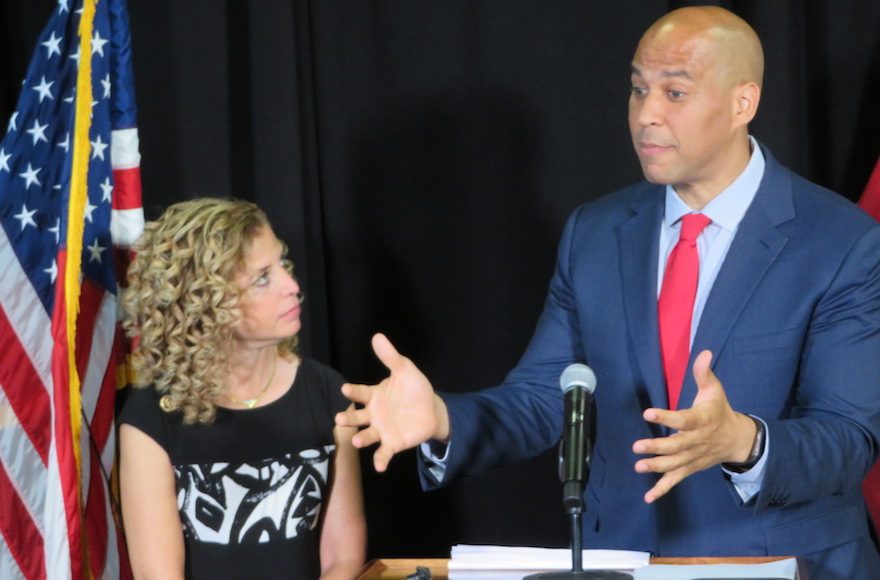 Sen. Cory Booker, D-N.J., speaks out against what he calls the "hate" emanating from the republican convention in Cleveland while Rep. Debbie Wasserman Schultz, D-Fla, the chairwoman of the Democratic National Committee, looks on, on July 21 2016. (Ron Kampeas)
Advertisement

CLEVELAND (JTA) — Debbie Wasserman Schultz wants you to know: Donald Trump has enabled anti-Semitism, sanctioned it, tainted his party with it – but is not an anti-Semite.

I spoke with the Florida congresswoman and the chairwoman of the Democratic National Committee on Thursday, a day after she told reporters in a conference call that the “anti-Semitism that is threaded throughout the Republican Party of late goes straight to the feet of Donald Trump.”

On Thursday, she tweaked her message: ““I am not calling Donald Trump an anti-Semite,” she told me, instead arguing that his flirtation with anti-Semites and other extremists has unleashed a strain of the affliction.

Paul Manafort, Trump’s campaign chief, dismissed the charge when I put it to him Thursday morning. “We’ve got rabbis, we’ve got bishops here,” he said. What about the white supremacists and anti-Semites I and my colleague Ben Sales have encountered? “I don’t control who’s in the protests on the streets,” he said.

Democrats are in Cleveland, where the Republican convention concludes tonight, to make their case. (Republicans will return the favor in Philadelphia next week.) The overarching theme is the intolerance they say has been unleashed by Trump’s campaign, and by the candidate’s broadsides against Muslims, Hispanics and women.

Just prior to our interview, Wasserman Schultz had appeared at a press conference with Sens. Al Franken, D-Minn., and Cory Booker, D-N.J., where they joked about kasha (Wasserman Schultz makes it, Franken was raised on it, and Booker has more recently embraced it at Franken’s behest). But they also took aim at the at times heated rhetoric here, where there are buttons using epithets to describe Democratic nominee Hillary Clinton, and where there have been calls for her imprisonment and even her execution.

“No one is condemning this in the Republican Party,” Booker said. “No one is coming out and saying ‘that’s not what America is.’”

I challenged Wasserman Schultz specifically on the anti-Semitism charge: One could indeed pin down statements where Trump has generalized, in a negative way, about Latinos, Muslims and women. But did she believe the Republican nominee himself was an anti-Semite? Could she identify anti-Semitic remarks he made?

Was she accusing the entire party of anti-Semitism?

“Donald J. Trump has certainly made anti-Semitic statements and posted anti-Semitic tweets,” said Wasserman Schultz, who is Jewish and has made that a hallmark of her political identity. She had a list on an iPad Mini, and began with his remarks last year to the Republican Jewish Coalition, when he praised the room’s collective negotiating skill and predicted they would not favor him because he did not want their money.

I pointed out to Wasserman Schultz that Jonathan Greenblatt, the Anti-Defamation League director and a former Obama administration official, gave Trump a pass for those remarks, arguing that they were not atypical for a businessman addressing a room full of businessmen – that they did not necessarily carry an anti-Jewish taint.

She moved on to the infamous star tweet. (Trump posted a tweet accusing Clinton of corruption, with an image of her head atop a wad of cash and alongside a six-pointed star. His staff changed the star to a circle when it was pointed out that the image originated on the alt-right, a redoubt of anti-Semitism, and that it looked like a star of David. Trump later said he regretted the change and would have preferred to defend the image.)

“Through that tweet and, again, his pattern of denying things that are obvious, he’s demonstrated an utter lack of sensitivity and understanding about messages and communication that is hurtful to the Jewish people,” she said. The other actions she cited included his slow, reluctant disavowal of the support of David Duke, the former Ku Klux Klan leader. “In the Jewish community, we want to make sure that anti-Semitism doesn’t rear its ugly head any longer because we know what it has led to in the past,” she said.

What about tainting all Republicans as anti-Semitic? Did that extend to her congressional colleagues? I pointed out that Wasserman Schultz has co-sponsored legislation with Rep. Ileana Ros-Lehtinen, R-Fla., to assist elderly Holocaust survivors.

She seemed taken aback that her remarks would be taken that way, and made clear she thought her Republican colleagues for the most part were “wonderful supporters of Israel and have good relationships with their Jewish communities.”

She clarified that she was referring to what was happening to the party since Trump effectively became its leader, noting the proliferation of anti-Semitism in his support on social media. Earlier this week, the former Hawaii governor, Linda Lingle, spoke at the convention urging Jewish support for Trump; the convention YouTube livestream was shut down after it became flooded with anti-Semitic abuse by self-described Trump supporters.

As she was about to leave, she turned around and told me: “I am not calling Donald Trump an anti-Semite,” she said. “He has sanctioned anti-Semitism, made anti-Semitic remarks and given permission to an anti-Semitic thread running through his campaign that leads to his feet.”

Notably, between Wednesday and Thursday, the path of the thread she described had changed from the entire Republican party, and was now confined to Trump’s campaign.