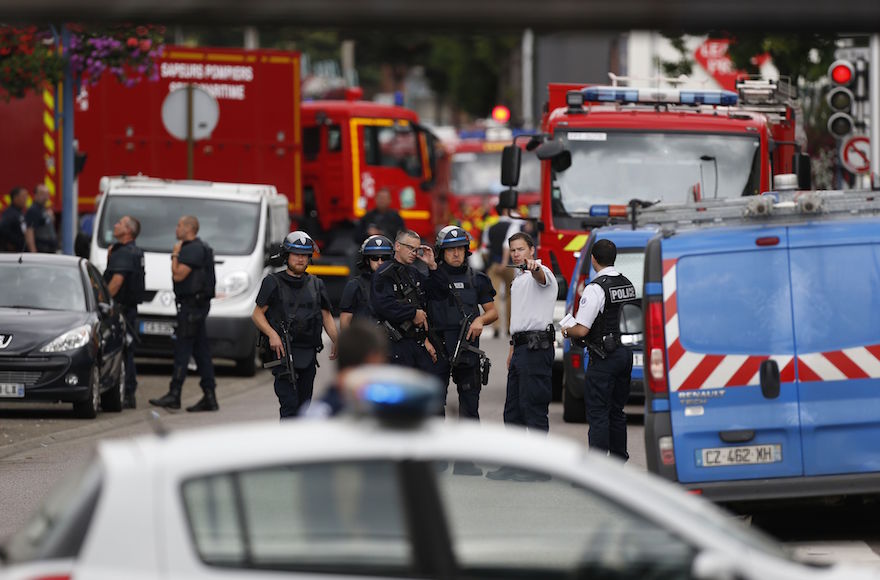 French police officers and fire engine at the scene of a hostage-taking at a church in Saint-Etienne-du-Rouvray, northern France, July 26, 2016. (Charly Triballeau/AFP/Getty Images)
Advertisement

(JTA) — An attack on a Catholic church in northern France that saw an 84-year-old priest killed is an attack against all religions, the head of the European Jewish Congress said.

Two assailants who had pledged allegiance to the Islamic State also critically wounded at least one other person during the Tuesday morning attack in Saint-Etienne-du-Rouvray, a suburb of Rouen about 65 miles northwest of Paris. They shouted “Allahu Akbar,” or “God is great” in Arabic, before slitting the priest’s throat, according to reports.

The terrorists were shot and killed after taking the priest, two nuns and two parishioners hostage during morning Mass. Following the siege, the Islamic State claimed the two men as its “soldiers.”

“An attack against a religious institution and a man of God is an attack against all religions and faith itself,” Dr. Moshe Kantor, president of the European Jewish Congress, said in a statement following the attack. “This dastardly attack will only strengthen our resolve to defeat the enemy of Islamist terrorism.

“This attack targets us all decent Europeans, Christians, Jews and Muslims alike,” he said.

Israeli President Reuven Rivlin called on the free world to “fight to defend” our values.

“This attack shows the true face of the brutal nature and horror of terrorism,” he said. “This is an attack by radical extremists, terrorists, who have struck at the very symbol of peace and murdered in cold blood in a house of God, while they pretend to speak in His name.”

Rivlin also said that Israel “stands side by side with the people of France.”

“The whole free world must understand that our values are under attack. We must fight to defend them, lest we be overtaken by waves of intolerance and hatred,” he said.