Venice welcomes back Shylock in marking its Jewish history 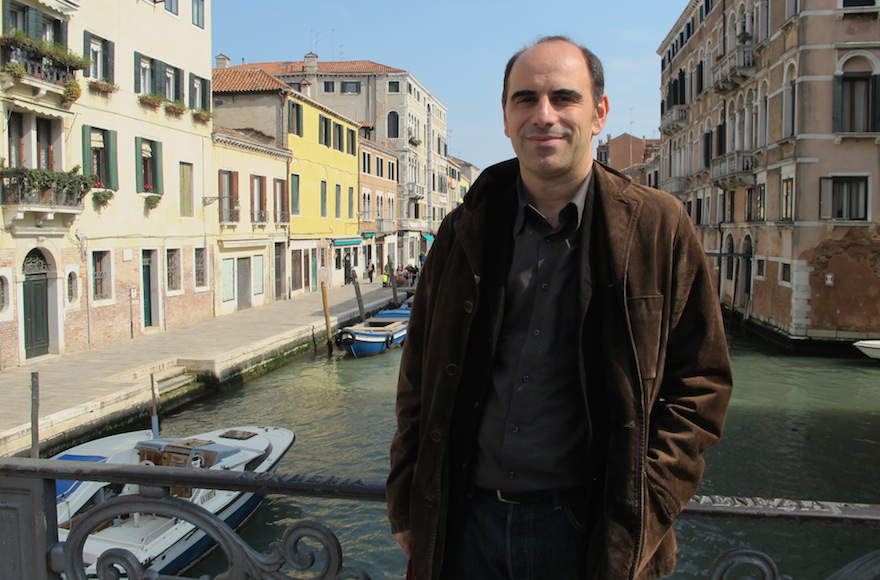 VENICE, Italy (JTA) – Last week, an international, multilingual cast performed Shakespeare’s controversial play, “The Merchant of Venice,” in the secluded main plaza of the city’s historic Jewish Ghetto. It was the first time the play was performed in the iconic location.

Enclosed by tall tenements and the arched windows of 16th-century synagogues, audiences — U.S. Supreme Court Justice Ruth Bader Ginsburg among them — gathered to see six sold-out performances of “The Merchant in Venice,” a production of the Compagnia de’ Colombari theatre company and Venice’s Ca’ Foscari University. The six performances were part of a year-long commemoration marking the 500th anniversary of the imposition of the Ghetto.

The performances also marked the 400th anniversary of Shakespeare’s death.

The play, a mock retrial of the play’s Jewish villain, Shylock, and scores of other exhibits, conferences, concerts and other initiatives of the 500th anniversary program aim to reckon with the Shylock story and provide perspective to the actual Jewish experience in Venice — past, present and future.

“It is important that people recognize that Jews are a part of Venetian society — that it wasn’t just the Ghetto,” said historian Donatella Calabi, who curated a major exhibition called “Venice, the Jews, and Europe: 1516-2016” at the Doge’s Palace, one of the city’s main landmarks.

The exhibit at the Doge’s Palace, a centerpiece of the anniversary year, includes art, artifacts, documents and interactive installations that explore both the segregation of Jews in the ghetto, as well as the rich cultural and other exchanges between Jews and non-Jews that took place even during the period.

“We show the long history of Jews in Venice,” said Calabi.

In the “Merchant” production, five different actors, including one woman, played Shylock. The idea, the play’s dramaturge, Walter Valeri, explained in the program notes, was to “make him slip out of his single, unique skin to underscore how each one of us is indeed Shylock.”

The audience saw Shylock seek revenge after his daughter Jessica stole his jewels and eloped with a Christian, Lorenzo. They saw him thwarted in his demand for a pound of flesh from the merchant Antonio, who defaults on a loan. And they saw him defeated, his property seized, condemned to convert to Christianity.

“I didn’t expect to be so engaged,” Grammy award-winning Frank London, who composed and performed the music for the production, told JTA. “I’m surprised at my personal reaction at the heavy invective in the play thrown against Jews… the total dehumanization of Jews.”

In the play, he said, “there is no criticism of anti-Semitism. They are all anti-Semites, they don’t give a damn; it’s the world they live in. They don’t care.”

Shakespeare never visited Italy and probably never met a Jew. And yet, over the centuries, the fictional Shylock has arguably become the most famous, and notorious, Venetian Jew of all times, overshadowing real history and real personalities.

Ca’ Foscari professor Shaul Bassi, the coordinator of the Venice Ghetto 500th anniversary committee set up by the Jewish community and the city, calls Shylock “an imaginary figure that has been haunting this place for centuries.”

Ginsburg’s grandson, actor Paul Spera, played Lorenzo in the production. On July 27, Ginsburg presided over a mock appeal by Shylock against the judgment brought by Shakespeare’s Venetian court.

Before hundreds of sweltering spectators in the opulent main hall of the Scuola di San Rocco, Ginsburg and four other judges, including U.S. Ambassador to Italy John R. Phillips, ruled in Shylock’s favor, ordering his forced conversion nullified and his fortune returned.

The anniversary events kicked off March 29, marking 500 years since the day the Venetian Senate, under the Doge Leonardo Loredan, ordered the 700 or so Jews in the city to be enclosed in a cramped area that had once been the site of a foundry — “geto” in the Venetian dialect. It was the first time that European rulers segregated Jews behind locked gates.

Jewish leaders in Venice have stressed that the anniversary events aren’t a “celebration” but a time for reflection. “We are not celebrating that there was the ghetto, but the creative response of Jews and their allies to the limitation of liberty to which they were subjected,” Bassi said. 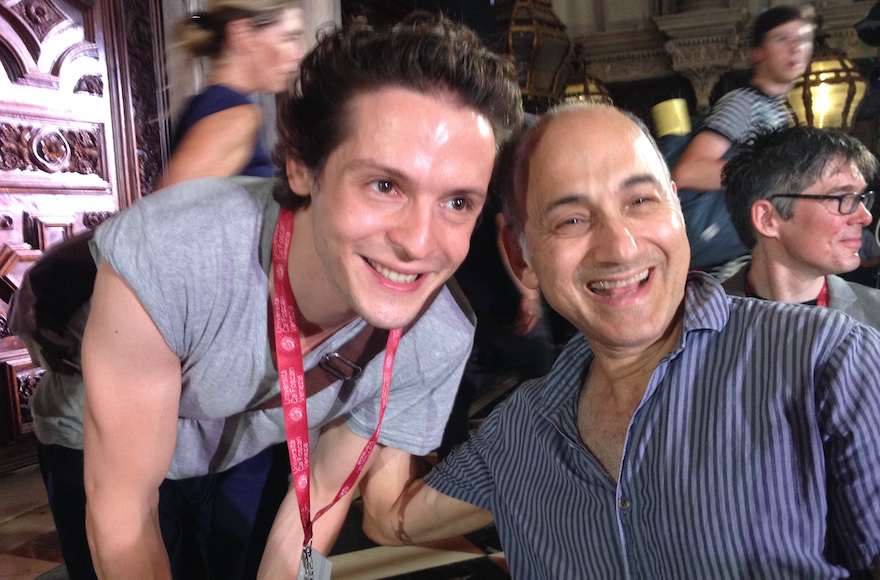 Actors Paul Spera, Ruth Bader Ginsburg’s grandson, who played Lorenzo, left, and Ned Eisenberg, who played one of the Shylocks in the Venetian production of “The Merchant in [sic] Venice.” (Ruth Ellen Gruber)

“We are looking at the past to build our future,” he added. “The anniversary gives us visibility. The follow-up is the big challenge.”

How to do this – and what to do — remains an open question.

Yet the Jewish community in Venice today numbers fewer than 450 people. Few of them live in the Ghetto neighborhood, and their numbers are dwarfed by the thousands of tourists who visit the Ghetto each year.

Bassi and other Jewish leaders hope that the visibility brought by the anniversary will pique international interest that will bring Jews and others to Venice — not as tourists but as students, scholars and artists who will stay for longer periods and interact with local Jews.

“The Venice Jewish community should be a point of reference for people who decide to come here and stay for a semester or a year of study,” said Venice’s chief rabbi, Scialom Bahbout, who hopes to foster an exchange program of religious scholarship and also reach out to unaffiliated Jews.

Other plans include revamping the Jewish Museum as an international center and hub of the revitalized ghetto.

“The responses are varied – to have cultural events, Jewish education, restore buildings,” said Lenore Rosenberg Bahbout, Rabbi Bahbout’s wife, who was born in the U.S.

“There are a lot of different solutions, but that’s what gives this whole experience a meaning,” she said. “People are going to have to talk about it. Something like the ‘Merchant,’ the exhibit, conferences – if they can raise awareness of what the Ghetto meant in the past – that’s a jumping off place.”