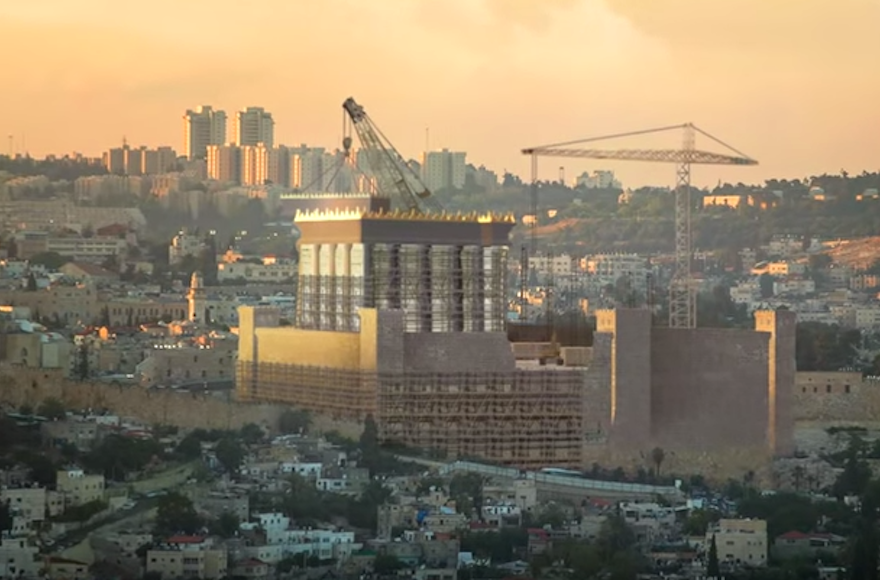 A video supporting the Temple Institute’s Indiegogo fundraising appeal features a simulation of a rebuilt Holy Temple on the site of the current Temple Mount in Jerusalem. (YouTube)

JERUSALEM (JTA) — The Temple Institute, dedicated to reestablishing the Holy Temple in Jerusalem, announced it is opening a school for training Levitical priests for their eventual service in a new temple.

The institute ran several pilot programs in recent years and now “is embarking on a mission to teach Kohanim all the practical skills required to serve in the Third Holy Temple,” it said in a statement.

The institute has opened an Indiegogo crowdfunding campaign to raise at least $75,000 for the project.

The institute advocates what many in the region — including a number of Orthodox Jews — see as a radical goal: replacing the Dome of the Rock with a new Jewish Holy Temple. Muslim fears that Israel will change the status quo that has kept the site in control of a Jordanian authority, known as the Wakf, has led to repeated clashes over the years and inspired a recent wave of terrorist attacks aimed at Israelis.

The institute has reconstructed nearly all of the sacred vessels needed to perform the services in a rebuilt Temple, including the High Priest’s breastplate featuring the 12 precious stones of the tribes of Israel, the half-ton golden menorah and the musical instruments of the Levitical choir.

The curriculum at the Nezer HaKodesh Institute for Kohanic Studies will include courses on the Temple service, theory and practice and the role and application of modern technology in the Third Temple, according to the Institute.

“We are extremely excited to announce this new step towards the restoration of the Holy Temple service. We call first and foremost upon Kohanim worldwide to support this special project, which signifies a return to their birth right. We have chosen to use Indiegogo as a tool to enable as many people as possible to be a part of this historic initiative,” Rabbi Chaim Richman, international director of the Temple Institute, said in a statement.

The second Temple was destroyed by the Romans in 70 CE.