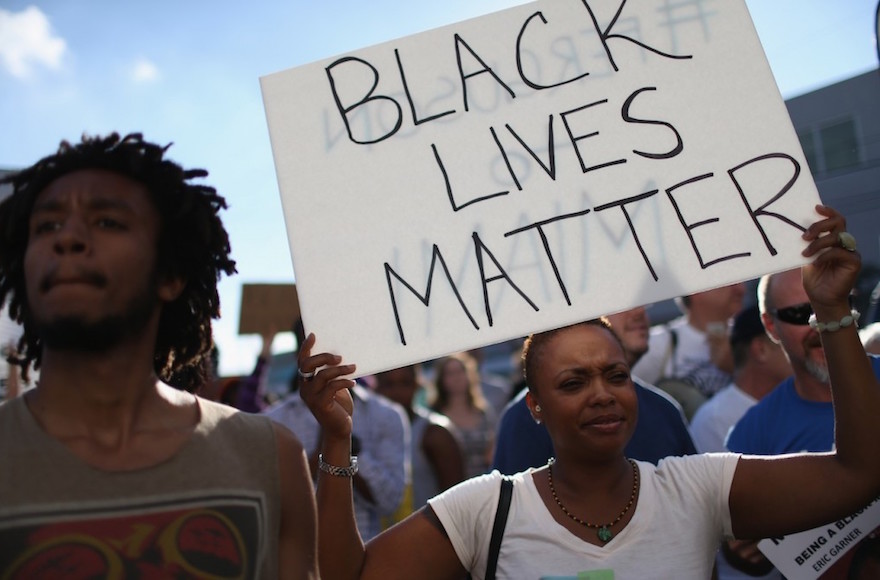 Demonstrators in Miami, Fla., protesting the failure of grand juries to indict the police officers responsible for the deaths of Michael Brown in Ferguson, Missouri and Eric Garner in New York. (Joe Raedle/Getty Images)
Advertisement

NEW YORK (JTA) — A rabbinic human rights group has criticized the platform of the Black Lives Matter movement for accusing Israel of genocide against the Palestinians.

The platform, published Monday by a coalition of more than 50 organizations called the Movement for Black Lives, includes a section criticizing United States aid to Israel, as well as Israel’s treatment of the Palestinians. It calls on the U.S. to end military aid to Israel and Egypt, and accuses Israel of practicing apartheid.

In a statement Wednesday, T’ruah: The Rabbinic Call for Human Rights endorsed many of the platform’s demands concerning economic justice, mass incarceration and law enforcement, but criticized its section on Israel. T’ruah’s statement condemned Israel’s occupation of the West Bank, but said the group was “extremely dismayed at the decision to refer to the Israeli occupation as genocide.”

T’ruah also criticized the platform for not mentioning Palestinian attacks against Israeli civilians, including rocket attacks from Hamas, the militant group that governs Gaza. The statement added that T’ruah does not support BDS, the campaign to boycott, divest from and sanction Israel.

“While we agree that the occupation violates the human rights of Palestinians, and has caused too many deaths, the Israeli government is not carrying out a plan intended to wipe out the Palestinians,” Truah’s statement reads. “One can vigorously oppose occupation without resorting to terms such as ‘genocide,’ and without ignoring the human rights violations of terrorist groups such as Hamas.”

Although the Movement for Black Lives platform does not explicitly endorse BDS, it does call on activists to “build invest/divestment campaigns that ends [sic] US Aid to Israel’s military industrial complex and any government with human rights violations.” The platform includes a link to the BDS movement website.

Formed in response to growing outrage over the criminal justice system’s treatment of African Americans — particularly police violence against them — the Movement for Black Lives describes itself on its website as “a collective of more than 50 organizations representing thousands of Black people from across the country.”

UPDATE: An earlier version of this story reported that the MBL platform credits Adalah-The Legal Center for Arab Minority Rights in Israel, as one of its “authors & contributors.” According to spokesperson for the authors of the platform, the inclusion of Adalah was a clerical mistake that has since been corrected in the platform document. The story has been updated to reflect this.