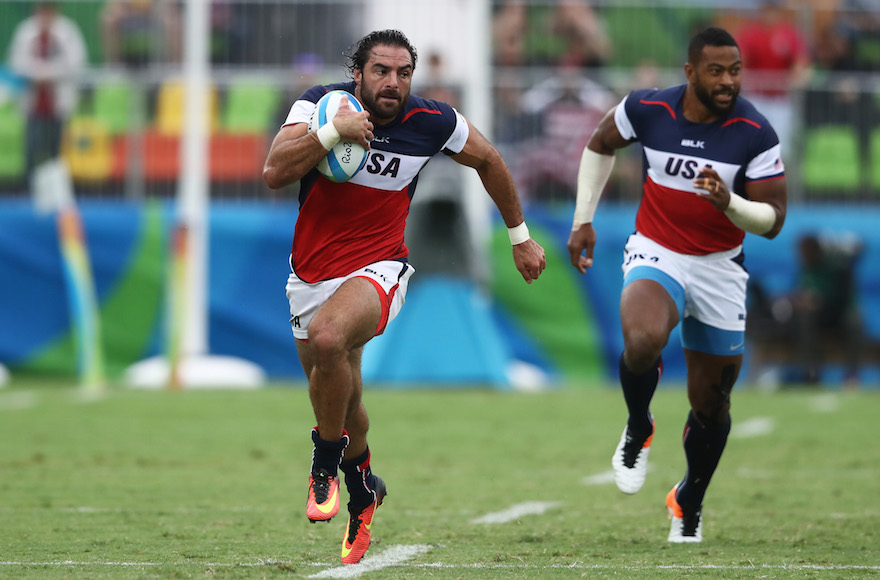 Nate Ebner of the United States on his way to scoring a try during the U.S. team's match against Fiji at Deodoro Stadium in Rio de Janeiro, Aug. 10, 2016. (David Rogers/Getty Images)
Advertisement

(JTA) — Nate Ebner, the Jewish NFL player competing for the U.S. Olympic men’s rugby team, came up short in his bid to help the Olympic squad advance beyond the pool stage in Rio de Janeiro.

With a minute to go in a match against favored Fiji on Wednesday, Ebner ran nearly half the length of the field to score a try — analogous to a touchdown in football — to bring the U.S. within five points of the Fijians. To advance, the Americans needed to win or lose by four points or less.

But teammate Maddison Hughes missed the following conversion kick that would have cut Fiji’s lead to three and the game finished seconds later.

The Americans can finish ninth in Olympic competition with a victory over Spain on Thursday.

Ebner, whose father was the Sunday school principal of Temple Sholom in Springfield, Ohio, is a safety and special teams standout for the NFL’s New England Patriots. Rugby was his first sport, and he joined the U.S. national team at age 17, but he switched to playing football while attending Ohio State University.

He will soon head to training camp to prepare for the football season, but he thought the Olympic tournament was a good advertisement for a sport rarely watched in the United States.

“It’s been awesome. I wouldn’t have done anything differently,” Ebner told The Associated Press. “I can only imagine people who haven’t seen [rugby], it’s got to be exciting to watch.”