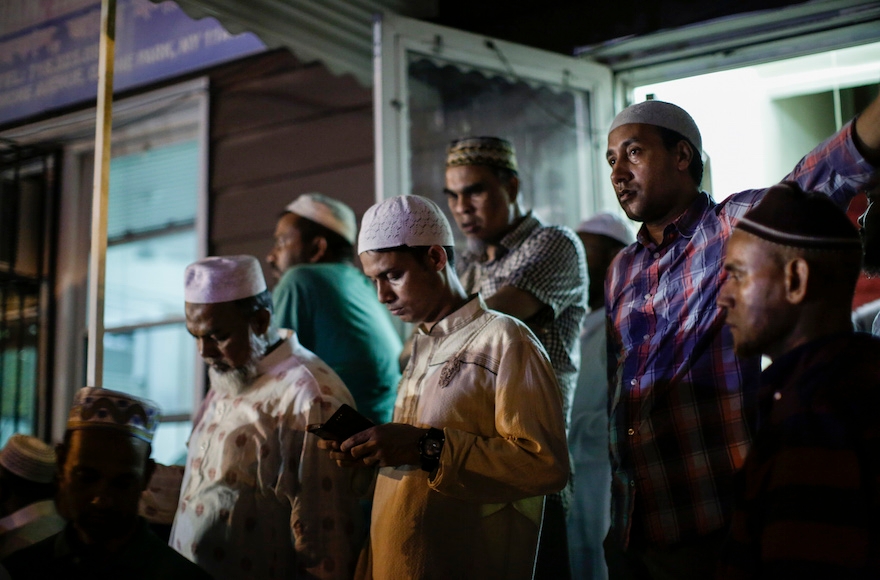 Community members praying outside the Al-Furqan Jame Mosque in Ozone Park, Queens, after after a shooting there, Aug. 13, 2016. (Kena Betancur/AFP/Getty Images)
Advertisement

(JTA) — The Anti-Defamation League expressed its solidarity with New York’s Muslim community in the wake of the murder of an imam and his assistant leaving their mosque.

Imam Maulama Akonjee and his assistant Thara Uddin were wearing traditional Muslim garb when they left their mosque in Queens on Saturday afternoon and were shot from behind at close range. The mosque serves the Bangladeshi community.

“We are shocked and horrified by this unthinkable tragedy and extend our sorrow and solidarity to the families of the victims and the broader Muslim community across New York City,” said Evan Bernstein, New York Regional director. “While the motivation for this crime is still being investigated, nothing can justify the killing of an innocent man walking from his place of worship.”

Bernstein called on the New York Police Department to investigate the murder as a possible bias crime.

An NYPD deputy inspector, Henry Sautner, told The Associated Press: “There’s nothing in the preliminary investigation to indicate that they were targeted because of their faith.”

The New York Daily News reported that the department’s Hate Crimes Task Force would investigate, though it was too early to determine the cause. Robbery may also have been a motive, the newspaper reported, citing an unnamed source in the NYPD, since one of the men was carrying several hundred dollars.

They thought a Jewish school in Oakland would be able to accommodate their gender-fluid child. It wasn’t that simple.

Homeless shelters are dividing Jews on NY’s Upper West Side