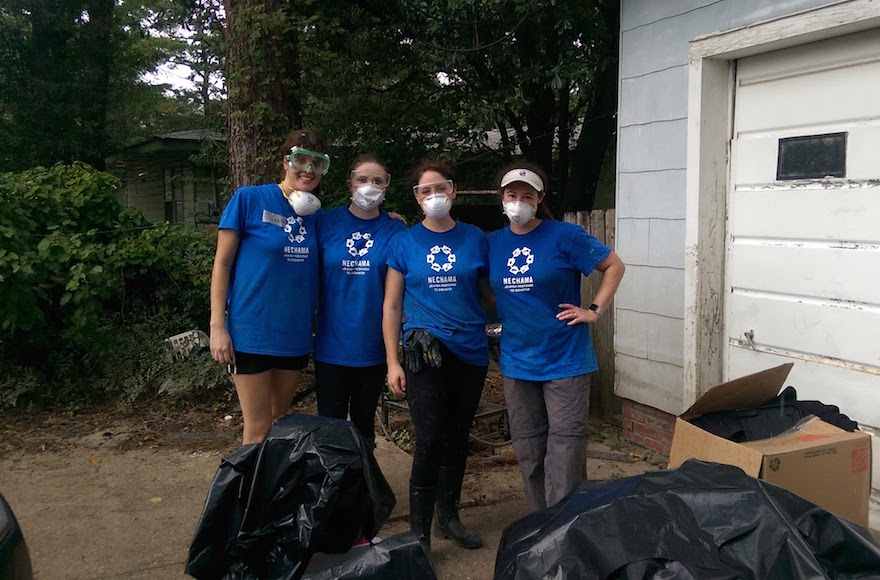 Volunteers from JNOLA, a Jewish young adults' group in New Orleans, volunteers on Saturday, Aug. 20 at a house affected by the recent flooding in Baton Rouge. (Courtesy of the Jewish Federation of Greater New Orleans)
Advertisement

(JTA) — At midnight on Aug. 13, the floodwaters began to flow into Ellen Sager’s Baton Rouge home.

Her husband grabbed some important family documents, then the couple gathered some snacks and headed to a room on the second floor with their two teenage children. Sager assumed the waters would recede and the family could return within several hours.

But after spending the entire next day cooped up in the room, the Sagers had to be evacuated from their block by boat. The water had risen to 4 feet outside the house and to 2 feet on the first floor.

Now their belongings sit in a heap on their front lawn. The house has been gutted — baseboards, floor molding and walls all removed — leaving a shell. With flood insurance, the Sagers have rented furniture and moved into a three-bedroom apartment, where they will live for the next six months.

The high school their son and daughter attend has moved into a church. They and their classmates won’t have lockers and will be limited by space to one notebook each.

“People are paralyzed,” said Sager, executive director of the Jewish Federation of Greater Baton Rouge. “People don’t know what to do. You’re watching your life being hauled away into a dumpster and you need to start all over.” 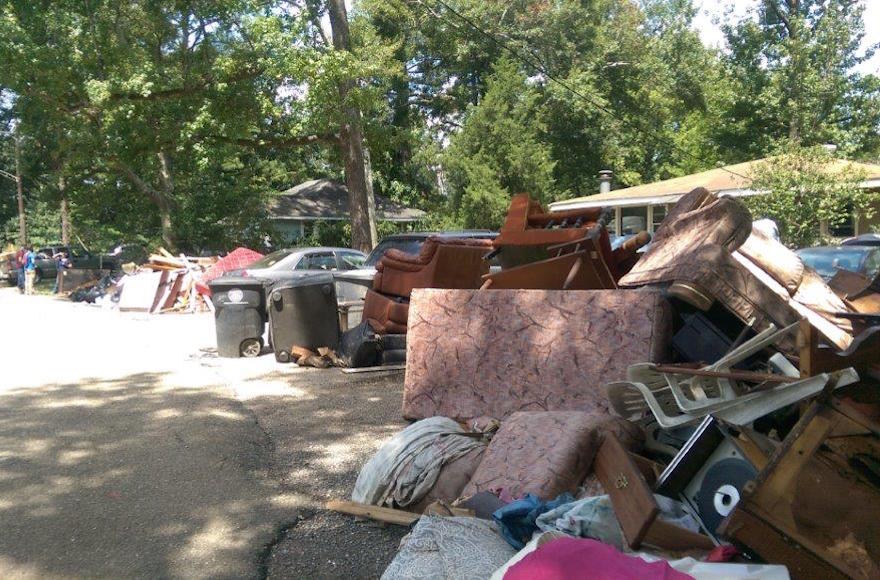 The recent flooding in Baton Rouge may have damaged up to 110,000 homes. More than 100,000 people have applied for disaster relief from FEMA. (Courtesy of the Jewish Federation of Greater New Orleans)

Sager’s was among 34 Jewish families who lost their homes in the flooding that has hit the Baton Rouge area since Aug. 12, when heavy rains led rivers to overflow and fill whole neighborhoods. Thirteen people have died in the floods.

The Baton Rouge Area Chamber, a local business group, has estimated that up to 110,000 homes could be affected by the flooding. The affected areas are home to nearly 300,000 people, and the White House has reported that more than 100,000 have applied for individual assistance from the Federal Emergency Management Agency, or FEMA. On Tuesday, President Barack Obama visited the flood zone.

Local residents have described scenes of destruction in Baton Rouge: roads blocked by mounds of people’s ruined belongings, homeowners searching for help, the remnants of people’s lives being hauled to the trash. Anna Herman, director of the Union for Reform Judaism’s Jacobs Camp in Mississippi, recalled seeing furniture, TVs and fridges on the street.

“You can barely drive down the road because there’s so much stuff,” said Herman, who is filling in for Sager at the Baton Rouge federation. “You saw all these families’ lives on the streets, trashed.”

The city’s small Jewish community, numbering about 1,500, has turned its focus to helping flood victims. The local federation is raising money to help victims and has received an emergency donation of $25,000 from the Jewish Federation of Greater New Orleans.

Meanwhile, the city’s two synagogues and Chabad have worked to help Jewish victims, pairing each affected family with another Jewish “buddy” family that checks in with them daily. Families who have lost their homes have taken up residence with family and friends.

“While we are small, we are a very tight-knit Jewish community,” said Deborah Sternberg, president of the Reform Congregation B’nai Israel. “Everyone knows everyone. We stick together and support each other. It has been very tough for the families that experienced loss. What has been so amazing is how quickly the community has stepped up in Baton Rouge.”

Nechama, a Minnesota-based Jewish disaster relief organization, has mobilized 100 volunteers to work on damaged houses since last week. The group has assessed the damage at 25 houses, and is clearing them out one by one in a process called “muck and gut.”

The volunteers enter houses and clear out any property damaged by the flood. Volunteers described hauling out couches, clothes, dressers and trinkets laden with water. After the property is evacuated, the volunteers strip the house of its drywall, plaster and insulation, down to a dry core that can be rebuilt when the waters fully recede.

“We try to take the house down to the bone so it can be remediated or moved back into or built out,” said Mark McGilvery, a field operations specialist for Nechama. “Another hard thing to do is to keep interest once the news turns the page on whatever the next story is. When volunteers aren’t available, people will be in a real crunch.”

Tana Velen, the NextGen manager at the New Orleans federation, had to clear out individual photos floating on the first floor of a woman’s house while she mucked and gutted last week. Velen brought 15 volunteers from New Orleans on Saturday and hopes to bring more next weekend.

“Every single street is lined with enormous piles of people’s lives they’ve had to discard as trash,” Velen said. “It’s a stark contrast. You come from your home, with everything you have, and see what these people have lost.”