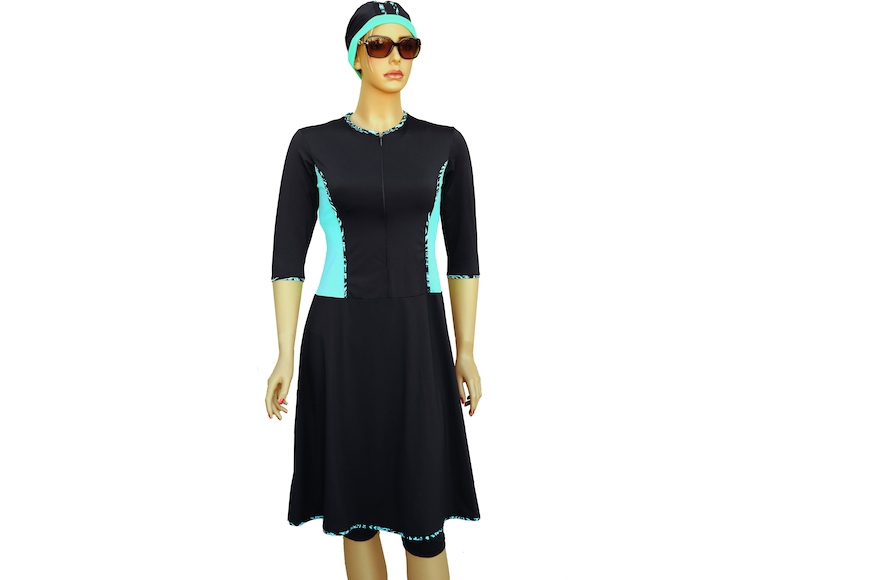 AMSTERDAM (JTA) — According to the latest tally, at least 30 French municipalities have banned the product that the Paris-born businesswoman Yardena G. sells for a living.

Yardena, a haredi Orthodox mother of nine from Jerusalem, owns the Sea Secret fashion label of modest swimwear for devoutly religious women. And she regards the bans on full-body bathing suits for Muslim women, or burkinis, as “the best commercial ever for modest swimwear.”

In fact, Yardena said in an interview Thursday with JTA, she predicts the controversial bans will “end up boosting sales in a big way.” (Citing privacy issues, she asked that her last name not be mentioned in the article.)

Yardena, who immigrated to Israel 14 years ago, sells various models of “full-body” swimsuits that leave little more than the hands and feet exposed.

The bans on the distinctive Muslim swimwear have ignited a polarizing debate in a divided France, which is struggling to balance freedom of worship with its attachment to other liberal values — including the fight against radical Islam and the oppression of women.

Defended by French Prime Minister Manuel Valls as a countermeasure against “a political project … to perpetuate female servitude,” the burkini ban and its enforcement have angered millions of Frenchmen who regard it as a gross infringement into the private realm and unwarranted discrimination toward Muslims.

It also dismayed Yardena, 45, who started her line of modest swimwear with a female business partner “to empower women” who adhere to religious laws, common to Muslims and Jews, that demand women cover up to various degrees.

“It’s like someone turned the world on its head in France,” she said. “Instead of promoting modesty and good measures like leaders and figures of authority ought to, they’re telling women to take it off.

“I don’t understand what’s happened, but I do know that as a person who keeps modest clothing, such measures will do nothing to discourage other women like me.”

Sea Secret’s dozen or so sales agents in France have reported to Yardena that French Jewish women, who constitute the lion’s share of the firm’s clientele, are worried they may be affected by the ban.

“It’s creating a problem for Jewish women because it’s poisoning the atmosphere for everyone – Muslims, Christians and anyone who doesn’t want a police officer making wardrobe decisions for them,” Yardena said.

Some suits in the  Sea Secret line could be classified as a burkini, she said. Yardena noted one model featuring an elastic shawl that can be used both as a hijab and a traditional head cover of the sort favored by haredi and modern Orthodox women.

One of several Jewish-owned businesses offering modest swimwear for women, Sea Secret does have some Muslim clients. But many Muslim women refrain from buying its products because it is known to be Jewish-owned and Israel based.

“They perceive it as political,” Yardena said.

Christian women, however, account for a third of sales.

“I believe women who observe modesty observe the sanctity of God no matter what their own faith happens to be,” Yardena said. “I think our brand is truly a light onto the nations.”

The mainstream representative organs of French Jewry, which are normally quick to offer their take on current affairs — especially on religious issues — have remained conspicuously silent on this issue even as the Board of Deputies of British Jews complained Wednesday about reports of “police harassment” of Muslim swimmers in Nice. It was an unusual move for the board, which rarely comments on foreign issues without consulting the relevant Jewish communities.

A senior rabbi, Moshe Sebbag of the Grand Synagogue of Paris, acknowledged in an interview with JTA on Tuesday the reluctance of other French Jewish leaders to speak out on the issue.

But Sebbag ultimately defended the bans, whose supporters, he said, “understand today there’s a religious war, a takeover of the secular establishment of the French republic, and this is what they find unacceptable.” Asked if he agrees with the burkini bans, he said: “Yes, because you see that going with it [a burkini] is not innocent, it’s sending a message.”

The burkini ban is turning France away from its own core values, according to David Isaac Haziza, a French-Jewish columnist for La Regle du Jeu, the commentary and news site edited by the philosopher Bernard-Henri Levy.

Haziza is critical of those who wear the burkini, which he described as a sign of radicalization at the expense of integration. Nonetheless, Haziza argued against fighting it through legislation and regulations. The fight, he said, should be “on a moral level.”