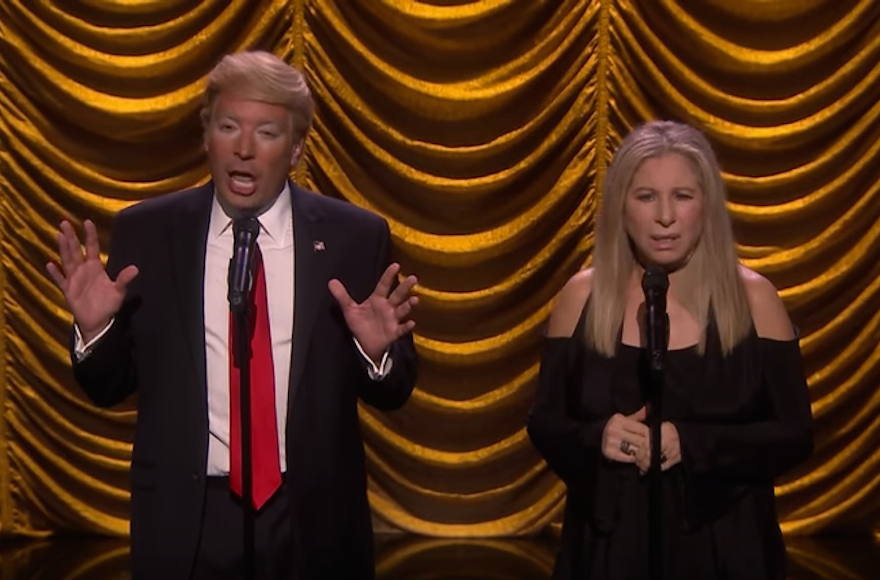 Barbra Streisand and Jimmy Fallon on the "Tonight Show." (Screenshot from YouTube)
Advertisement

Barbra Streisand isn’t a fan of Donald Trump — so why did she sing a duet with him?

Ok, the iconic 74-year-old Jewish singer didn’t perform with the real Donald — she actually sang with Jimmy Fallon, who pulls off a mean Trump impersonation, on “The Tonight Show” Thursday night.

“It’s sort of nice to see you in person,” Streisand said.

The pair went on to sing a comedic rendition of “Anything You Can Do” that skewered many of Trump’s statements from the campaign trail, including his intention of building a wall along the Mexican border.

Streisand is in the middle of a tour in support of her 35th album, “Encore: Movie Partners Sing Broadway.” She mocked Trump repeatedly during the tour’s first concert. She is also an outspoken Hillary Clinton supporter.

The stage and screen legend was also in the news recently for a completely separate reason: Siri, the iPhone robot who can interact with users, had been pronouncing her name wrong (it was saying “StreiZAND” instead of “StreiSAND,” with a soft “s”). Streisand called Apple CEO Tim Cook, who agreed to fix the glitch.