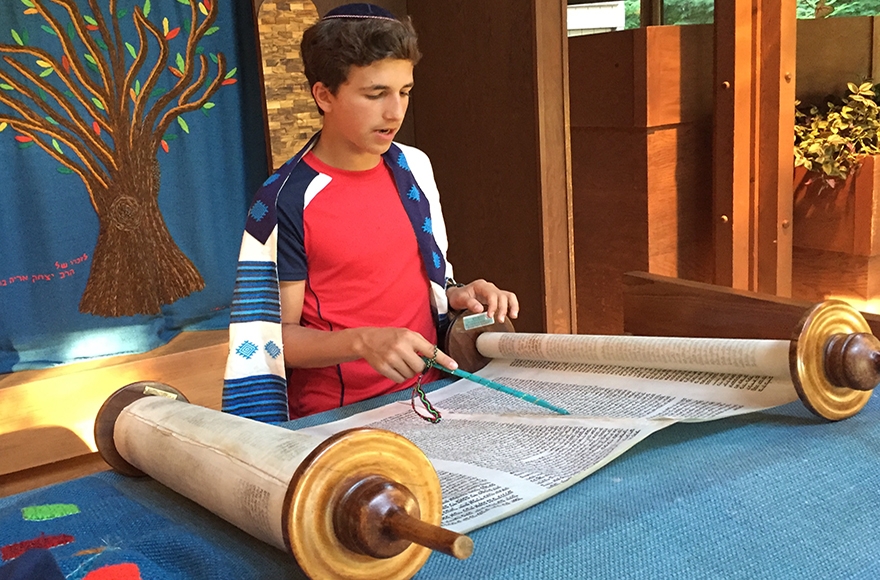 Alex Schapiro studying for his bar mitzvah at the Spanish Synagogue of Prague in 2016. (Courtesy of Andrew H. Schapiro)
Advertisement

PRAGUE (JTA) — The U.S. Ambassador to the Czech Republic, Andrew Schapiro, celebrated his son’s bar mitzvah in the same Prague synagogue that his ancestors attended before the Holocaust.

The service for 13-year-old Alex Schapiro took place on Aug. 20 in the Spanish Synagogue, which was built for a Reform congregation and is now part of the local Jewish museum.

“It’s really cool and meaningful that I had my bar mitzvah at the same place my grandma – and my great-uncle, who was at my service – went for the holidays. I am really glad I could have it there, and I think my grandma would be too,” Alex Schapiro said.

His father noted another symbolism that resonated with him.

“To be back here not just as a Jewish family but also in this role of representing the United States, the country that gave my mother refuge and saved her life, surrounded by many members of both of our families, that was unforgettable,” the elder Schapiro told JTA.

The diplomat’s Prague-born mother, Raya Czerner Schapiro, was 5 when the Nazis occupied Prague. Her parents sent her and her sister to the United States in October 1939. She died in 2007, but her brother attended his grand-nephew’s bar mitzvah.

Tamar Newberger, Alex’s mother, and his father brought Rabbi Asher Lopatin from the United States to officiate at the ceremony. The couple also had to arrange for a Torah scroll to be used in the service, as the one on hand was too aged and damaged to be considered fit according to religious laws.

More than 200 guests attended Alex Schapiro’s bar mitzvah ceremony, including some 150 who made the trip from the United States. The party – a non-themed one, his parents said – took place in the ambassador’s residence.

“This moment didn’t make me feel like an adult; I have started feeling more adult since I moved to Prague,” Alex Schapiro said.