Why Tel Aviv is so crazy about dogs 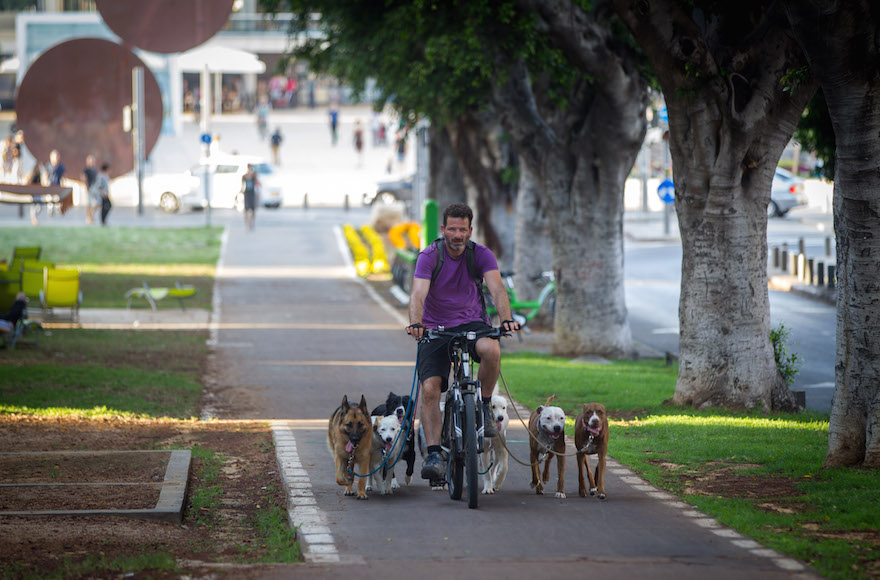 TEL AVIV (JTA) — It’s not every day you see a dog getting a massage. But in this Israeli city, somehow it seems expected.

A yellow Labrador sprawled out on the massage table, one leg cycling slowly in the air. Nearby, a pair of well-kept poodles snacked on maki tuna rolls and posed for professional photos. Leashed shoppers sampled organic gluten-free kibble, tried on boutique collars and leashes and eyed bespoke dog tags and local dog-themed art.

Meanwhile, the dogs’ owners mingled and forked over the necessary shekels, seemingly unfazed by their reduced role in the whole affair. After all, Tel Aviv is a dog city. The reasons for that are both global and local.

“Everywhere in the world is fighting for the creative class, and one of the ways to do that is to make life better for those people in the city,” Mira Marcus, Tel Aviv’s international press director, told JTA. “I think many creative people are dog owners. Many times, when I walk into a startup company in Tel Aviv, there are dogs everywhere. It’s very, very common for people to bring their dogs to work here.

The city estimated it is home to 30,000 dogs, along with 413,000 people. Ahead of its dog festival, called Kelaviv (a portmanteau of “kelev,” Hebrew for “dog,” and Tel Aviv), Tel Aviv declared itself the friendliest world city for dogs, with the most dogs per capita.

(New York City put the number of dogs in town at 600,000, with a population of 8.6 million humans, about the same ratio as in Tel Aviv — but who’s counting?)

What makes Tel Aviv unique is less numbers than attitude. Dogs crowd the streets of Tel Aviv, encouraged by its year-round sunshine and walkability. They’re allowed in most cafes, stores and even high-end restaurants, as well as on city buses and trains and in taxi vans. Tel Aviv boasts 70 dog parks and four dog beaches. The regular parks and legally dog-free beaches have their fair share of dogs, too, many of them off-leash regardless of regulations. 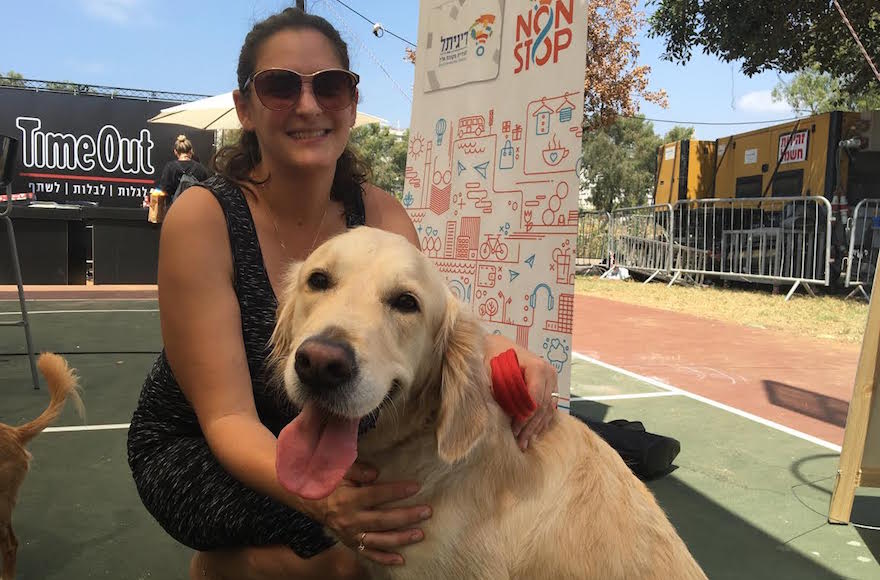 Mira Marcus, the city of Tel Aviv’s director of international press, with her dog Cali at the Kelaviv dog festival in Tel Aviv, Aug. 26, 2016. (Andrew Tobin)

True, most of Israel’s dogs — some 400,000 of which are registered — don’t live in Tel Aviv. But like elsewhere in the world, an increasing number of Israelis are migrating to the city, and many of them want dogs. The number of dogs in Tel Aviv has more than tripled since 1996, according to the city.

Israeli experts on human-dog relations said the animals play the role of children in the lives of urban millennials, who are waiting longer than ever to marry. For Israelis, whose national culture has roots in the ethos of the kibbutz, dogs may also help ease the isolation of urban life, they said.

“We still have a very strong memory of our collectivist past, and dogs help us cope with the loneliness of the postmodern present,” Orit Hirsch-Matsioulas, a doctoral student in anthropology at Ben-Gurion University of the Negev, told JTA. “We opened the apartment door to dogs and made them part of the family. People understand their dogs as their own children.”

Florencia Aventuriny, a 27-year-old media manager, and Hod Kashtan, a 31-year old software engineer, each had a dog in tow at Kelaviv. In the month the two Tel Avivians have been dating, their dogs, Sandy and Chuni, have been part of the relationship.

“I grew up with a dog outside Tel Aviv, and it was nice, but not the same,” Aventuriny said. “In Tel Aviv you take your dog everywhere, and he’s part of your community.”

Perhaps more than other urbanites, Tel Avivians demand that their dogs be accommodated. Businesses know barring dogs means losing business and that they would likely hear about it on Facebook. It helps that Tel Aviv is an informal city, in an informal country, where T-shirts and sandals are appropriate attire at most restaurants, not to mention weddings. Even Hotel Montefiore, a premier local restaurant and hotel, welcomes dogs.

Many businesses leave out bowls of water for thirsty dogs. Some go further. Asaf Gorelik, 34, was at Kelaviv with his girlfriend, Dana Galant, and his two adopted dogs, Nelly and Rahat. Gorelik owns a trendy Tel Aviv barber shop chain called Barberia, where next month he will be selling posters of rescued pit bulls sitting in his retro barber chairs to raise money for a charity that rehabilitates the animals.

“I love dogs, and I always wanted to help,” Gorelik told JTA. “Dogs are an accepted part of Tel Aviv. When I leave the city, people are like, ‘What are you doing bringing dogs in here?'”

More and more Tel Aviv-based businesses exist specifically to serve dogs. You can’t walk more than a few blocks in the city without coming across a pet store. Many such businesses were at Kelaviv, including high-tech startups like DogMen, a fast-growing dog walking service that sends owners photographs of their dogs on Whatsapp, and Dogiz, an app that helps owners find dog services in their neighborhood and lets them track walks in real time. 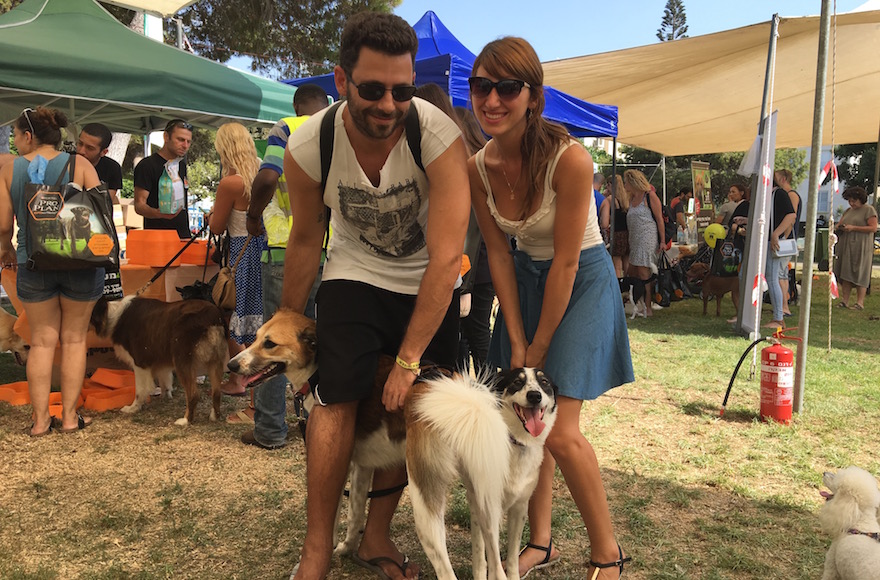 Hod Kashtan, left, with his dog Chuni, and Florencia Aventuriny with her dog Sandy at the Kelaviv dog festival in Tel Aviv, Aug. 26, 2016. (Andrew Tobin)

“The market is growing along with the urban population,” Dogiz CEO Alon Zlatkin told JTA, noting there are now six dog walking and dog day care companies in the city. “Our research shows millennials in Tel Aviv, as in Europe, are more focused on their careers. Their dogs are like their kids, and they need a solution while they’re working long hours.”

The city of Tel Aviv must answer to dog owners, too. Though there is more than one dog park every square kilometer, according to the city, some Tel Aviv residents complained that they had to walk up to 15 minutes to reach one and they would like more greenery for their pooches to play in. Others bemoaned the dog droppings on the streets. Dog issues have even become part of political campaigns in municipal elections.

Kelaviv was the brainchild of Tal Hollander, a Tel Aviv resident who was in Yehoshua Park with his dog when he was struck with inspiration. He contacted the city, which helped him plan the event over several months.

“Many people had doubts about this,” Hollander told JTA. “How will the dogs behave? That was the biggest question. But I had faith in the dogs, and I was lucky to find a nice girl at the city who wanted to help.”

In 2017, the city plans to launch a service called DigiDog to give pet owners in Tel Aviv personalized updates on pet-friendly events and services, as well as deals from local pet companies. The service will be based on the city’s award-winning Digitel service for human residents.

“It can be a new dog park that’s opening in your area. It can be a reminder for your annual rabies shot that’s mandatory in Israel. It can be a discount on dog food in a dog store in your area that’s participating in the program,” Marcus said.

Dogs also have cultural cache in Tel Aviv. Rescuing them from shelters is a full-blown trend. Several shelters were represented at Kelaviv. And at least two set up shop on the streets of the city every weekend, lining up dogs to be adopted or fostered, or to recruit donations and volunteers. In the Florentine neighborhood in south Tel Aviv, which many call the city’s hippest enclave, the city estimated every third person has a dog.

The rescue-dog craze can be seen as part of the larger animal rights movement centered in Tel Aviv. Vegan activism, which in Israel tends to highlight cruelty to animals, is common on the streets of the city and on social media. Activists estimate 4 percent of Israelis are vegans, a higher ratio than in any other country, and new vegan and vegan-friendly restaurants pop up in Tel Aviv all the time.

“People think we can’t really do anything about all the horrible things that are going on around us, some of which we’re partly responsible for. Even if we become activists, helping Palestinians or whatever, it would be hard to make a change” in the political situation, Dafna Shir-Vertesh, an anthropologist who studies human-animal relations at Ben-Gurion University, told JTA. “But maybe [animal rights] is our way of making a change in the world.”

By flaunting their dog friendliness, secular Tel Avivians also distinguish themselves from Israel’s poorest communities, Arabs and haredi Orthodox Jews, for whom dog ownership is rare. That’s partly because there are traditional taboos about dogs in both Judaism and Islam, according to Shir-Vertesh.

But don’t tell that to Agriculture Minister Uri Ariel, a member of the religious Zionist Jewish Home political party’s more religious faction, Tkuma. Along a doggy red carpet at Kelaviv where mutts and purebreds could strut their stuff, he was among the politicians who appeared on a series of posters promoting animal adoption.