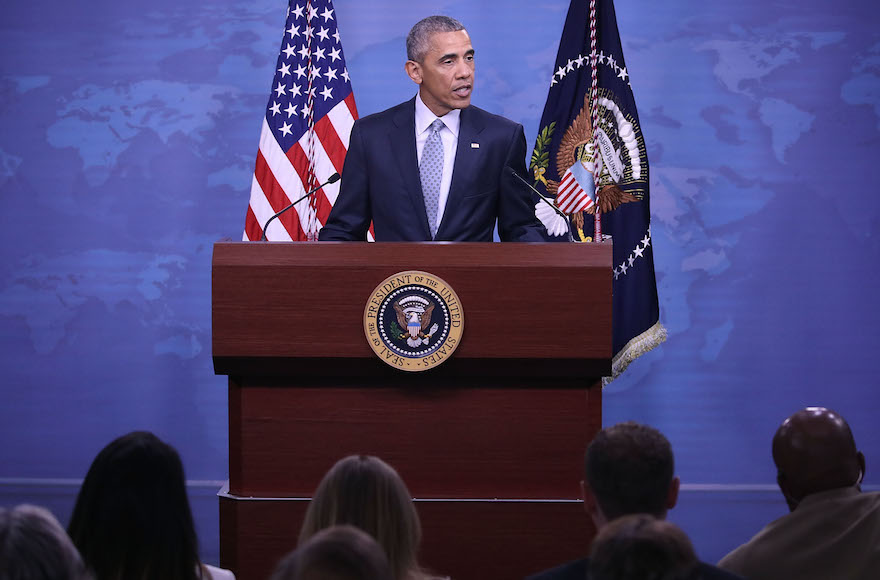 Barack Obama speaking to the media after a meeting with US Secretary of Defense Ashton Carter and members of the Joint Chiefs of Staff, at the Pentagon in Arlington, Virginia, Aug. 4, 2016. (Mark Wilson/Getty Images)
Advertisement

WASHINGTON (JTA) — The Obama administration expressed “concern” over the deployment of powerful anti-aircraft missiles near an Iranian enrichment facility ostensibly shuttered under the Iran nuclear deal, but said it did not violate embargoes.

Iran over the weekend announced the deployment of the Russian-made S-300 missiles around the Fordow facility.

“We’re concerned about the provision of sale to Iran of sophisticated defense capabilities such as this S-300,” John Kirby, the State Department spokesman, said on Monday.

“As we get more information, obviously, we’re going to stay in close consultation with partners going forward,” he said. Russia, like the United States, is one of the six major powers that negotiated the sanctions relief for nuclear rollback deal reached last year.

“The arms embargo that had been in place under the previous regime would not have been applied to the S-300 system because it’s a defensive system,” Rhodes said. “That doesn’t mean we don’t have concerns with any increased Iranian military capability, and we’ve expressed those concerns.”

Sen. Mark Kirk, R-Ill., an architect of the sanctions regime, said in a statement he believed Russia may be subject to sanctions because of the sale. “The Administration is failing to enforce U.S. laws that mandate sanctions against countries that export destabilizing advanced conventional weapons to Iran,” he said.

President Barack Obama in 2009 exposed Fordow as a bunker-style underground uranium enrichment facility and used its existence, kept secret for years by Iran, to persuade an alliance of nations to sanction Iran.

The sanctions brought Iran to the negotiating table, and once the deal was reached last year, Russia lifted a ban on the sale of the S-300s to Iran in place since 2010, when Israel and the United States prevailed on Russia not to make the sale.

Iranian regime statements said the deployment of the missiles was “defensive.” Iran maintains civilian uranium enrichment capabilities, but has shut down military-level enrichment.

Rhodes said that United Nations nuclear inspectors continue to monitor Fordow, and that Iran has kept its part of the deal, saying enrichment has stopped and centrifuges “have been, in many cases, removed and put under monitoring and storage.”