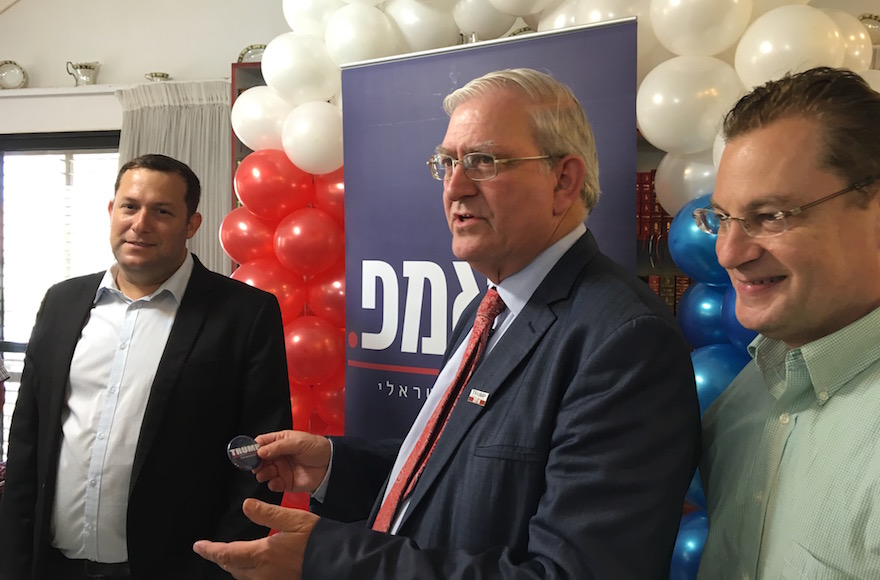 KARNEI SHOMRON, West Bank (JTA) — Israeli-American backers of Donald Trump opened a campaign office at this Jewish settlement Monday, although they disagreed about the significance of the location.

Republicans Overseas Israel’s chief strategist, Tzvika Brot, said the launch of ground operations at a settlement in the West Bank was not a specific show of support for the settlement movement. But Mark Zell, the group’s co-chairman and vice president of the parent Republican Overseas, quickly contradicted him to reporters at the opening of the office.

“That’s not entirely true,” Zell said, standing before a Hebrew-language Trump banner and red, white and blue balloons. “[The Republican Party platform] eliminated any reference to Israel as an occupier. That wasn’t just a play on words, that was a real statement that coincides with Donald Trump’s own statements recently that when it comes to building homes and synagogues and schools for Arabs and Jews in Judea and Samaria, this is an issue for the Israeli government to decide and the Israeli people to decide. It is not something that America should be dictating to Israel.”

In the GOP platform passed this summer, party leaders “reject the false notion that Israel is an occupier” of the territories that include Judea and Samaria, as the area was known since biblical times. The platform pointedly omits references to the two-state solution, and opposes “any measures intended to impose an agreement or to dictate borders or other terms.”

Significant or not, the location underscored what organizers felt was the kind of Israeli-American voter who favored Trump. Although voting data is skimpy, the settlements tend to be over-represented by Orthodox Jews with dual Israeli-American citizenship who in recent years have tended to vote Republican in presidential elections.

The Republican group’s strategy is to target young Americans in Israel who do not usually vote and especially immigrants from pivotal swing states such as Florida, Ohio and Pennsylvania. Brot estimated that there are some 30,000 eligible swing state voters in Israel, including 10,000 to 12,000 from Florida alone. Republicans Overseas Israel thinks that could be enough to tip the election in Trump’s favor.

“There certainly are plenty of people who move to Israel from New York. But there are also plenty who come from Florida and from Pennsylvania and from Ohio,” Republican Overseas Israel counsel Abe Katzman told the reporters. “In fact, you talk about a 500-vote margin in [Florida, whose disputed tally decided the presidential election of] 2000. Well, last election there were over 7,000 votes from Florida [in Israel]. There were thousands more from Ohio. There were thousands more from Pennsylvania. So the answer is yes, in a close election we really can make a difference.”

“I as the head of the Shomron Regional Council and my students suffer greatly as a result of international pressure directed by the Obama administration that prevents us from building neighborhoods, schools and kindergartens and clearly harms our security,” Dagan said. “We as Israeli citizens cannot interfere in American politics, but I can call on every American citizen who wishes to strengthen the U.S. to register and vote.”

Efrat Rosenblatt, a member of the council of the Elkana settlement and the vice president of the Israel Bar Association, was on hand, too, and is assisting the campaign.

Brot, a former political journalist for the popular Israeli daily Yedioth Ahronoth, said right-wing Knesset members, including Temple Mount activist Yehuda Glick, had wanted to attend the opening. But he said Prime Minister Benjamin Netanyahu, the head of Glick’s Likud party, and Defense Minister Avigdor Liberman, the head of the Yisrael Beiteinu party, had nixed the idea in an effort to stay out of American politics.

Neither Yisrael Beiteinu nor Likud were immediately available for comment.

Republicans Overseas Israel, the main Republican group in the country, is not affiliated with or funded by the GOP but works with the party and the Trump campaign in the United States. Zell, who took part in the process that drafted the new pro-Israel Republican Party platform, spoke of daily coordination with the campaign and discussion with Trump’s Israel advisers, who include his Jewish real estate lawyers.

At the Karnei Shomron office in the northwestern West Bank, the group had set up laptops on a kitchen table strewn with Trump paraphernalia in the home of a local rabbi with New York roots. Every week, the office is to move to a home in a different West Bank settlement.

In the month since Republicans Overseas Israel launched its campaign, it has set up five offices. The others are in Jerusalem, Tel Aviv, Raanana and Modiin. Next up are Bet Shemesh, Holon and the Gush Etzion region of the West Bank south of Jerusalem. Two more settlements, Efrat and Beitar Ilit, which like Karnei Shomron have large American populations, are also to get offices  — or at least presences in supporters’ homes.

Republicans Overseas Israel claims to have invested unprecedented resources in campaigning for Trump. In August, it assembled a team of hotshot Israeli strategists. Some 70-80 volunteers and 20 regional coordinators have since signed on, according to Brot.

Republican Overseas Israel aims to see 200,000 Americans vote in Israel this year — two-thirds of those it said are eligible to cast ballots. That would be more than twice the number of estimated Israeli-American voters in the last presidential election, in 2012, which was itself a record-setting year.

The group said there are at least 75,000 eligible American voters living in the West Bank, along with 225,000 in Israel. Most estimates of the number of American voters in Israel are lower, however. Sara Yael Hirschhorn, a lecturer in Israel studies at Oxford University, last year estimated there were 60,000 American Jews in West Bank settlements, including children.

Republican Overseas Israel predicted 85 percent of voters would cast absentee ballots for Trump — as they did for the Republican candidate in 2012, former Massachusetts Gov. Mitt Romney, according to an exit poll conducted by another right-leaning get-out-the-vote group, iVote Israel. The first step, Republicans Overseas Israel said, is registering voters in the next six weeks, before deadlines pass. 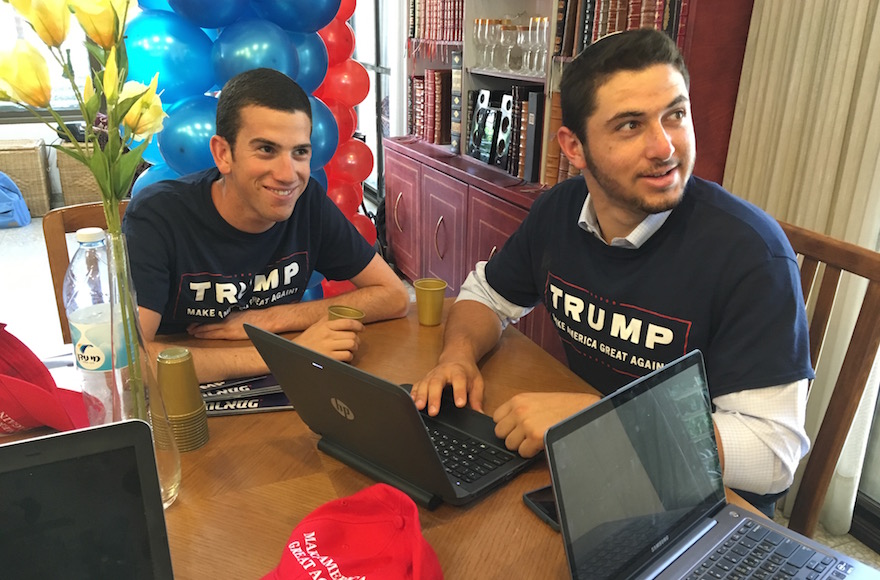 Chaim Rosenfield, left, and another volunteer for Republicans Overseas Israel working at the opening of the Karnei Shomron office in the West Bank, Sept. 5, 2016. (Andrew Tobin)

Zell is the former law partner of Douglas Feith, who served as undersecretary of defense for policy under President George W. Bush and devised strategy for the invasions of Iraq and Afghanistan. A latecomer to the Trump cause, Zell said he had never seen so much excitement among Israelis for a U.S. presidential candidate. Public registration events throughout Israel regularly run out of Trump stickers, T-shirts and pins, he said.

“Wherever I go in this country, it’s quite amazing, both Israelis and Israeli Americans are coming up to me in huge numbers … and say “kol hakavod” — you’re doing a good job — and keep it up, keep up that work. That’s really encouraging for us, and we expect that that’s going to be reflected in the results after everybody casts their ballots here in advance of the Nov. 8 election,” Zell said.

Some, including Democrats Abroad Israel, the party’s official body in the country, have questioned the notion that Americans in Israel are in a tizzy over Trump. An Israel Democracy Institute poll in March found that most Israelis preferred his rival, Democratic nominee Hillary Clinton, 38 percent to 28 percent. There is no recent data specifically on how Americans in Israel are likely to vote.

Merrill Oates, the Democrats Abroad vice chair for Asia, the Middle East and Africa, told JTA in August that most American Israelis actually favor the former secretary of state and U.S. senator over the billionaire developer and reality TV star. A month ago, the Democrats did not have local leadership in Israel, with Oates saying the group “fell behind” in organizing. He did not respond Monday to a request for an update.

“People are very much concerned about Trump’s rhetoric and his reputation,” he said at the time. “They may have some disagreements policy-wise with Secretary Clinton, but they feel she is a reliable person who they can have confidence will steer the ship of state with a steady hand.”

Trump’s disparaging remarks about Muslims and Mexicans, among other controversial statements he has made on the campaign trail, have been criticized by American Jewish groups among others. Trump has also been taken to task for not doing enough to distance himself from white supremacists, including former Ku Klux Klan leader David Duke, and for retweeting their posts.

Republicans Overseas Israel leaders told reporters Monday that Trump had been clear on the matter, and that Clinton could just as easily be blamed for anti-Israel remarks from the left.

At least in the West Bank, the overwhelming number of Americans seem to be backing Trump.

Rabbi Chaim Spring, 79, who agreed to let Republicans Overseas Israel use his home as its Karnei Shomron office (and drape it with Trump banners) described himself as a “big Trump supporter” who watches “a lot of Fox News.”

A New York native and retired U.S. Army chaplain, Spring moved to the West Bank 43 years ago and now works in book restoration and binding. He said the United States could not survive a continuation of President Barack Obama’s policies, which he said were making the country “a second-rate power” feared only by Israel.

“Trump is a generous, down-to-earth person. That he has such wonderful children speaks a lot about him. His daughter [Ivanka Trump] is Jewish, and not only that, she’s Orthodox,” he told JTA.

“You don’t have to be the smartest guy in the world to be president. You just have to be an honest person. And Hillary Clinton is not honest. That’s it.”

Chaim Rosenfield, 19, was one of two young volunteers at the opening of the Karnei Shomron office wearing Donald Trump campaign T-shirts. He immigrated to Israel from the Queens borough of New York City with his family as a child and now lives in the settlement Talmon, where he is waiting to be drafted into the Israeli army. He said most of his friends in Israel, American or not, were Trump supporters, but few were informed about voting.

“Most of them either don’t think they can [vote] or they don’t know it’s pretty simple. That’s my job,” Rosenfield told JTA. “It’s really so important having a strong America and a strong Israel. It really affects both sides.”

In the two months before Election Day, Zell said he hoped to bring Trump or a high-level figure from his campaign to Israel. But he acknowledged it was a big ask, even “as important an ally as [Israel] is to the United States.”

Democrats scramble for a unique message that appeals to Jewish millennials