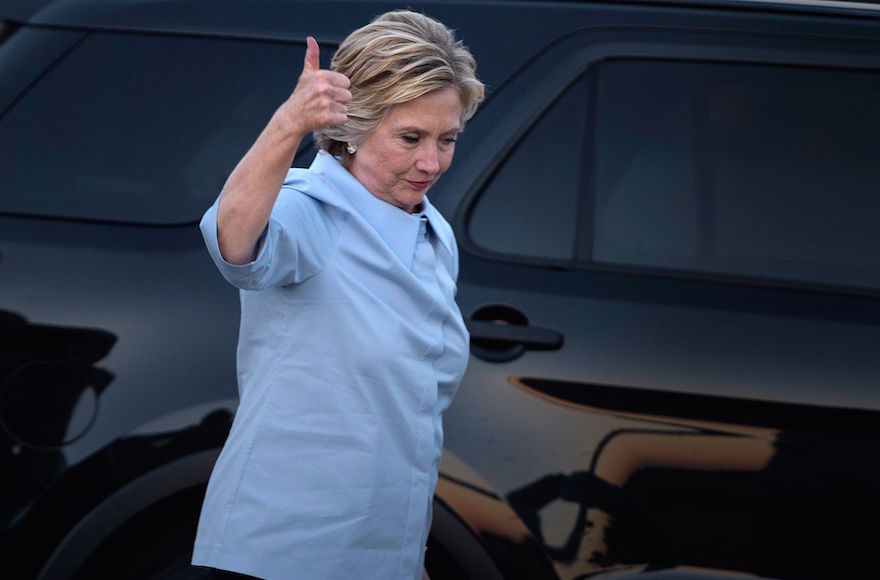 JERUSALEM (JTA) — Most Israeli Jews would prefer Hillary Clinton over Donald Trump as the next president of the United States — even though more of them think Trump would be better for the “Israeli government’s policy.”

According to a poll released Wednesday, 43 percent of Israeli Jews prefer Clinton as president, compared to 34 percent who want Trump, when asked to choose between the two candidates. But 38 percent say Trump would be better for Israel, compared to 33 percent who say Clinton would be.

On both questions, a large number of people don’t pick a candidate.

The Israel Democracy Institute think tank and Tel Aviv University released its latest Peace Index monthly survey after polling 600 Israelis at the end of August. The margin of error is 4.1 percent.

Some respondents support Clinton, the former first lady and secretary of state, even though they don’t think the Democratic candidate “will be better from the standpoint of the Israeli government’s policy,” as the survey puts it. Thirteen percent of the Jews who say Trump, the Republican nominee, would be better for Israel want Clinton to be president. Only 2 percent of Jews who said Clinton would be better for Israel want Trump to be president.

“There seem to be people who support Clinton even though they think she will put more pressure on Israel or be less easy for Israel to deal with in terms of all the support we need from the United States,” Chanan Cohen, a researcher at the Israel Democracy Institute who helped lead the survey, told JTA.

Libertarian candidate Gary Johnson and the Green Party’s Jill Stein were not included in the survey .

In April, Jewish opinion on the subject was nearly reversed. The Peace Index that month found 40 percent thought Clinton would be better for Israel’s interest and 31 percent thought Trump would be.

Since the primary season, when Trump pledged to be a “neutral” broker of Israeli-Palestinian peace, he and the Republican Party have tried to boost their pro-Israel bona fides. On Monday, Republican Trump supporters opened their fifth campaign office in Israel, the first in the West Bank. They predict 85 percent of Americans living in Israel, who they say number 300,000, will vote for the developer and reality TV star.

“I expected the right-wing voters to support Trump in bigger numbers, but we can see less than half did,” said Cohen. “I know that in the United States, the right has concerns about Trump’s personality, and we can see this also on the Israel right.”

Among Israeli Arabs, who make up about 20 percent of Israel’s population, 58 percent prefer the Democratic nominee and 11 percent the Republican.

The poll also probed other issues. Asked about Elor Azaria, the Israeli soldier who is standing trial in a military court for shooting dead a downed Palestinian terrorist in Hebron, most Jewish Israelis “justify” what he did (42 percent strongly and 23 percent moderately). Just a quarter of Israelis “do not justify” the shooting (14 percent strongly and 11 percent moderately).

Jewish Israelis are almost evenly divided on executing captured Palestinian terrorists. Forty-seven percent lean toward killing such a terrorist on the spot, “even if he has been captured and clearly does not pose a threat.” Forty-five percent say he should be handed over to legal authorities.

Support for killing terrorists is highest among right-wingers (62 percent), young people (69 percent ages 18-24) and observant Jews (63 percent of haredi Orthodox and 72 percent of religious or traditional Jews). In April, the Peace Index found that 67 percent of Israelis agreed with the Sephardi chief rabbi’s assertion weeks earlier, which he later took back, that it is a religious imperative to kill Palestinian terrorists.

“We phrased the question differently this time, so you can’t say support has gone down,” Cohen said. “It’s more or less the same I think. It is a really high amount actually to be supporting an illegal action that every soldier is taught is against the army’s rules.”

Though many Israelis disagree with the army’s prosecution of Azaria, the Israel Defense Forces remains by far the most trusted official body in the country. Eighty-seven percent of Israeli Jews put “a lot” or “quite a lot” of trust in the army. Forty-seven percent of Israeli Arabs feel the same way. But Arabs put the most trust in the Supreme Court (64 percent “a lot” or “quite a lot”) — even more than Jews (54 percent).

Amid the controversy over dozens of French towns banning Muslim women from wearing the burkini, a full-body swimsuit, 62 percent of Israelis are against regulating what people wear in public, “including in the case of traditional and conservative clothing,” the survey found. Just 26 percent support the French bans.

Support for freedom of attire is consistent across the Jewish political spectrum — left (73 percent), right (59 percent) and center (61 percent) — and among Arabs (71 percent).

In honor of the start of the school year on Sept. 1, the survey asked Israelis to grade the education system, and both Jews and Arabs gave it a failing grade. Jews gave the system a 5.5 and Arabs a 5.9 out of 10.

In another poll released Wednesday, a CNN/ORC survey of likely American voters showed Trump with a 45-43 percent advantage over Clinton.