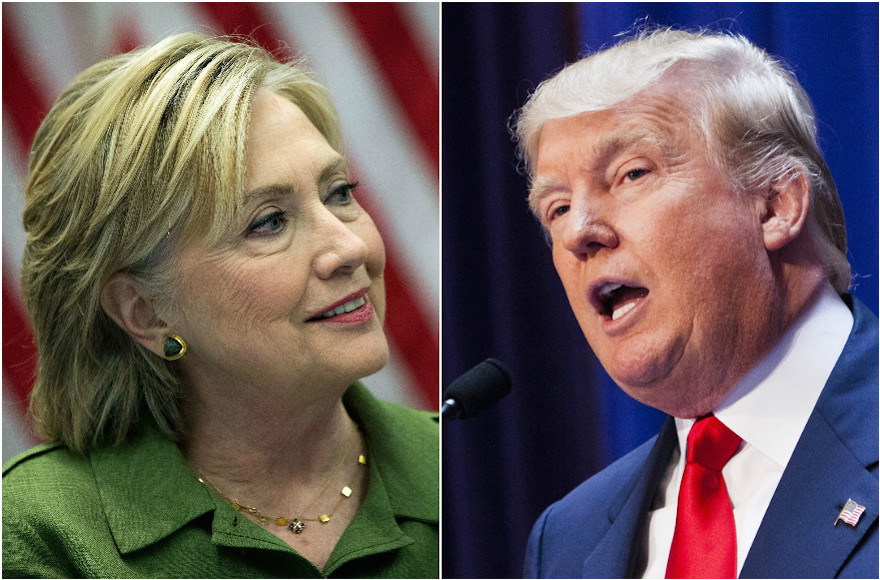 WASHINGTON (JTA) — Hillary Clinton trounces Donald Trump among Jewish voters, but underperforms compared to her Democratic predecessors, according to an American Jewish Committee poll that depicts a Jewish community disenchanted with politics and anxious about the country’s future.

The poll released Tuesday shows Clinton defeating Trump, 61 percent to 19 percent among Jewish voters. She beats Trump on a range of issues, notably national security, an area where the Republican nominee hopes to hammer his Democratic rival.

Trump is also underperforming significantly compared to his recent Republican predecessors in recent elections, including Mitt Romney (30 percent in 2012), John McCain (22 percent in 2008) and George W. Bush (24 percent in 2004).

Trump, whose daughter Ivanka and son-in-law Jared are Jewish, and who has several top Jewish advisers, has nonetheless alienated much of the Republicans’ traditional Jewish support, in part because of his broadsides against minorities, but also because of an insular foreign policy. He has flirted with notions of neutrality in the Israeli-Palestinian conflict and of making Israel pay for the defense assistance it receives from the United States.

A substantial chunk – 17 percent — of the AJC poll’s 1,002 respondents do not back either candidate, with 6 percent opting for Gary Johnson of the Libertarian Party, 3 percent backing Jill Stein of the Green Party and 8 percent saying they will not vote.

Ken Bandler, an AJC spokesman, said the option to declare that one did not intend to vote was included because of widespread disaffection in this election. AJC polls previously did not include the option.

Counting only those who plan to vote, Clinton’s share rises to 66 percent and Trump’s to 21.

The two candidates are among the most unpopular in U.S. history in general polling, where Clinton leads but with considerably smaller margins than among Jewish voters. The most recent national polling puts the Democrat ahead of her Republican rival by about 5 percentage points.

Pessimism and exasperation with politics seem to undergird the polling. More respondents, 39 percent, say American children will be worse off than their parents than those who say they will be better off, 29 percent. Those who say they would be the same are at 27 percent.

Jobs and the economy, as it has in past such surveys, remained among the top issues for voters: 29 percent said it was the most important and 22 percent placed it second. Next was terrorism and national security: 16 percent of respondents had it as the top issue and 15 percent as the second most important.

The AJC did not poll specifically on Israel as a priority, but it was a rare high note among those polled, with 73 percent saying U.S.-Israel relations were fairly good or very good compared to 25 percent saying they were fairly poor or very poor. Asked to respond to the sentiment “Caring about Israel is a very important part of my being a Jew,” 73 percent agreed strongly or somewhat, while 26 percent disagreed strongly or somewhat. Asked whether an independent Palestine could exist peacefully alongside Israel, 49 percent said yes and 20 percent said no.

The poll, which was carried out Aug. 8-28 in phone interviews by the research company SSRS, has a margin of error of 3.57 percentage points.