Lacking status in Israel, Jews in Uganda see new synagogue as ‘our Jerusalem’ 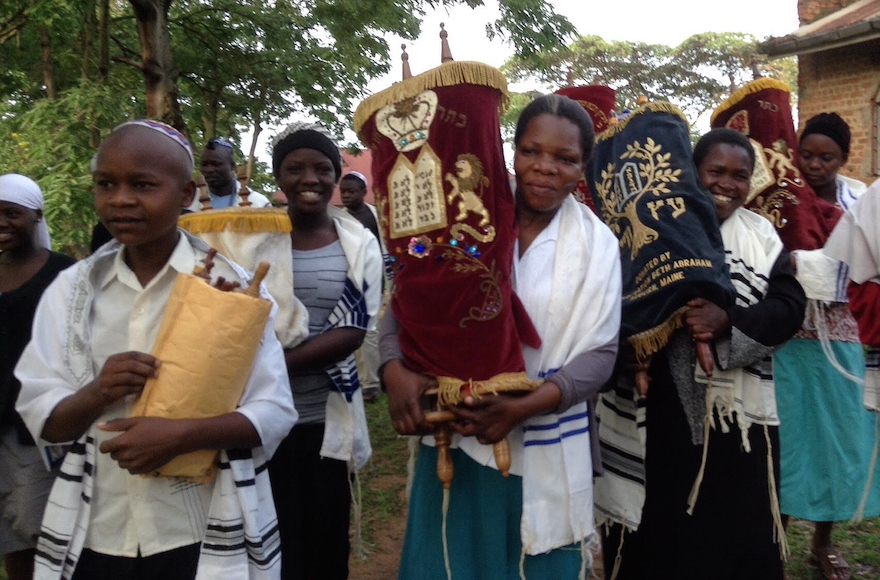 (JTA) — When there was no more space in the synagogue in Nabagoye, Uganda, congregants would go outside, gathering under trees. But the branches weren’t enough to shield them from the rain during the East African country’s wet seasons, which last about half the year.

A new 7,000-square-foot synagogue center set to open Friday will solve that problem — yet there is also something larger at stake.

For the Jews of Uganda, most of whom converted under Conservative rabbis and thus are not recognized as Jewish by Israel’s Orthodox Chief Rabbinate, the community center serves as a way to cement their presence in the country.

“This is a place that gathers our people together — it is our Jerusalem,” the community’s leader, Rabbi Gershom Sizomu, told JTA from Kampala, where he serves as a member of the country’s parliament during the week.

Even though many Ugandan Jews struggle with poverty and The Jewish Agency recently recognized the community as Jewish, making immigration to Israel a possibility under the Law of Return (which does not require approval by the Rabbinate), Sizomu says they are not looking to leave their country.

“For people who want to move to Israel, they can do so individually,” he said. “But as a community, we are used to being together here as a country.”

The Abayudaya community, which numbers approximately 2,000 and is native to Uganda, traces its roots to the early 20th century, when a former leader read the Bible and embraced Judaism. 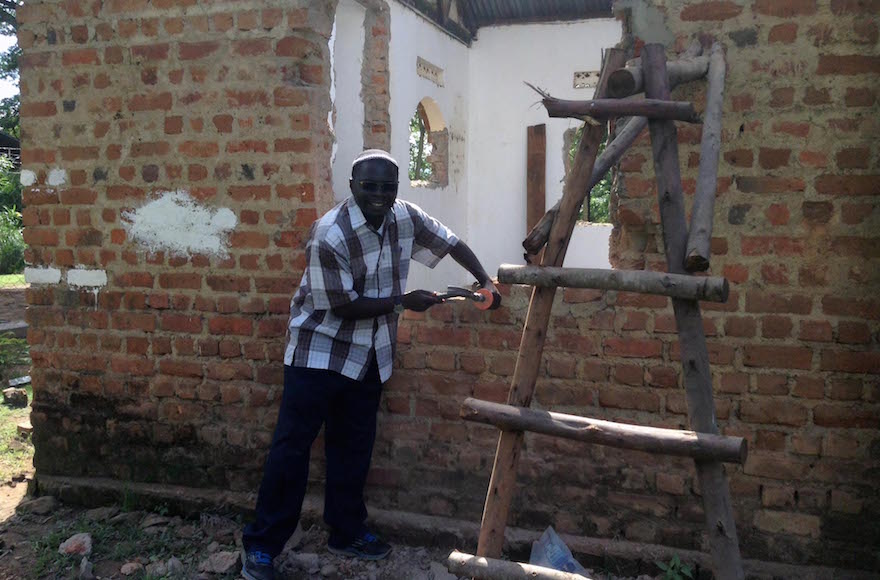 Diane Tobin, executive director of the nonprofit Be’chol Lashon, which worked with the community to build the synagogue, echoed that the project was about strengthening the community’s status in Uganda.

“It was important to establish that these are Jews who are not seeking to make aliyah to Israel — that’s not the main purpose,” Tobin, who has worked with the community since 2002, told JTA. “They want to be recognized as Jews for their own sake, and building infrastructure demonstrates that they are committed to being there in Uganda.”

The Abayudaya, which means “people of Judah” in the local language, have dealt with their share of hardship and persecution — such as when dictator Idi Amin banned the practice of Judaism in the 1970s — but today the situation is better. In February, Sizomu won a hotly contested seat for the Ugandan parliament, becoming the first Jewish lawmaker to serve in the body.

The new center will help to further improve ties with Muslim and Christian neighbors by making its services available to Ugandans of all religions, organizers said.

The complex includes a child care center and a food storage facility, neither of which is widely available in Uganda. Both will be available for use for a fee by residents of any religion and could benefit as many as 10,000 people, Sizomu estimated.

“The challenges we have do not discriminate, and we think that living together in harmony is part of this tradition — it is what we call ‘tikkun olam,'” Sizomu said, using the Hebrew phrase meaning to “repair the world,” a Jewish call to social action. 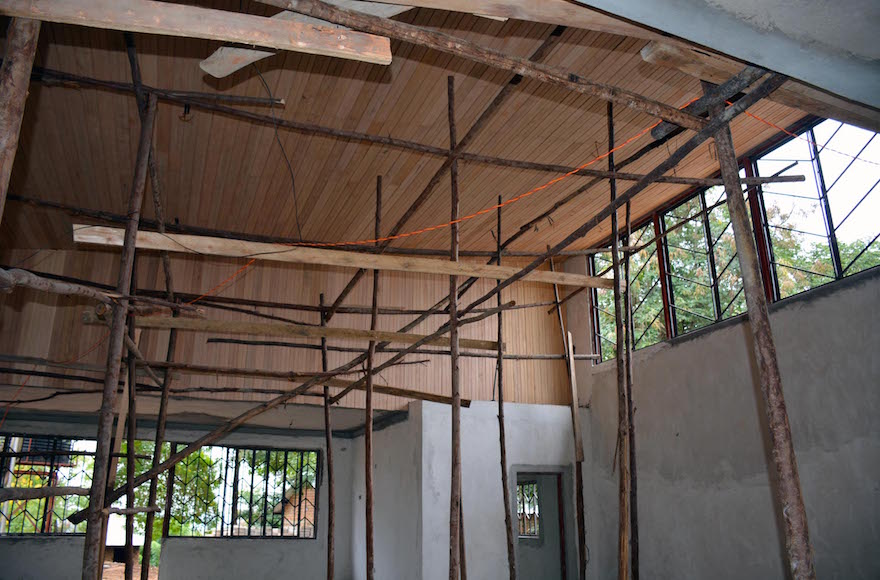 The interior of a synagogue under construction in Nabagoye, Uganda (Courtesy of Be’chol Lashon)

“It fosters good will,” Tobin said of the complex, recalling how Abayudaya ties improved with their Muslim and Christian neighbors after the Jewish community opened up wells that Be’chol Lashon helped to build.

“The Muslim well used to be closed, and because the Jewish well is open to everyone, the other well opened up as well,” she said.

Be’chol Lashon, whose mission is to promote racial and ethnic inclusiveness in the Jewish community, worked with Jews in Uganda to raise funds for the building, find an architect and draw up a plan, as well as monitor the progress on the ground. The group raised $300,000, with a California couple, Sue and Ralph Stern, donating about half the money.

Tobin said the new center is “going to make the community more visible.”

“The politics of religion are very specific [in Uganda], there are so many churches and mosques everywhere — that’s part of the motivation to have a wonderful building [for Jews],” she said.

Indeed, the synagogue will be a Jerusalem of sorts for the community, which is scattered among villages in the country’s eastern region. Members follow a biblical commandment to make pilgrimage to the ancient Temple in Jerusalem during the holidays of Passover, Shavuot and Sukkot — but they gather in Nabagoye rather than Israel. 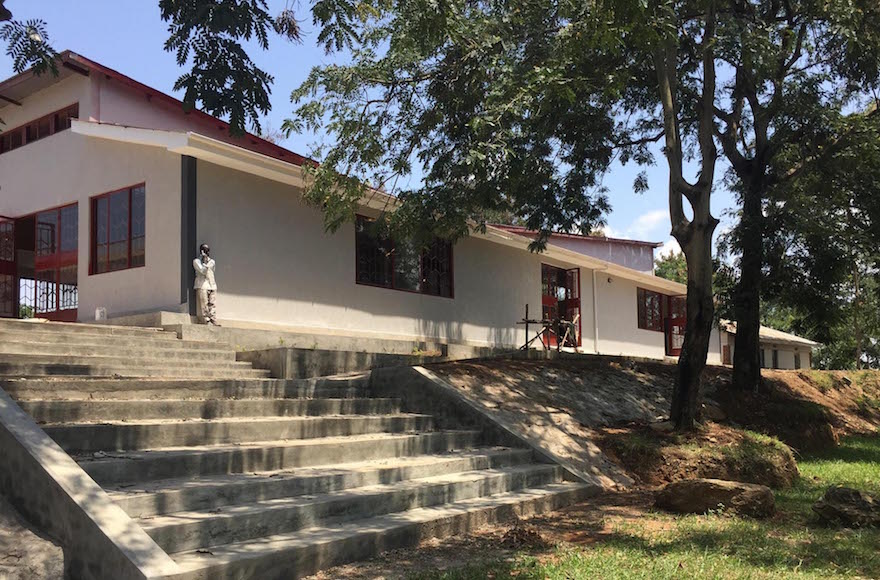 The new synagogue in Nabagoye, Uganda (Courtesy of Be’chol Lashon)