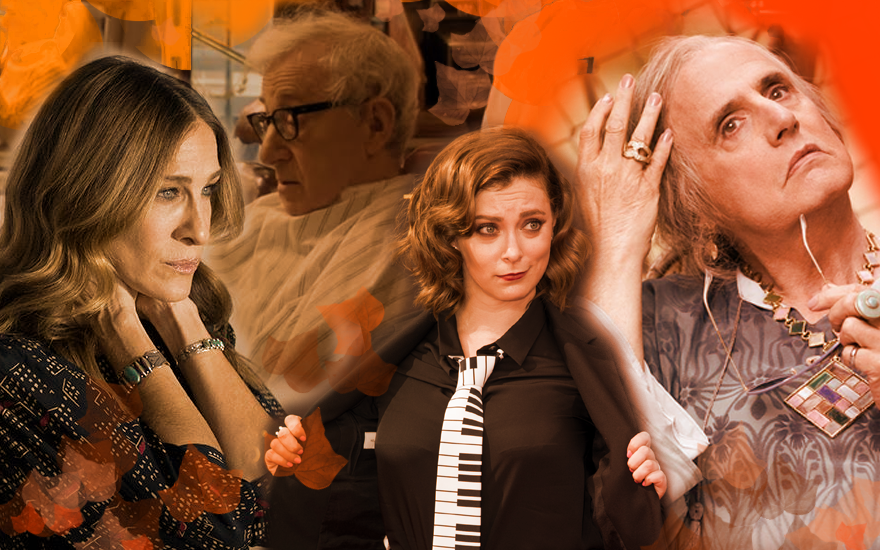 (JTA) — Fall is here, and with it comes cooler weather, earlier sunsets and an end to whatever magical spell or temporary insanity that possessed us to spend our free time outdoors rather than in front of our screens.

But now it’s time to bring out those snuggies, brew those hot beverages and binge watch some quality TV. Luckily, this season has some very exciting, very Jewish shows. From Woody Allen’s TV premiere to Sarah Jessica Parker’s long-awaited return to HBO, here are eight shows you need to watch this fall.

Some have already called Pamela Adlon’s “Better Things” the female version of “Louie.” It’s an obvious comparison to make: The Jewish actress is considered by many to be the secret star of Louie C.K.’s eponymous show, in which she plays his friend and sometime love interest. Like “Louie,” “Better Things” (which Adlon co-created with C.K.) is also semi-autobiographical: Adlon plays a divorced mother of three, and in real life has raised her three daughters as a single mom since 2001.

The first episode is already out and holds to its promise — “Better Things” is funny, dark and unflinchingly honest. It’s a complex portrait of a modern-day, single Jewish mom who has to do it all: work, housework and parenting. In one scene, Adlon’s daughter asks mom to get her some pot.

“Don’t you want me to have that clean, organic stuff?” the teen asks.

Adlon replies, “Honey, these things are normal, but you should be ashamed of them.”

Are there synagogues in Gotham City, the home of Batman? Who knows! But one thing we do know: The actor who plays this Batman attends synagogue regularly.

The TV series “Gotham,” which is about to enter its third season, takes place in Gotham City right after the murder of Bruce Wayne’s parents and before Wayne become a full-fledged superhero. Young Bruce is played by David Mazouz, a 15-year-old Sephardic actor. Mazouz and his family keep kosher and observe Shabbat.

You may have seen Mazouz before, opposite Kiefer Sutherland in the show “Touch” or guest starring in “The Office.” He’s formidable as young Bruce Wayne, channeling all the angst and fearlessness of a character with very Jewish origins. Jewish illustrator Bob Kane and Jewish writer Bill Finger created the character — a billionaire turned vigilante superhero following the murder of his parents — way back in 1939.

“Gotham” is dark and wonderful, with a cast of colorful characters. The best thing about Gotham City, some would argue, is its eclectic cast of villains, like Poison Ivy, Catwoman and the Penguin, all of whom are prominently featured on the show.

Remember that time we blinked and “The Big Bang Theory” was already in its 10th season? Yeah, it’s kind of unbelievable. The beloved show about a group of nerdy scientists stars Mayim Bialik — the star of “Blossom,” a relative of Israel’s national poet Haim Nachman Bialik and a frequent contributor for the parenting site Kveller— as Dr. Amy Farrah-Fowler and Jewish actor Simon Helberg as Howard Wolowitz, a neurotic Jewish engineer with an overbearing Jewish mom (yeah, we know). It’s a dorky comedy, full of fun pop-culture reference and geeky humor, and its characters share a comfortable chemistry that’s certainly fun to watch. If you’re not caught up yet, get going: nine seasons strong, you have a lot of binge watching to do in the next few days.

The TV show that has brought us the most eloquent portrayals of Jewish rituals — probably ever — is coming back. Created by Jill Soloway, “Transparent” features intimate scenes from a shiva, a Yom Kippur service and the chanting of a bat mitzvah Torah portion. Oh, and there’s a female rabbi, too.

“Transparent” gets up close and personal with modern American Judaism. Part of that is also its unflinching humor and set of deeply conflicted, angst-ridden characters, at the center of which is Jeffrey Tambor as Maura Pfefferman, the family’s former patriarch who comes out as transgender to her family.

The neuroses of Pfefferman family members is sometimes so dramatic that it is hard to watch, but “Transparent” is full of deep moments of human vulnerability that are worth sticking it out for.

“New Girl,” the quirky, twee comedy about a group of roommates starring fairly new member of the tribe Zooey Deschanel is coming back for a sixth season. JTA’s own Gabe Friedman has called the show the “anti-Seinfeld” for its sometimes uncomfortably awkward Jewish jokes, mostly surrounding its one Jewish character, Schmidt, a narcissistic yet kind of darling marketing associate. Schmidt is played by Jewish actor Max Greenfield.

Despite its awkwardness — or perhaps thanks to it — the show is surprisingly fun to binge watch and has a cozy heimishe feel. I suppose it’s the pumpkin spice latte of fall TV shows.

A round of cosmopolitans for everyone! It’s  finally happening: Sarah Jessica Parker is returning to HBO. But this time, the “Sex and the City” star won’t be leading a glamorous quartet of New York women looking to meet Mr. Big — er, we mean, Mr. Right. Rather, Parker’s character, Frances, finds herself on the other side of the coin: An unhappy mom of two, she’s taking ownership of her life by ending her lackluster marriage.

Don’t expect Manolos here, either: “Pretty much everything Frances wears is used, whether it’s from Etsy, vintage or thrift shops along the Northeast corridor,” Parker has said.

Also starring in the show: Thomas Haden Church and Molly Shannon. While the trailer is hardly mind-blowing, we’ll have to wait until October to see if “Divorce” is destined to be another cult classic.

We have to talk about this: Woody Allen has created and is starring in his first TV show, and it’s chock full of Jews. From young Jewish actor John Magaro, of “Big Short” fame, who has taken on the role of a nebbishy young Woody Allen look-alike, to the funny Rebecca Schull (“Wings”) to France’s favorite Jewish comedian, Gad Elmaleh. Oh, and there’s someone named Miley Cyrus in it, too.

“Crisis in Six Scenes,” a six-episode miniseries, follows a suburban Jewish-American family in the 1960s whose lives are “turned upside down” by an unexpected, freewheeling guest (that Cyrus girl). If you ask me, it sounds like a real party in the U.S.A.

Most significant, “Crisis in Six Scenes” marks the return to the screen of one of my favorite Jewish entertainers, Elaine May, following a decade-long hiatus. A creative, hilarious actress, comedian and director, her oeuvre, unlike Allen’s, hasn’t gotten the recognition it deserves. So if you’re feeling conflicted about watching anything directed by Allen, how about binge watching some of her old movies, or instead listening to some great Nichols and May?

If you had said a year ago that the TV show I would be most excited about would be a TV musical comedy about a “crazy ex-girlfriend,” I would have laughed in your face. I also would have been slightly offended because hey, that sounds pretty sexist. But it’s true: “Crazy Ex-Girlfriend” is my favorite show right now. And I’m not alone: The show’s star, Rachel Bloom, won a Golden Globe last year.

And it’s not sexist at all. In fact, it’s frank and delightful. The songs are catchy, delightful and sometimes tear inducing.

Bloom, who created the show, doesn’t shy away from her Jewish heritage. In a March interview with JTA, Bloom explained why her character, Rebecca, addresses her Jewish identity so much.

“Jews talk about being Jewish a lot,” she said. “They’re very aware of their Jewish identity, so in getting specific with the character, it was natural to make Rebecca own that Jewishness.”

Last season even featured a “JAP Rap Battle” in which Bloom tells her rival she’s “tripping like Birthright” and to “‘sheket be’vaka,’ shut the hell up.” I can’t wait for the Yiddish and Hebrew puns this season.