A French survivor seeks honors for his Rosh Hashanah rescuers 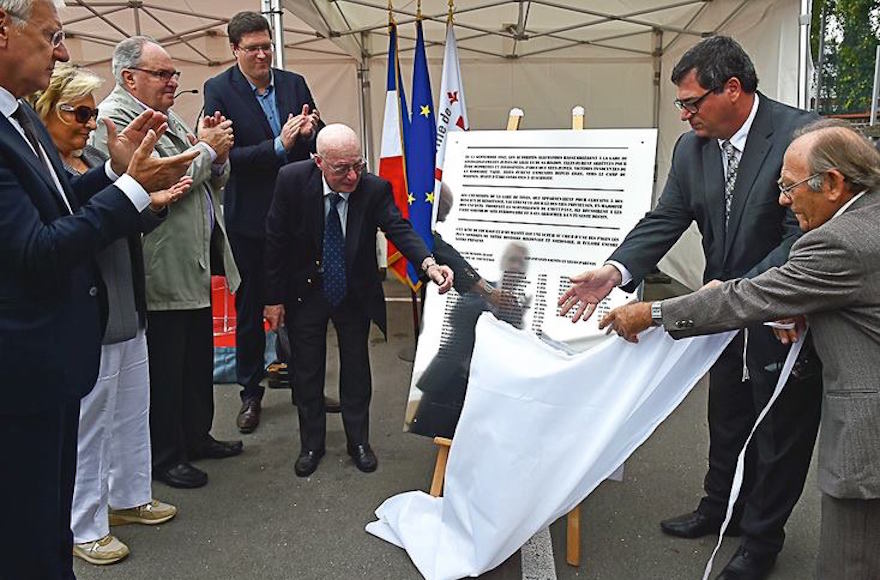 Jacques Stuzalft, left, helps unveil a plaque remembering the rescue of Jewish children of Lille, France by local railway workers, at a ceremony held in the northern French city, Sept. 9, 2016. (City of Lille, via Facebook)
Advertisement

(JTA) – For Jews all over the world, the High Holidays are a time for closure and new beginnings. Not for Jacques Stuzalft, an 84-year-old Holocaust survivor from France.

Haunted by his experiences on the eve of Rosh Hashanah when he was 10 years old, he relives his narrow escape from death each time the Jewish New Year comes around.

“It’s extremely emotional because it’s a real nightmare, worse than a nightmare, to have lived through it all,” he told France TV during a recent visit to the train station in the northern city of Lille, where on the eve of Rosh Hashanah in 1942, many of his friends were shipped off to Nazi death camps.

But Stusalft may find closure after all, after teaming with a local historian to give belated recognition to the courageous French railway workers who helped him survive.

On Sept. 11 of that year, Stuzalft arrived at the station with his mother and brother on orders of the Nazi forces occupying France. He was separated from his family there, like hundreds of other French Jewish children. But unlike many of his classmates, Stuzalft was rescued by a little-known ring of resistance fighters from the French SNCF railways company, along with at least 33 other Jews.

The impromptu rescue operation is a rare and hitherto overlooked bright spot in the dark annals of the state-owned railway firm. SNCF’s role in transporting Jews to their deaths has made it synonymous for many with French collaboration in the murder of a quarter of the country’s Jews during the Holocaust. Until 1995, SNCF fought tooth and nail to reject any responsibility for its employees’ obedient role in shipping off tens of thousands of Jews to their death. 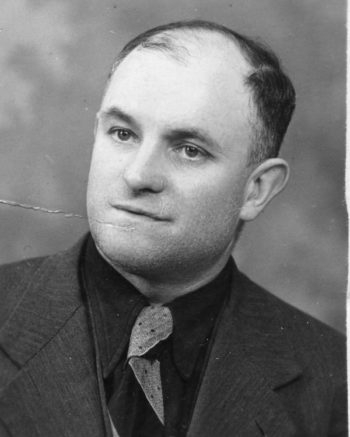 Marcel Hoffmann was one of 24 French railway workers who helped save Jewish children from deportation by Nazi occupation forces on Sept. 11, 1942. (Courtesy of France TV)

Stuzalft, whose parents and brother also survived the war, was among at least 34 Jews saved by a ring with 24 known members. They worked for SNCF in Lille, according to historian Grégory Celerse, who published his findings for the first time in a French-language book on Sept. 6.

The actions of SNCF employees on that Rosh Hashanah in Lille are unusual also because the French resistance initiated few efforts to save Jews. And they are unique, too, in that they were executed almost without any planning and resulted in one of the largest rescue actions for Jews ever attempted by a group in occupied France.

On that September day in 1942, one of the warmest of the year, “the members of the group of saviors saw trucks unloading people, mostly women and children, from Lille’s Jewish-Polish population, outside their workplace,” Celerse said. “They had a quick chat and decided to act.”

At the train station, an employee of SNCF smuggled Stuzalft through a back passage while another employee, Marcel Hoffmann, distracted the German guard whose job it was to make sure no one escaped the death train.

“While I was led away, Marcel Hoffmann took out his identity card to show the German soldier, telling him: ‘See, I have a German name, too,’” Stuzalft recalled at the station during an interview aired in July by France 3.

Several of the 24 saviors grabbed buckets and brooms and approached the parked train while pretending to be part of the cleaning detail, according to Celerse’s four years of research on what happened that day in Lille.

Supervised by German military police and railway workers, the saviors created a string of distractions to smuggle a growing gaggle of Jewish children into an abandoned warehouse.

When distraction was impossible, the ring members used deception: One of them rescued a Jewish girl by putting her on his bicycle seat and chatting to her in a fatherly manner to give the impression that she was his daughter joining her dad at work.

Six years old and just separated from her mother, the girl was ordered by her rescuer to stay quiet and hidden at an unused office. Hours later he smuggled her away. Meanwhile, other saviors took her baby brother and helped him over a wall.

Some of the children were given over to the resistance. Others were brought to safe houses by their saviors. One woman carried a 3-month-old baby away from the station in a duffel bag.

The heroism documented by Celerse stands in stark contrast to the widespread perception of SNCF’s Holocaust-era record, which was not helped by its legal battles well into 2006 to avoid paying compensation to the families whose loved ones were transported to their deaths on SNCF trains.

Criticism of SNCF, which initially maintained it was not responsible for actions performed under Nazi occupation or the French collaborationist Vichy government — eased somewhat after the institution in 2014 of a $60 million compensation fund in exchange for immunity from further lawsuits in the United States. Still, the firm’s Holocaust-era record was “mostly negative,” Celerse said.

“But there was another aspect to the story represented in the brave actions of the 24 employees who saved dozens of children on Rosh Hashanah in Lille,” the historian said, adding that he has received no funding from SNCF in preparing his research.

Celerse and Stuzalft are working on getting Hoffman recognition from the Yad Vashem Holocaust commemoration authority in Jerusalem as a Righteous Among the Nations – Israel’s designation for non-Jews who risked their lives to save Jews from the Holocaust.

To date, only one of the 24 heroes from Lille’s train station has been so recognized, according to Celerse.

On Sept. 11, the railway station was to host the unveiling ceremony of a plaque with the names of all 24 known ring members. Five of the children they rescued were scheduled to attend the event.

Individuals with further information on the actions of the SNCF volunteers from Lille can write to nordoccupe@gmail.com