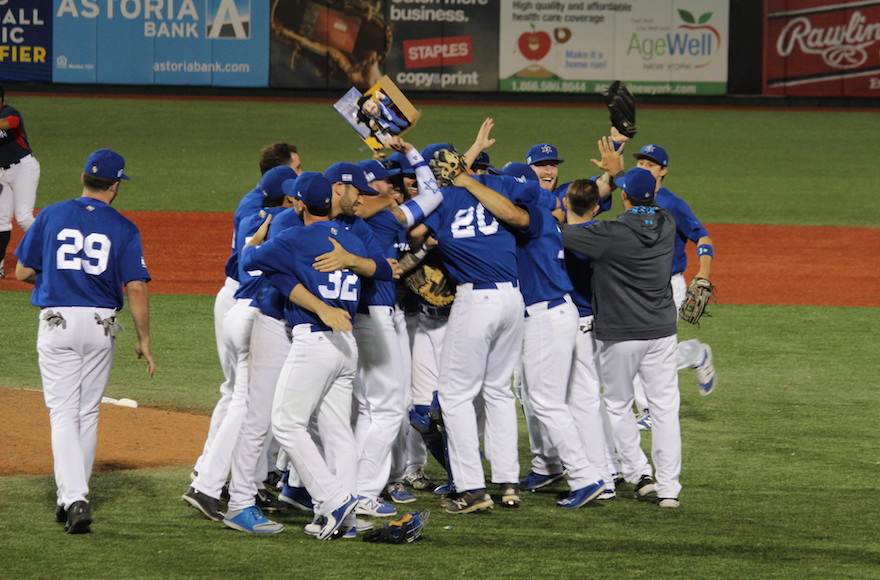 (JTA) — Five pitchers combined on a four-hitter and Israel slammed three home runs in a 9-1 victory over Great Britain in the championship game of the World Baseball Classic qualifier in Brooklyn, earning its first bid to the international tournament.

Israel took a no-hitter into the eighth inning of Sunday’s game at MCU Park on Coney Island, with starter Jason Marquis throwing four innings and striking out five and winning pitcher Josh Zeid the next three with three strikeouts.

Catcher Ryan Lavarnway had two hits, including a two-run homer in a four-run fifth inning, and drove in three runs.

Israel advances to the World Baseball Classic, a quadrennial event modeled after soccer’s World Cup, and will play March 7-10 in South Korea. The other teams in their pool are Chinese Taipei, South Korea, Netherlands.

In the March games, major leaguers will be released from their spring training commitments to play for their countries’ teams. Israel’s manager, Jerry Weinstein, said after Sunday’s win, however, that he preferred maintaining the camaraderie of the Brooklyn roster.

“I feel very loyal to the guys I was with for the last week and a half. I feel an obligation to them,” said Weinstein, 73, a coach in the Colorado Rockies system. “For me as a manager, I’m connected to these guys. I’d be very happy to take this team and go anywhere to play.”

Pitchers Dean Kremer and Shlomo Lipetz are the only Israeli citizens on the squad. The rest are players who qualify under the WBC’s “heritage rule,” which allows Israel to field players who would qualify for citizenship under Israel’s Law of Return.

In 2012, Israel fell a game short of qualifying for the tournament.

Against Great Britain, outfielder Blake Gailen snapped a scoreless tie in the fifth with a two-run homer.

It was the second victory for Israel in the qualifying tournament over Great Britain, which defeated Brazil on Saturday to reach the title game.

Marquis had also started the opener against Great Britain, a 5-2 victory.  For the clinching game, the longtime major leaguer told reporters after the game, he “went back to the drawing board” to work on his off-speed pitches to “make sure I’d be sharp.”

Israel edged Brazil, 1-0, on Friday to advance to the final.