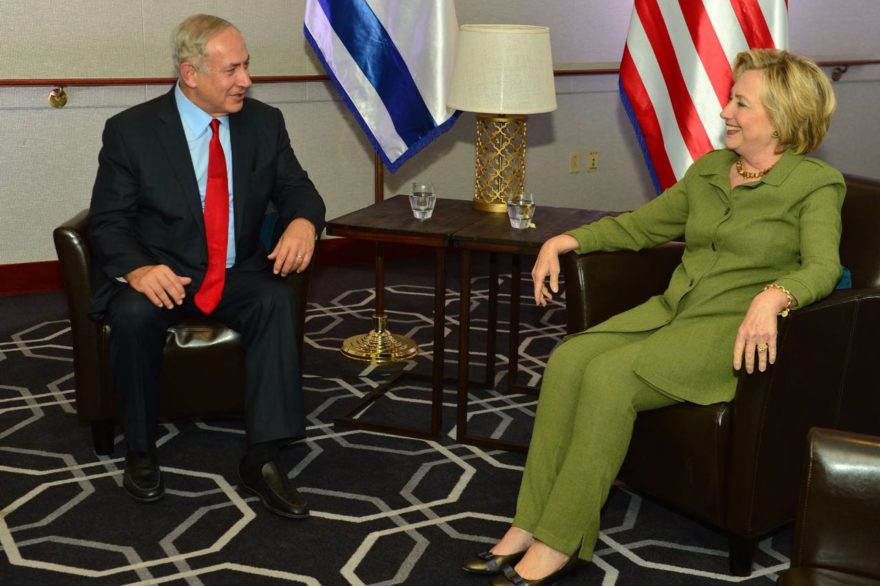 WASHINGTON (JTA) — Hillary Clinton said she opposed any U.N. Security Council bid to impose a solution to the Israeli-Palestinian conflict during a meeting with Prime Minister Benjamin Netanyahu just hours after a summit between the Israeli leader and Donald Trump.

Netanyahu’s meetings with the Democratic nominee and earlier Sunday with her Republican rival were a study in similarities – principally in pledging close defense cooperation with Israel – and differences, especially in Clinton’s holding up Israel as a model for pluralism and Trump lauding its erection of a separation wall from the Palestinians.

“The secretary reaffirmed her commitment to work toward a two-state solution of the Israeli-Palestinian conflict negotiated directly by the parties that guarantees Israel’s future as a secure and democratic Jewish state with recognized borders and provides the Palestinians with independence, sovereignty, and dignity,” said a statement from the presidential campaign of the former secretary of state.

“Secretary Clinton reaffirmed her opposition to any attempt by outside parties to impose a solution, including by the U.N. Security Council,” the statement said.

Netanyahu, who is in New York to attend the opening of the U.N. General Assembly, met with the nominees on the eve of their first debate. He met with Trump at the real estate developer’s headquarters in Manhattan, Trump Tower, and Clinton at the W Hotel in the same borough. Her headquarters are across the river, in Brooklyn.

The prime minister sought assurances that neither nominee would join international efforts to preempt the direct talks with the Palestinians that Israel wants. Palestinian officials prefer international mediation until Israel freezes settlement expansion.

Netanyahu also reportedly fears that President Barack Obama in his final months in office will allow a Security Council resolution outlining a final status for a two-state solution to go through. Obama has taken pains to keep that from happening in his nearly eight years in office and has not indicated any plans to reverse course.

Unlike Clinton, Trump in his statement did not explicitly commit to opposing outside attempts to impose a solution, but he did check off other boxes on Netanyahu’s list of expectations from U.S. nominees, including the expectation that the Palestinians recognize Israel as a Jewish state and his pledge to recognize Jerusalem as its capital.

Clinton did not mention Jerusalem in her statement, but she affirmed Israel’s status as a “democratic Jewish state.” She said she would enforce last year’s deal between Iran and six major world powers to exchange sanctions relief for a rollback of nuclear development. Netanyahu vehemently opposed the deal.

Trump’s statement said only that the two men discussed the agreement at length; Trump in the past has said he would renegotiate the deal.

Clinton in her statement committed to combating the boycott Israel movement; Trump did not mention it. Both nominees swore to uphold defense assistance for and cooperation with Israel.

Clinton affirmed “the common values of democracy, equality, tolerance, and pluralism.” Trump’s statement said he “recognized that Israel and its citizens have suffered far too long on the front lines of Islamic terrorism” and discussed with Netanyahu Israel’s security wall in the West Bank.

One of the keenest differences in this election has been over diversity. Clinton embraces it, while Trump has delivered broadsides against Muslims and Mexicans and has pledged to build a wall between the United States and Mexico. 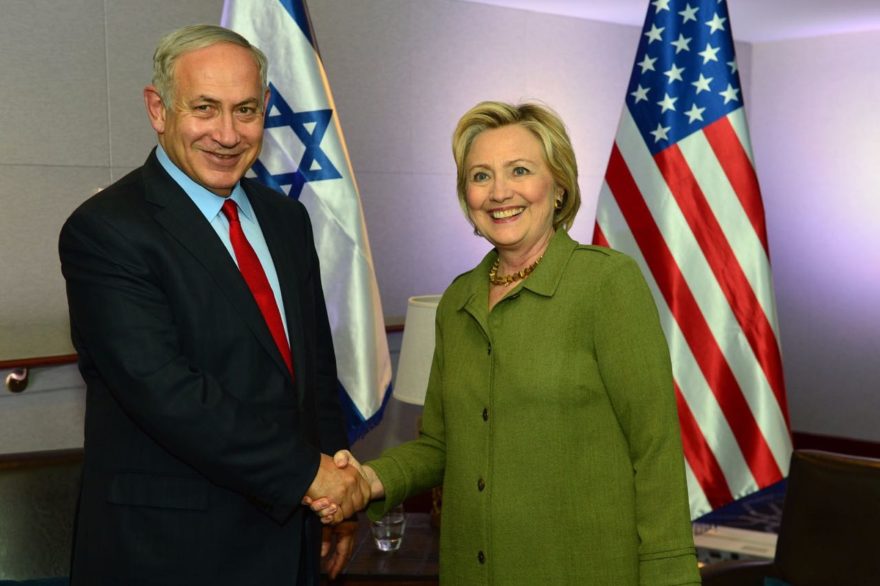 The one after the meeting with Trump noted that his ambassador to the United States, Ron Dermer, and Trump’s son-in-law Jared Kushner were present at the meeting.

Following the meeting with Clinton, its statement noted that Dermer and Clinton’s top foreign policy adviser, Jake Sullivan, were also in attendance. He noted both meetings with photos on Twitter.