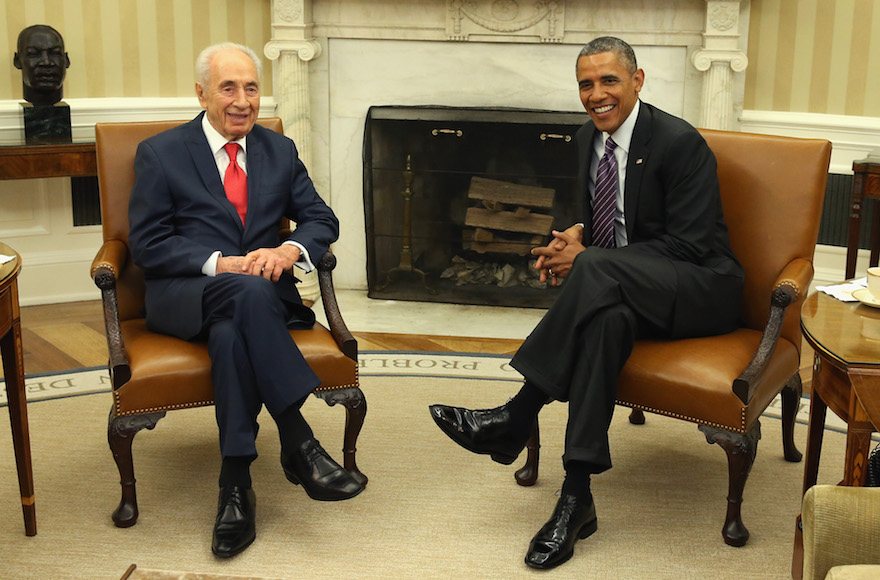 “There are few people who we share this world with who change the course of human history, not just through their role in human events, but because they expand our moral imagination and force us to expect more of ourselves,” said the unusually lengthy statement coming out late Tuesday, an hour or so after the death of Israel’s elder statesman at 93 was announced.

“My friend Shimon was one of those people,” Obama said.

The statement, issued also in the name of the first lady, Michelle Obama, recounted Obama’s meetings with Peres in Israel and in Washington, D.C., including in 2012, when Obama awarded Peres the Presidential Medal of Honor.

Obama’s characterizations of Peres were suffused with an appreciation of what the American president has acknowledged is his preferred vision of Israel — that of a nation peopled by pioneers ready to defend their country but also committed to pursuing peace.

“Shimon was the essence of Israel itself — the courage of Israel’s fight for independence, the optimism he shared with his wife Sonya as they helped make the desert bloom, and the perseverance that led him to serve his nation in virtually every position in government across the entire life of the State of Israel,” he said.

“Perhaps because he had seen Israel surmount overwhelming odds, Shimon never gave up on the possibility of peace between Israelis, Palestinians and Israel’s neighbors — not even after the heartbreak of the night in Tel Aviv that took Yitzhak Rabin,” referring to the 1995 assassination of Israel’s prime minister by a Jewish extremist.

“A light has gone out, but the hope he gave us will burn forever,” Obama said in the concluding paragraph. “Shimon Peres was a soldier for Israel, for the Jewish people, for justice, for peace, and for the belief that we can be true to our best selves — to the very end of our time on Earth, and in the legacy that we leave to others. For the gift of his friendship and the example of his leadership, todah rabah, Shimon.”

Separately, former President Bill Clinton, who presided over the Oslo peace accords that led to the 1994 Nobel Peace Prize for Peres, Rabin and Palestinian leader Yasser Arafat, ‎issued a statement in his name and that of his wife, Democratic presidential nominee Hillary Clinton.

“His critics called him a dreamer,” the Clintons’ statement said. “That he was – a lucid, eloquent dreamer until the very end. Thank goodness. Let those of us who loved him and love his nation keep his dream alive.”