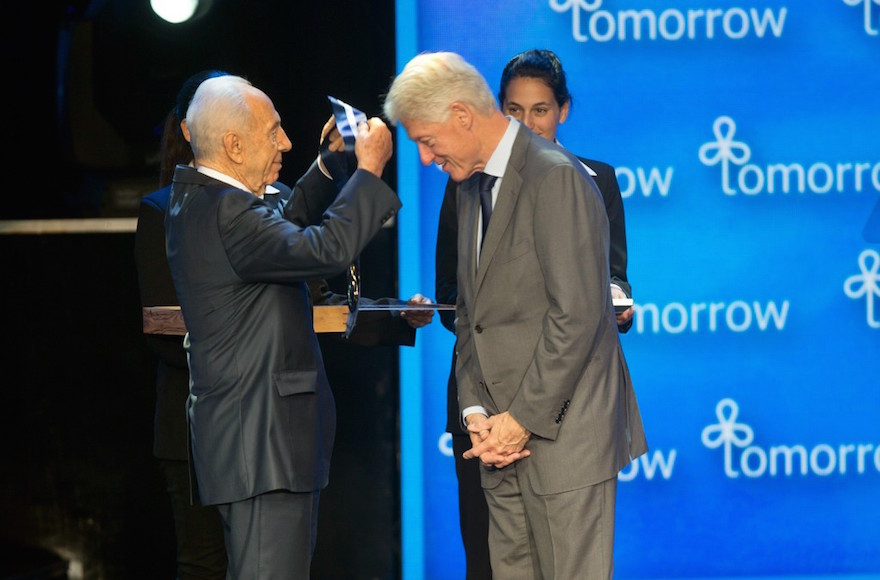 Peres, who died early Wednesday morning at 93, will be buried Friday morning at the Mount Herzl cemetery in Jerusalem. Clinton presided over the Oslo peace accords that led to the 1994 Nobel Peace Prize for Peres, Prime Minister Yitzhak Rabin and Palestinian leader Yasser Arafat.

Peres died two weeks after suffering a massive stroke. His body will lie in state outside the Knesset in Jerusalem on Thursday to allow the public to pay respects.

Pope Francis had originally said he would attend but will not since he is due to begin a three-day visit that day to Georgia and Azerbaijan.

Leaders of the European Union, including its president, Donald Tusk, and foreign policy chief, Federica Mogherini, are also planning to attend.

It is not clear if the Palestinians will send a delegation. Israel Radio reported Wednesday that the P.A. will not come unless it is invited by the family.

Israel’s minister of culture and sport, Miri Regev, said Wednesday at the meeting of the Ministerial Committee on Symbols and Ceremonies that the state, coordinated by the committee, is “preparing for a very large and complex funeral that will coordinate very many elements.”

The director general of the Foreign Ministry and the Jerusalem District Police commander, as well as representatives from the Defense Ministry, Knesset and the Prime Minister’s Bureau, among others, attended the meeting.

Regev said the timing of the funeral also will be constrained by the start of the Jewish Sabbath at sundown Friday.

Peres will be buried between the plots of Rabin and his wife, Leah. Peres’ wife, Sonia, who died in 2011, is buried in the Ben Shemen Children’s Village. Peres’ daughter, Tzvia Walden, told WallaNews that her mother knew that if she was not buried on Mount Herzl, the couple would be separated in death.

“My mother knew this and chose her way, and he respected that,” Walden said.

Workers on Wednesday began preparing the gravesite on Mount Herzl. A helipad and small airstrips also were being constructed near the cemetery to allow world leaders to arrive for the funeral from Ben Gurion International Airport without disrupting traffic into Jerusalem, Walla reported.

CORRECTION: A previous version of this story reported that Democratic presidential nominee Hillary Clinton and President Barack Obama were scheduled to attend the funeral. Clinton’s campaign staff said reports of her attending were inaccurate; the Obama administration has yet to announce the president’s plans.