Memorial to Peres held at UN headquarters in New York 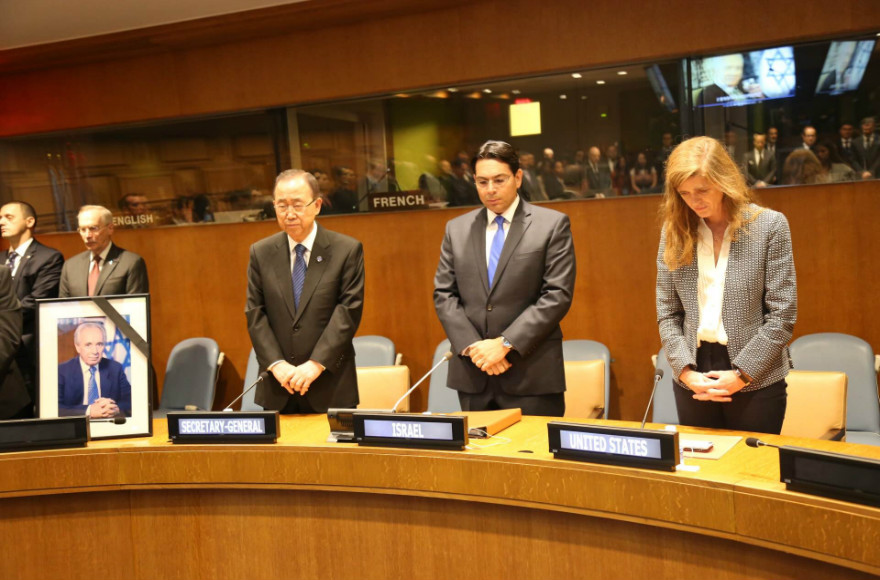 (JTA) — United Nations Secretary-General Ban Ki-moon said he “had the privilege to benefit from his wisdom” at a memorial service for former Israeli President Shimon Peres at the world body’s headquarters in New York.

Ambassadors from more than 40 countries attended the memorial held by Israel’s U.N. mission on Thursday, a day after Peres died following a massive stroke. Among those on hand was U.S. Ambassador Samantha Power.

The Israeli mission also opened a condolence book for the ambassadors to share their thoughts in memory of Peres, which will later be available to the general public.

“President Peres, one of our founding fathers, was a man of vision and optimism who dedicated his life to the State of Israel,” said Israel’s ambassador to the U.N., Danny Danon. “He contributed so much to Israel’s safety and security and never lost hope. This symbolizes the story of Zionism.

“After years of representing the true face of Israel to the world, today the parliament of nations has gathered to pay their respects. We will remember him as he lived his life until his last days, full of energy and a willingness to work for a better future for Israel. President Peres will continue to inspire us all. May his memory be a blessing.”

Ban told the ceremony: “I join in the sorrow for loss. I had the privilege to benefit from his wisdom. His leadership will be missed as someone who worked to realize the dream of security and peace for Israel.”

Power in her remarks said “Shimon Peres spent his entire life building Israel. He never lost his youth or his yearning for peace, and he believed the greatest threat to peace is a loss of hope by the younger generation.”