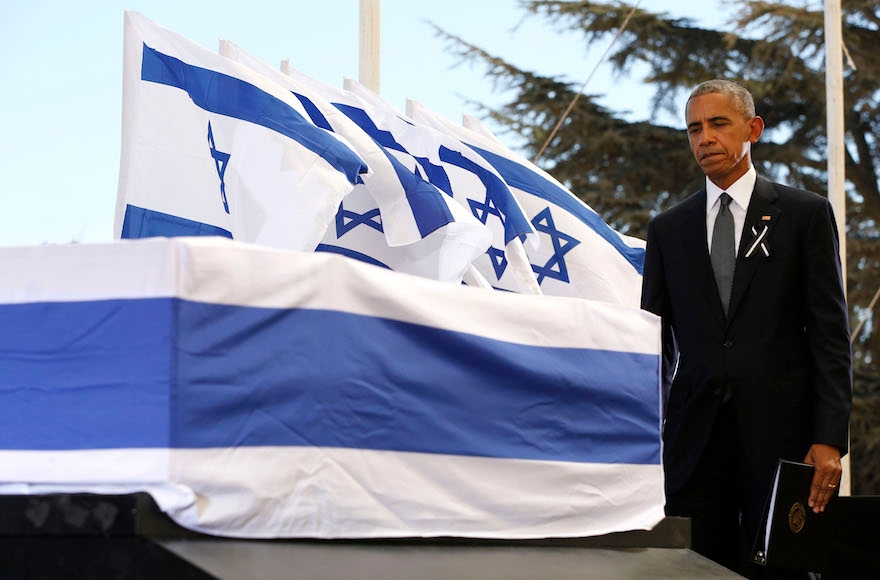 In addition to fond personal recollections, many of those who took the stage alongside Peres’ Israeli-flag-draped coffin offered their visions of the peace that eluded the former president and prime minister. Peres died early Wednesday at 93 after suffering a major stroke two weeks earlier.

President Barack Obama, the last of the 10 speakers, called Palestinian Authority President Mahmoud Abbas’ presence in the front row “a gesture and a reminder of the unfinished business of peace.”

“[Peres] believed the Zionist idea would be best protected when Palestinians, too, had a state of their own,” Obama said. “The region is going through a chaotic time. Threats are ever-present. And yet, he did not stop dreaming and he did not stop working. … Now the work of peacemaking is in the hands of Israel’s next generation and its friends.”

Before the funeral ceremony began, Israeli Prime Minister Benjamin Netanyahu and Abbas shook hands beneath jumbo screens flashing photos of Peres over the years. The two leaders have not formally met since 2010, during a failed round of U.S.-brokered peace talks.

“It’s been a long time since we last met,” Abbas reportedly told Netanyahu.

“I very much appreciate that you came to the funeral,” Netanyahu replied.

But Abbas was not among the leaders Netanyahu greeted in his emotional eulogy for Peres, whom he described engaging in “nearly nightlong discussions” about which came first — peace or security. Netanyahu thought security and Peres peace, he said.

“We were both right,” Netanyahu concluded. “Peace will not be achieved other than by permanently preserving our power. But power is not an end in itself. It is not the real power. It’s a means to an end. The goal is to ensure our national existence and coexistence.”

Peres was long a hawkish defender of Israeli security. He played a major role in establishing the country’s defense industry, nuclear deterrence and settlement enterprise. But he was among the first of Israel’s leaders to warn about the threat posed by continued control of the West Bank and became a leading advocate of territorial compromise for peace with the Palestinians. Only after his election as president in 2007 did Peres receive the kind of regard in Israel that he enjoyed internationally.

Among the estimated 4,000 mourners who gathered under a sprawling white tent at Israel’s national cemetery were dozens of foreign dignitaries, including President Francois Hollande of France, Prime Minister Justin Trudeau of Canada, and Prince Charles and former Prime Minister Tony Blair of Britain.

Israeli politicians attended from across the political spectrum. Yair Lapid, head of the center-left Yesh Atid party, arrived with left-wing Labor Party Knesset member Shelly Yachimovich. Likud lawmaker Yehuda Glick, an advocate for Jewish prayer on the Temple Mount, came with a bodyguard. A Palestinian gunman nearly killed him in 2014.

Jewish billionaires and Israel backers Chaim Saban and Sheldon and Miriam Adelson of Nevada were also on hand. 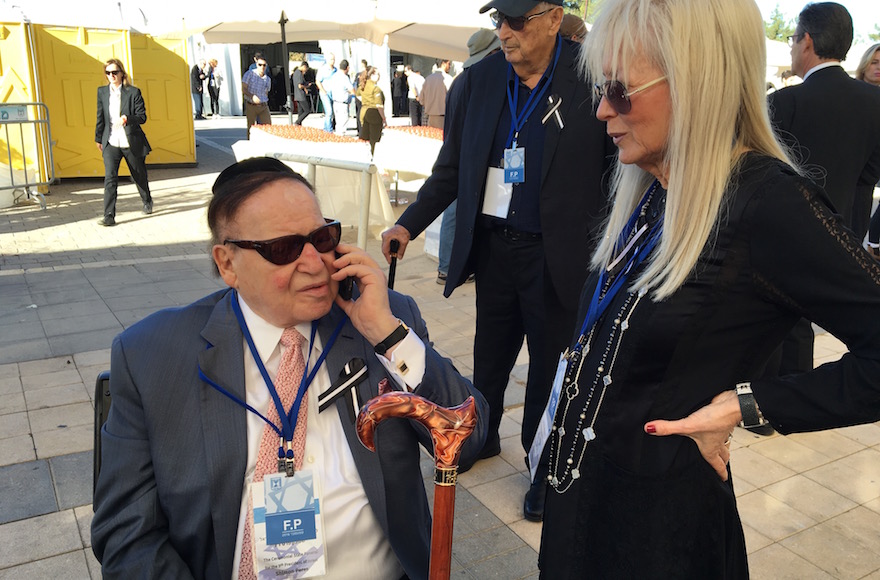 Former President Bill Clinton, who brokered the Olso Accords that Peres helped spearhead in an effort to make peace with the Palestinians, referenced John Lennon’s peace anthem “Imagine” in his eulogy.

“Shimon could imagine all the people living in the world in peace,” Clinton said. “In his honor I ask that we remember his luminous smile and imagine.”

Clinton was part of a 33-member American delegation, which included Secretary of State John Kerry but not his predecessor, Democratic presidential nominee Hillary Clinton, who some reports had said would attend. Security at the funeral and around Jerusalem was tight, with some 8,000 police officials guarding and closing streets.

Amos Oz, an esteemed Israeli writer and a friend of Peres, argued in his remarks that a Palestinian state was the only option, saying there was “no choice but to divide this home into two apartments and turn it into a two-family house.”

“In their heart of hearts, all sides know this simple truth,” he said. “But where are the leaders with the courage to come forward to make it come to pass? Where are the heirs to Shimon Peres?”

With Rosh Hashanah, the Jewish New Year, starting Sunday, David D’Or, a prominent Israeli singer beloved by Peres, performed a rendition of the High Holiday prayer “Avinu Malkeinu.” Peres’ three children then took the stage one after the other.

His younger son, Chemi, first spoke briefly about his father in English, saying, “He saw in all of you leaders, friends and partners in his quest for peace. We will treasure his memory and honor his legacy.”

Switching to Hebrew, he addressed his late father: “You kept your promise to your beloved grandfather when you bid him farewell on your first stop on the way to the Land of Israel. You never forgot what it means to a Jew. And I promise you that neither will I.”

Notably absent from the funeral were Arab heads of state, though Foreign Minister Sameh Shoukry came from Egypt, and Bahrain, Jordan and Oman were to send representatives. Arab-Israeli leaders also skipped the event.

By way of explanation, Aymen Odeh, the head of the Joint List of Arab political parties in Israel, said on Army Radio Thursday, “I can tell you that it is complicated.” Odeh has told the Israeli media that Arab Israelis view Peres’ legacy as mixed, noting his role in the 1970s in expanding settlements and  in the 1990s pressing for a peace agreement.

After the funeral, which included military honors, Peres was buried between Yitzhak Rabin and Yitzhak Shamir, two former prime ministers with deeply conflicting views on peace and security, but both fierce rivals of Peres.