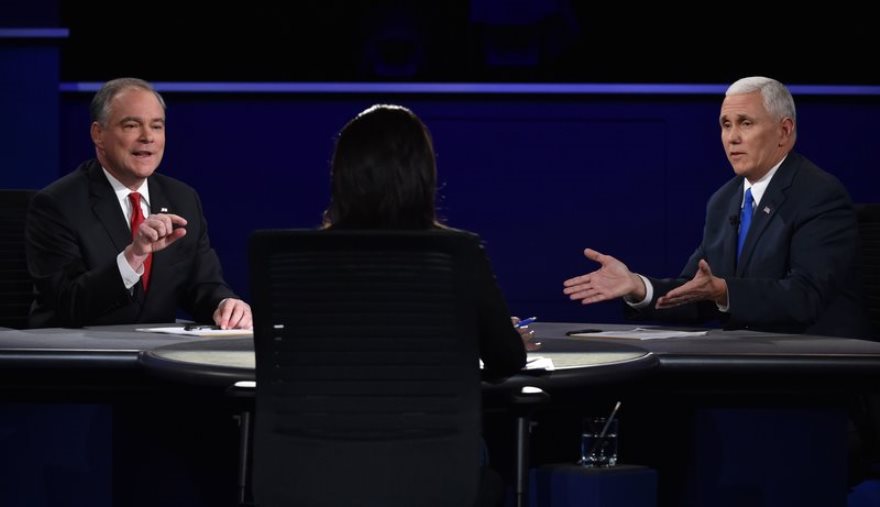 Kaine, a Virginia senator, at least four times on Tuesday night at Longwood University in his home state listed the deal as an accomplishment for his running mate, Democratic presidential nominee Hillary Clinton, who was secretary of state during President Barack Obama’s first term.

“She worked a tough negotiation with nations around the world to eliminate the Iranian nuclear weapons program without firing a shot,” Kaine said.

Clinton led the efforts to sign on much of the international community — including leading skeptics of a possible deal, Russia and China — to the tough sanctions that brought Iran to the talks. The deal exchanges sanctions relief for Iranian guarantees that it is not developing nuclear weapons.

The Indiana governor eventually countered by noting that much of the inspections regime overseeing Iranian compliance lapses after 15 years.

“You essentially guaranteed that Iran will someday become a nuclear power because there’s no limitations once the period of time of the treaty comes off,” Pence said.

While the inspection regime is reduced after 15 years, some elements stay in place, and Iran has signed onto agreements that it will not develop nuclear weapons.

Kaine said that Israeli military chiefs have said that Iran has stopped its nuclear weapons advances.

“Even the Israeli military says it stopped,” he said, citing Lt. Gen. Gadi Eizenkot, the military chief of staff.

That is the case, but Eizenkot and others also have added Pence’s “for now” caveat, noting that much of the inspections regime lapses after 15 years.

Pence also chided Kaine for skipping Israeli Prime Minister Benjamin Netanyahu’s March 2015 speech to Congress opposing the deal. Nearly 60 Democrats skipped the speech, in part because Netanyahu and the Republican leadership organized the address without informing the White House or congressional Democrats. Kaine countered that since then, he has met and consulted with Netanyahu “in his office.”

The only vice presidential debate this campaign was aggressive, with the nominees talking over each other. Pence brought up issues that Trump was faulted for missing in the first presidential debate last week, like Clinton’s decision to use a private email server when she was secretary of state. Kaine repeatedly asked Pence to directly defend Trump’s controversial broadsides against Mexicans and Muslims, which Pence seemed reluctant to do.

Kaine, discussing gun laws, also referred to Liviu Librescu, the Romanian Israeli Holocaust survivor who died blocking a gunman during the mass killing at Virginia Tech in 2007, when Kaine was governor of the state.

“He had survived the Holocaust,” Kaine said. “Then he survived the Soviet Union takeover of his country. But then he was a visiting professor at Virginia Tech and he couldn’t survive the scourge of gun violence.”