After the Veep debate: Who was right about the Iranian nuclear deal, and do Israelis agree? 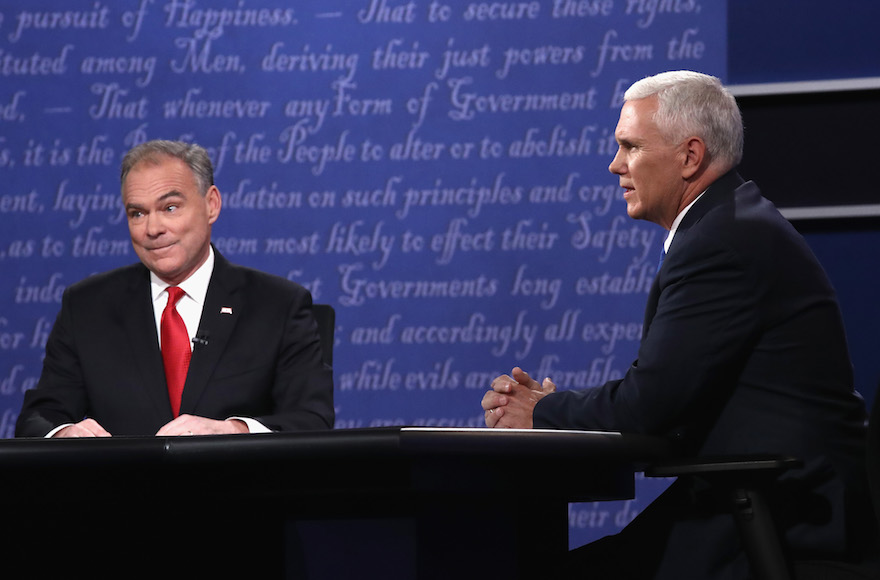 Seven times, Indiana Gov. Mike Pence said no, it did not.

What Hillary Clinton did

Clinton, secretary of state in President Barack Obama’s first term, helped line up the international sanctions that brought Iran to the table.

Pence pointed out that Congress in 2010 passed what may have been the toughest sanctions in U.S. history on Iran. As a member of the Republican leadership in Congress at the time, he helped lead the passage of the sanctions.

“The goal was always that we would only lift the sanctions if Iran permanently renounced their nuclear ambitions,” Pence said during the debate.

That was the goal of some congressional sanctions backers, particularly among Republicans. The goal of the Obama administration, and some of its Democratic backers, was to put in place U.S. sanctions as a means of undergirding the architecture for international sanctions. The threat of not being able to do business with the United States was the stick used to bring in more reluctant partners. The carrot? U.S. willingness to moderate sanctions once the international community was on board.

Once the international sanctions were in place, their goal became more fluid and subject to the back and forth of diplomacy, and less susceptible to the harder line adopted by the Congress.

Clinton’s accomplishment was bringing into the sanctions regime major trading partners like India, China and Russia, which made the sanctions biting. Including those nations, however, also guaranteed that the international sanctions regime would never hew to the restrictions that Congress had in place.

The international community as a collective was not ready for the absolute shutdown of uranium enrichment that Pence and others in Congress had sought and still seek. The more reluctant countries were ready to suspend trade with a major oil supplier for only a limited period. Other countries, including European partners, said that demanding a complete shutdown violated the letter of the nuclear non-proliferation treaty, which allows a civilian nuclear program, and to which Iran is a signatory.

What the nuclear deal did

Iran insists that its nuclear program was never about weapons. Western powers, particularly the United States, Israel and France, are skeptical in the extreme, saying that while weaponization may not have been achieved, the level and breadth of uranium enrichment underway before the nuclear deal, and Iran’s investment in delivery systems identified with nuclear attacks, strongly suggest that the program’s ultimate goal was weapons.

The deal applies a strict inspections regime that keeps Iranian enrichment to levels that cannot be weaponized for eight years. Those limits are lessened for another seven years, which is when – after 15 years in all — the relatively unfettered access for international nuclear inspectors ends.

“You essentially guaranteed that Iran will someday become a nuclear power because there’s no limitations once the period of time of the treaty comes off,” Pence said in the debate.

That’s not quite true. After the 15-year period, Iran will comply with the “additional protocol” to the nuclear non-proliferation treaty, which allows inspectors to return on short notice. A credible finding by a Western nation’s intelligence service, or by the International Atomic Energy Agency, could trigger such a return.

That provision underlies Kaine’s claim that the weapons program “has been stopped” – although, as The Times of Israel has pointed out, his running mate Clinton opts for less absolute language. Twice — at the American Israel Public Affairs Committee’s annual conference in March, and at the Democratic National Convention in Philadelphia in July — Clinton said the deal “put a lid on” Iran’s nuclear ambitions.

Israel and congressional opponents of the Iran deal cite the failure of inspections in North Korea to argue that less intrusive inspections don’t work. Proponents of the deal say the additional protocol was instituted precisely as a means of redressing the gaps in the North Korea inspections regime and note that similar provisions – allowing the short-notice entry of inspectors – are believed to have kept Saddam Hussein’s Iraq from going nuclear.

Does Israel believe the deal stopped Iran from going nuclear?

Kaine, making this claim, at first cited Israel’s military, and then specified a name: Lt. Gen. Gadi Eizenkot, the military chief of staff. Here’s how Kaine put it:

“Even the Israeli military says it stopped.”

And then: “That’s what the Israeli joint chiefs of staff is saying right now. Gadi Eizenkot, you can go check it.”

It’s true that Eizenkot and others have said the deal is keeping Iran’s suspected weapons program stalled, but what’s missing from Kaine’s claim is the implied “for now” in statements by Israeli security brass, past and present.

Here’s Eizenkot, speaking in January, after the deal’s implementation was launched: “The deal has actually removed the most serious danger to Israel’s existence for the foreseeable future, and greatly reduced the threat over the longer term.” (Emphasis added.)

And here’s Amos Yadlin, the former military intelligence chief: “For at least the next 10 years, the threat of nuclear armament in Iran has been reduced.”

Pence countered, “That’s not what Israel thinks,” and then cited Israeli Prime Minister Benjamin Netanyahu, who continues to believe the plan is a bad one. But Pence’s argument sets up a bit of a straw man: Both of Kaine’s citations are of Israel’s military, not its political leadership.

Obama, in citing Israelis in defending the deal, has not gone so far as to say that Israel’s political establishment likes it; he says that the security establishment agrees that it is working according to plan.

“It’s the assessment of the Israeli military and intelligence community — the country that was most opposed to this deal — that acknowledges this has been a game-changer, and that Iran has abided by the deal, and that they no longer have the sort of short-term breakout capacity that would allow them to develop nuclear weapons,” the president said in August.

That comports with Eizenkot’s assessment in January: “Without a doubt the nuclear deal between Iran and the West is a historic turning point. It is a big change in terms of the direction that Iran was headed, and in the way that we saw things.”