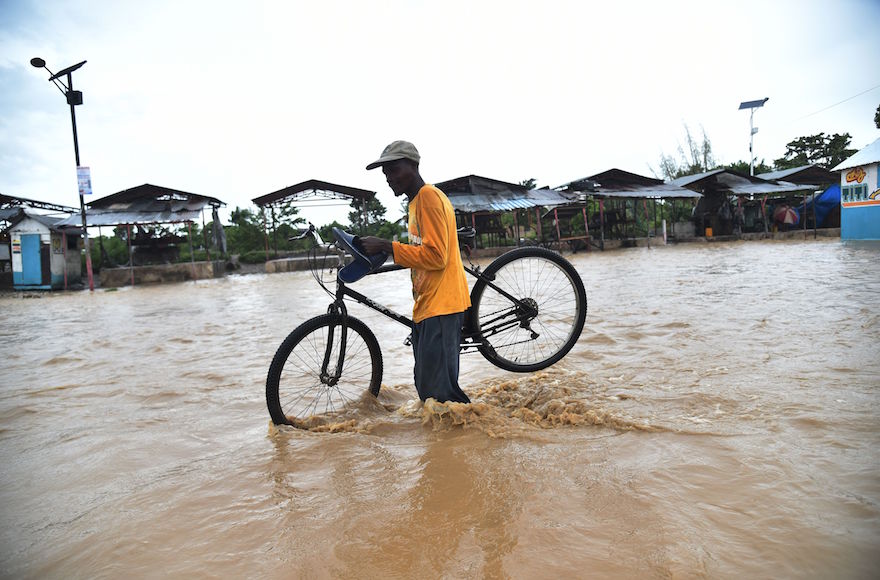 A man trying to cross the overflowing of the river Rouyonne, in the commune of Leogane Port-au-Prince, Haiti, Oct. 5, 2016. (Hector Retamal/AFP/Getty Images)
Advertisement

(JTA) — The American Jewish Joint Distribution Committee is providing aid to Haiti after a hurricane caused widespread damage in the Caribbean country.

The Jewish humanitarian group, partnering with the on-the-ground relief organization Heart to Heart International, is focusing on providing medical aid and serving the basic needs of those affected by Hurricane Matthew, according to a statement.

At least seven people died in Haiti as the most powerful Atlantic tropical storm in nearly a decade made landfall Tuesday and left flooding and rivers of mud that washed out roads and a crucial bridge. The Weather Channel, citing Haiti Libre, reported that “14,530 people have been displaced, 2,703 families are affected and 1,885 houses are flooded.”

JDC, which provided aid in Haiti following an earthquake there in 2010, will focus its work in the country’s south, which experienced major flooding. The Jewish group will work with local organizations to assess the needs of those affected by the storm.

“Our hearts go out to the people of Haiti, and the wider region, in the wake of Hurricane Matthew’s devastation,” said Alan Gill, who heads JDC.

“JDC activated its network of international and local partners and is mobilizing relief efforts in an expression of humanitarian solidarity and Jewish values,” he added.

American Jewish World Service is also collecting donations for immediate relief and support for the long-term recovery for Haiti.