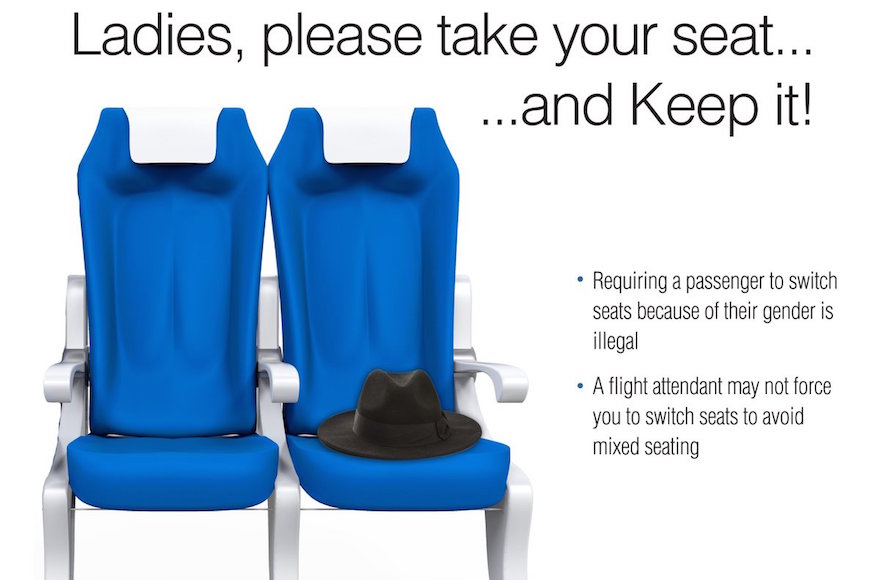 A billboard informing women on flights to Israel that they do not have to switch seats to accommodate haredi Orthodox Jewish passengers was rejected by the Port Authority of New York and New Jersey. (Twitter)
Advertisement

https://t.co/tePcGGrHsf We attempted to take our #Rights_On_Flights campaign to the next level and hit a wall… Read all about it! pic.twitter.com/hjIqfzPtmt

(JTA) – A billboard informing women on flights to Israel that they do not have to switch seats to accommodate haredi Orthodox Jewish passengers was rejected by the Port Authority of New York and New Jersey.

However, the Port Authority now says it is reviewing its ad guidelines, “making it likely that the seating ad will eventually appear at a local airport,” according to The New York Times, which reported Sunday on the rejection of the ad last month.

Sponsored by the Israel Religious Action Center, the public and legal advocacy arm of the Reform movement in Israel, the ad reads: “Ladies, please take your seat … and keep it.” It explains that requiring a person to switch seats because of gender is illegal and that flight attendants are not allowed to ask a passenger to switch seats to enable segregation by gender.

The center, known as the IRAC, planned to hang the billboard in the El Al airlines passenger waiting area at Newark Liberty International Airport in New Jersey.

Guidelines for ads in airports, subways and bus stations say they must be for a product or a service and cannot offer a religious or political message. Allowances are sometimes made for public service announcements, though that is left to the discretion of the Port Authority.

The IRAC has hired a civil rights lawyer to convince the Port Authority to allow the billboards to hang, and he has already provided some legal precedents in favor of it, according to the Times.

In recent years there have been increasing complaints by women who have been asked to switch seats, because male haredi passengers find it immodest to sit next to a woman. In one example, an 81-year-old Holocaust survivor last December sued El Al after she was asked to change seats on a flight from Newark Liberty to Tel Aviv.