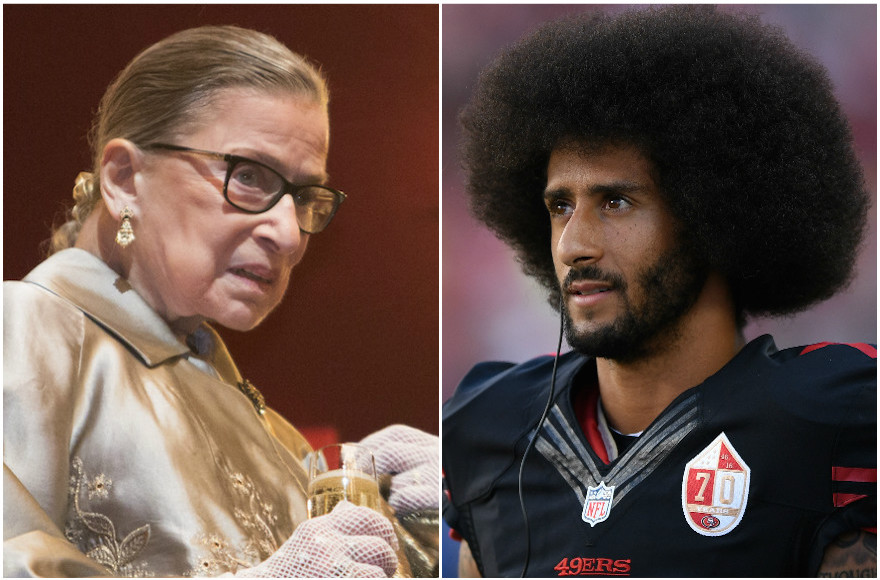 Ruth Bader Ginsburg came down hard on American football player Colin Kaepernick, who has created a controversy by refusing to stand up during the American national anthem in protest of racism.

“I think it’s dumb and disrespectful,” the Supreme Court Justice said of Kaepernick and other athletes who followed suit in kneeling during “The Star-Spangled Banner.”

Ginsburg compared the act to the burning of the American flag, in an interview with journalist Katie Couric published Monday.

“I would have the same answer if you asked me about flag burning. I think it’s a terrible thing to do, but I wouldn’t lock a person up for doing it,” Ginsburg said, adding that she strongly objects to “the point of view that they are expressing when they do that.”

Kaepernick, a quarterback for the San Francisco 49ers, began his protest this year, which saw a string of high profile cases in which police shot dead unarmed black men.

“I am not going to stand up to show pride in a flag for a country that oppresses black people and people of color,” Kaepernick, who is African-American, told NFL Media. “To me, this is bigger than football and it would be selfish on my part to look the other way. There are bodies in the street and people getting paid leave and getting away with murder.”

Ginsburg did not elaborate on the reasons behind her contempt for Kaepernick’s protest. Her comments may come as a surprise to some who see her as a progressive idol, and who throughout her career has championed women’s rights.

In the interview published Monday, Ginsburg also drew connections between her experience with anti-Semitism — including seeing a lawn sign as a young girl that read “No Dogs or Jews allowed” — and Trump’s call for a ban on Muslim immigration to the U.S.

“All I can say is I am sensitive to discrimination on any basis because I have experienced that upset. … I looked at that sign, and I said, ‘I am a Jew, but I’m an American, and Americans are not supposed to say such things,’” Ginsburg said.

“America is known as a country that welcomes people to its shores. All kinds of people. The image of the Statue of Liberty with Emma Lazarus’ famous poem. She lifts her lamp and welcomes people to the golden shore, where they will not experience prejudice because of the color of their skin, the religious faith that they follow,” she continued.