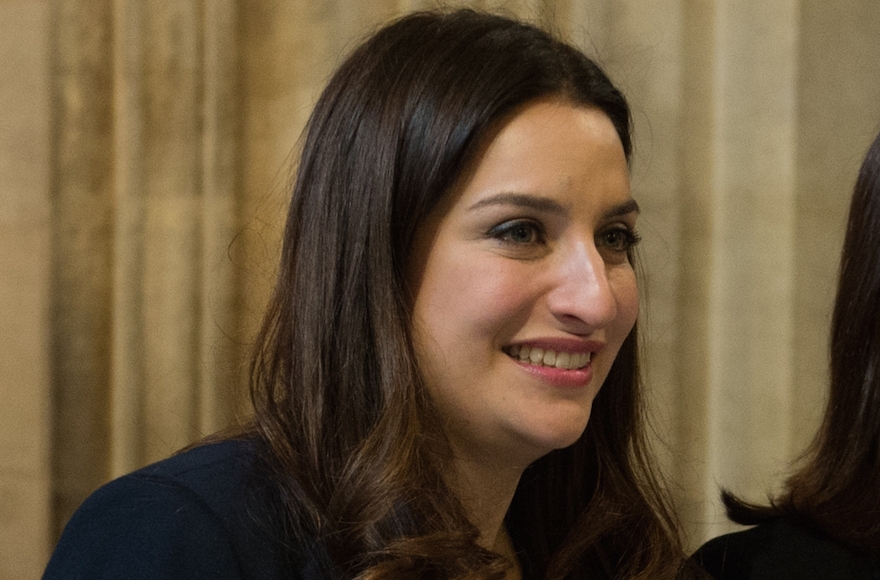 (JTA) — Luciana Berger, a well-known Jewish lawmaker in Britain’s Labour Party, said her family was pained and worried over threats and anti-Semitic slurs made at her.

Berger, who rarely speaks about her private life in interviews, made the statements in a filmed interview posted online Wednesday by the Liverpool Echo ahead of Britain’s National Hate Crime Awareness Week.

“More often than not you experience it alone, and that can be hard. And then when your family find out about it, it’s difficult for them as well because they are concerned about your safety and well-being, and they shoulder that pain and upset as well,” she said.

Earlier this year a British national, John Nimmo, pleaded guilty to sending Berger a death threat. He was investigated after Berger called police following anti-Semitic threats, including one that said, “You are going to get it like Jo Cox did.”

Cox was a lawmaker who was stabbed to death earlier this year, allegedly by a right-wing extremist.

The threats to Berger, which were sent online along with a photograph of a large kitchen knife, are also said to have made reference to her religion.

Months before becoming Britain’s prime minister, Theresa May mentioned Berger in a speech she delivered while serving as home secretary to the Board of Deputies of British Jews, the country’s main umbrella group for British Jewish communities.

The impact of online hatred, May said, “was clearly demonstrated over the summer when Luciana Berger, the Labour MP, was subjected to a torrent of anti-Semitic abuse on Twitter. And I am pleased that case was reported to the police and resulted in a successful prosecution and custodial sentence.”

The board has been explicit about the anti-Semitism problem of Labour under its current leader, Jeremy Corbyn.

A far-left politician who in 2009 called Hezbollah and Hamas his “friends” – an expression he recently said for the first time he regretted using – Corbyn has been accused of encouraging vitriolic speech against Israel and the Jews by befriending anti-Semitic movements and individuals.

He has rejected the allegations and vowed to punish any Labour member who was caught making anti-Semitic statements, but the president of the board, Jonathan Arkush, said that most British Jews cannot trust Labour under Corbyn. The board’s vice president, Marie van der Zyl, said Labour’s internal probe this year of anti-Semitism was a “whitewash.”

Berger did not join fellow Labour Jews in criticizing Corbyn.

Separately, the board and the American Jewish Committee on Thursday announced that they had signed an association agreement that AJC said in a statement “marks a new chapter in an increasingly close relationship between the two organizations.”

Earlier this year, the two organizations partnered on the AJC’s Mayors United Against Anti-Semitism campaign. The board facilitated the joining to the initiative of London Mayor Sadiq Khan. He followed his predecessor, Boris Johnson, in joining the public statement of more than 500 mayors in the United States and Europe against rising anti-Semitism and the use of anti-Zionism as a cover for anti-Semitism.