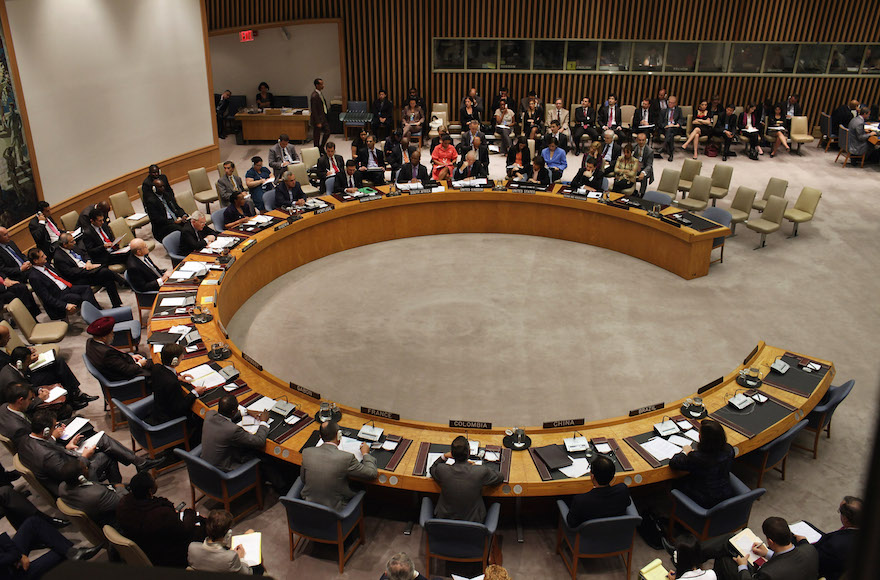 NEW YORK (JTA) — At a U.N. Security Council forum debate on Israeli settlements, human rights groups slammed Israel’s expansion in the West Bank and called on the international community to take action against what they called the occupation of Palestinian lands.

The three speakers at the Friday meeting in New York on the topic of “Illegal Israeli Settlements: Obstacles to Peace and the Two-State Solution” were representatives of the left-wing group Americans for Peace Now and the Israeli human rights organization B’Tselem, as well as a law professor from the Free University of Brussels. Malaysia, Egypt, Senegal, Angola and Venezuela organized the meeting.

Lara Friedman, director of policy and government relations of Americans for Peace Now, said actions by Israel threatened its character as a democracy and criticized settlement expansion, a significant portion of which she called “illegal growth.”

Friedman criticized campaigns “by reactionary groups in Israel and by the Israeli government itself” against human rights groups, such as her group’s Israeli sister organization, Peace Now.

“These groups are being targeted because their work reveals facts that some prefer to hide — facts that challenge the official Israeli government narrative,” she said.

On Israel’s settlement expansion, Friedman said some was illegally granted government authorization under Prime Minister Benjamin Netanyahu. She added that the expansion “will lead inevitably to permanent occupation.”

Hagai El-Ad, executive director of B’Tselem, criticized the international community’s failure to stop Israel’s occupation, which he called “a legal guise for organized state violence.” He said the Security Council  has “a moral responsibility” to take action to end the occupation.

Francois Dubuisson, an expert in international law at the Free University, called for an international boycott of Israel’s settlements and the implementation of measures against foreign companies that invest in them.

The event came a day after Israeli and U.S. politicians, along with Jewish groups, slammed a UNESCO resolution that ignored Jewish ties to Jerusalem’s Old City. Israel’s education minister, Naftali Bennett, said Israel would suspend its cooperation with UNESCO over the decision, which he said “denies history and encourages terror.”

UNESCO’s director-general, Irina Bokova, seemed to express a different view from the resolution on Friday.

“To deny, conceal or erase any of the Jewish, Christian or Muslim traditions undermines the integrity of the site, and runs counter to the reasons that justified its inscription on the UNESCO World Heritage list [in 1981],” Bokova said.

While the UNESCO resolution affirms “the importance of the Old City of Jerusalem and its Walls for the three monotheistic religions,” it refers to the Temple Mount several times only as Al-Ḥaram Al-Sharif, the Islamic term for the Temple Mount, without mentioning its Jewish names in Hebrew or English. It also uses the term Buraq Plaza, placing “Western Wall Plaza” in quotes, appearing to deny a Jewish connection to the site, where the Jewish Temple stood until the middle of the first century C.E.