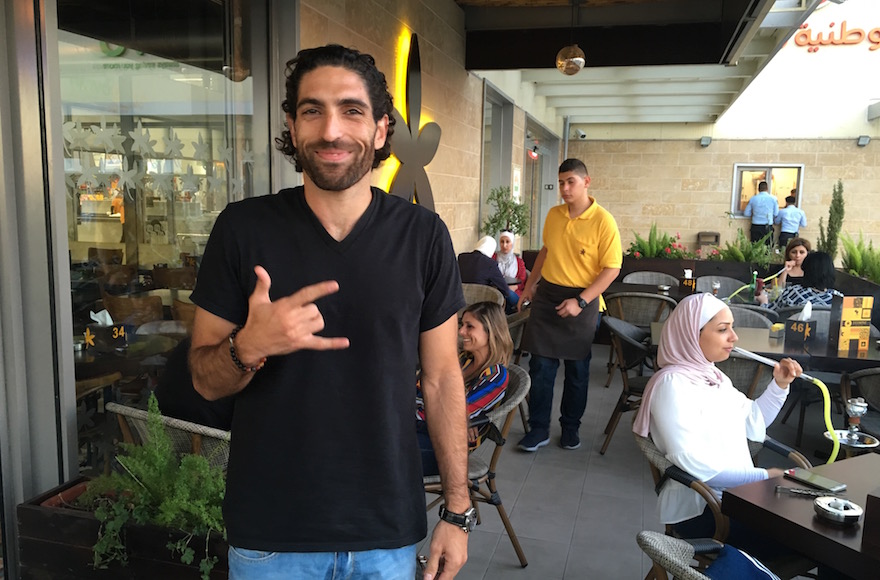 The “terror capital” of the West Bank.

This city has earned its militant nicknames with generations of violent resistance, whether aimed at the Ottomans, the British, the Israelis or the current Palestinian Authority government.

Nablus may not seem like an ideal destination for an upscale California-style cafe. But owner John Saadeh is optimistic after opening Jasmine Cafe here in August. He is following a business plan that has worked for him before: Put women first.

Just as when he launched the Jasmine chain in Ramallah years ago, Saadeh is screening men at the entrance and going out of his way to hire women, challenging the traditional norms of Palestinian society.

“We’re bringing a little Western lifestyle to the east side of the world,” Saadeh told JTA. “We have people drinking cappuccinos and ladies mingling and men smoking shisha [water pipe] and college students coming to hang out and just socially exchange with one another.

“To make all that happen in Palestine, we need to make sure the [gender] ratio is good, so that women feel comfortable and they keep coming back.”

In 2011, Saadeh and his father opened the first Jasmine in Ramallah, the de facto capital of the West Bank. Inspired by his time in the San Francisco Bay Area, where he was born and later attended college and law school, Saadeh had long wanted to create a venue where men and women could hang out.

“Ever since high school here, I felt a little suffocated. I was like: Are you guys serious? We still live like this?” said Saadeh, explaining that every time conflict with Israel flares, social progress stalls or reverses.

“With your boys, you could hang out at the coffee shops or the pool hall. But the only places to take girls were restaurants. So I always had the idea for Jasmine in the back of my mind.”

Aside from personal and business motives, Saadeh hopes to help push his society forward — and maybe even toward peace with Israel.

“But if we look forward to the future, and what we can become rather than what she should’ve become, it’s a positive state of mind for the society, and people don’t have that here. People are walking around like they took our land, they killed our people and stuff. It’s all this negative. You don’t feel the positive vibe.”

Jasmine quickly became a hot spot in Ramallah’s emerging cosmopolitan scene of cafes, bars and restaurants. The city was in the midst of an economic and social boom fueled by the Palestinian Authority’s renewed state-building efforts and the accompanying flood of foreign money and NGO assistance.

The cafe is now a brand name among in-the-know Palestinians. On any given day, local politicians and celebrities can be found there mingling with foreigners. 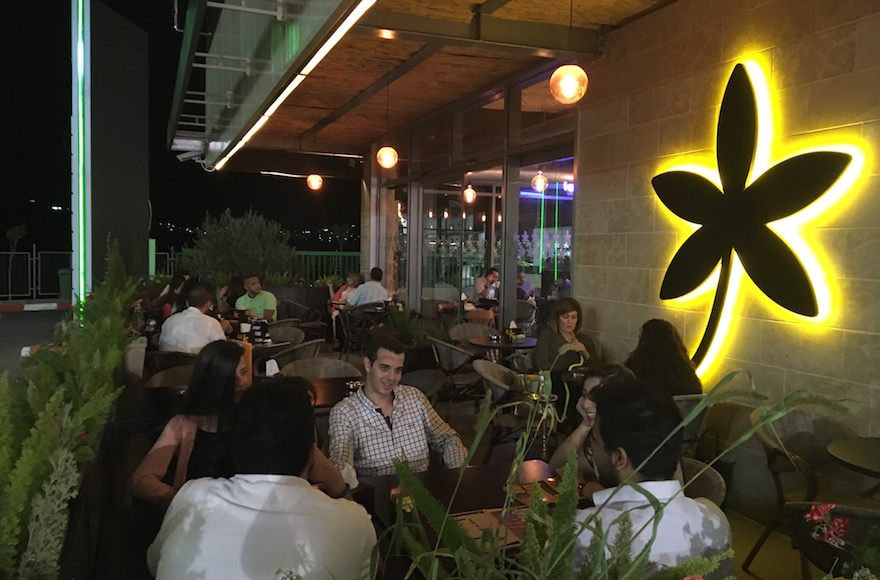 Saadeh wants Jasmine to be part of a similar process in Nablus, a Palestinian commercial center in the mountains of the northern West Bank. As he is well aware, there are major obstacles: Recent attempts by Palestinian security forces to crack down on lawlessness led to clashes in the streets. The Palestinian Authority, after two security officers were shot dead by armed men in the city on June 30, launched raids it said found “large quantities of weapons and ammunition”; thousands marched in the streets in August to protest the crackdown and the death in custody of a suspected “outlaw.”

And Nablus is a deeply traditional society, where families guard their honor and their women.

“In Palestinian society in general, women don’t really have a lot of spaces that we are allowed to be in,” said Nasreen Hadad Haj-Yahya, the head of the Arab-Jewish Relations Project at the Israel Democracy Institute, who lives in Tayibe, a mostly Arab city in central Israel. “The public space unfortunately belongs to males. And we don’t have places like gardens, parks where you can go with your children.

“Nablus is surrounded by a lot of refugee camps, and the economic situation is really bad. As much as anything, that influences the ability to be progressive.”

But Saadeh sees the clashes as a sign that the Palestinian Authority is imposing the rule of law. Once it does, he expects economic and social progress to follow.

“I feel like Nablus now is similar to what Ramallah was 10 years ago,” he said. “All you need to do is open up a little bit. Bring in little bit of money, some nonprofits here and there, and it’s right there.”

Avi Issacharoff, an Israeli journalist who specializes in Palestinian affairs, agreed there were reasons to be optimistic about the Palestinian Authority bringing Nablus under its control, but cautioned that the situation is unstable.

“It’s kind of a gamble I would say to open a new franchise in Nablus,” he told JTA. “I won’t tell you it won’t happen. We might even be seeing a process now with these clashes. But if something will happen to [Palestinian Authority President Mahmoud] Abbas, God forbid, the whole story will be completely different. Forget about quiet.” 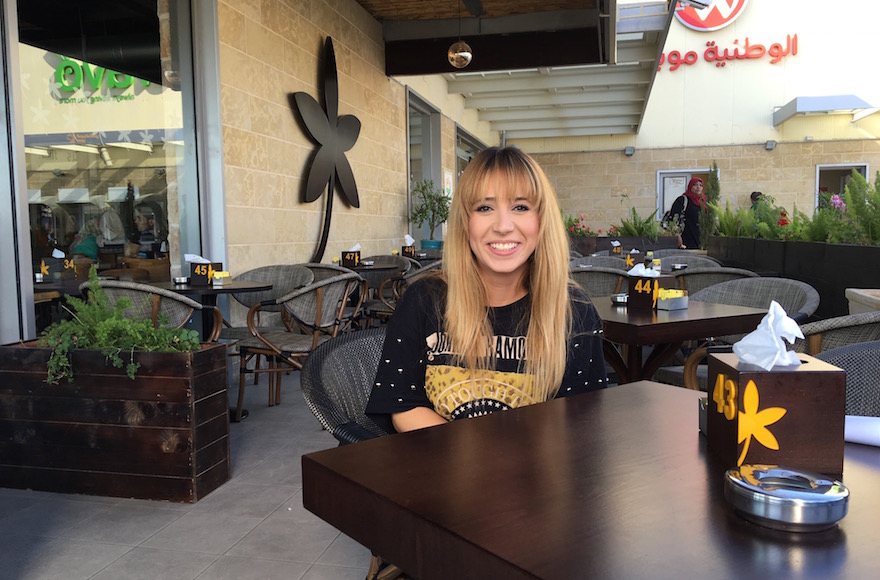 Hostess Nagla Aburous sitting at the Jasmine Cafe in Nablus before her shift, Sept. 18, 2016. (Andrew Tobin)

In the meantime, Jasmine has the advantage of being above the fray. Located in the hilltop Rafidia neighborhood, the cafe occupies an entire two-story building made of glass, local stone, wood and metal. Jasmine’s yellow-and-brown leaf logo is plastered on everything from the signage to the menu, which offers American favorites like hamburgers, salads and iced tea. There is no alcohol, which is prohibited by Islamic law, though the Ramallah location offers it off menu.

Jasmine in Nablus shares a privately secured parking lot and entrance with a high-end supermarket and children’s play center. Down the street is An-Najah National University, the biggest in the West Bank or the Gaza Strip, where men and women attend school together in a relatively liberal environment (although Jewish critics insists it harbors pro-Hamas faculty and student leaders).

Still, Saadeh said he must practice a bit of affirmative action to keep Jasmine from looking like a traditional coffee shop, where men while away the hours over shisha and Turkish coffee. That means running the door like at a nightclub. The basic policy: Women are welcome; men are subject to screening.

“If we know you, fine. If not, we are screening for how you look, the way you dress, the way you present yourself,” Saadeh said. “We have a lot of female customers, and there are men who want to come in and hit on them or just stare. I don’t want that business. That business ruins my initial business, which is having people be comfortable when they come here.”

On an average day, Saadeh turns away a handful of men. On busy evenings it can be dozens. After years of screening, Saadeh said, he has become pretty good at it. But every once in a while, a troublemaker slips through. He has had to give three men the boot in Nablus: one for being drunk, and two for trying to sit in an area reserved for women.

That’s right. The best seats, on Jasmine’s patio and near the windows, are reserved for women or families and mixed groups. Men who manage to get in without women are usually tucked into a corner, where they can be monitored.

Saadeh said he does not get much pushback about his female-centric approach. Many cafes in Ramallah use similar tactics, as do at least two others in Nablus. And people do not want to be blacklisted from the hottest new place in town. But complaints are sometimes posted on Jasmine’s Facebook page.

“I get people writing things like, ‘I’m more scared of going to Jasmine and getting rejected than of going to the doctor and being told I need surgery,'” he said. “Another person wrote, ‘Going to Jasmine, you might get in, you might not. At least when you go to prison, you know they’ll take you.'” 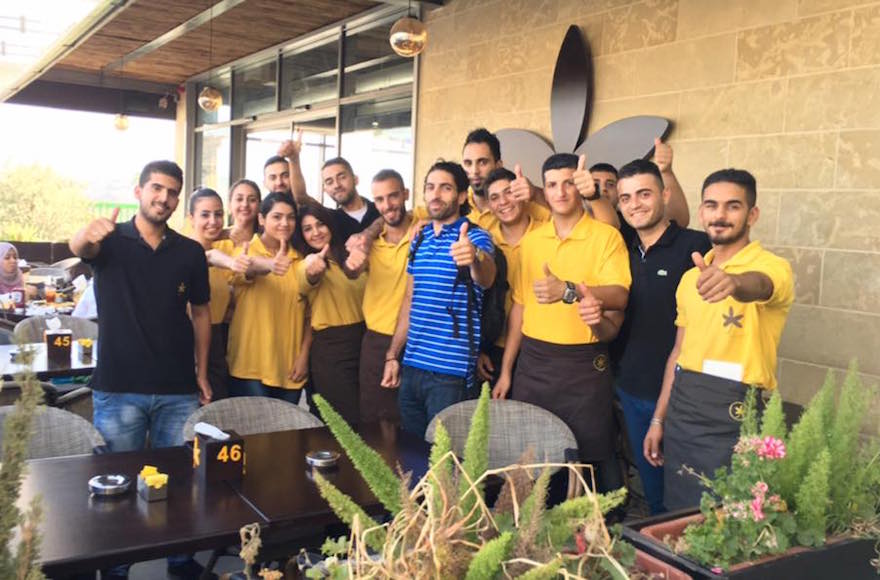 Owner John Saadeh, center, posing with members of his staff outside Jasmine Cafe in Nablus. (Facebook)

Saadeh is also picky about the people he hires. Palestinian restaurants are traditionally staffed by older men. But most of Saadeh’s three-dozen employees are university students. About one-third are women. That ratio has not been easy to achieve, he said, as Palestinian society frowns on women working service jobs, especially when the hours stretch into the evening.

It helps that Jasmine’s reputation preceded it from Ramallah, but concerned fathers and brothers still like to come in to drink coffee and check in. Before one hostess, Nagla Aburous, a 19-year-old art student at An-Najah University, interviewed for the job, her father interviewed the management.

“At first, my father refused. He said you aren’t like the girls who work. I had to challenge him,” Aburous told JTA. “But after he spoke to John, he agreed, and now he’s proud of me. He sees that I come home every night exhausted, but I’m happy. I like it here. I’m having new experiences, and I can be myself.”

Hiring women is just the beginning of a longer process, said Saadeh. He has to educate his employees on how to interact with, let alone work alongside, the opposite sex. Most Palestinian schools are single gender, and social pressure can mean segregation persists even at university. For many young women, working at Jasmine is their first job.

“Some girls are extra sensitive, and some guys are extra aggressive,” Saadeh said. “So you have to bring the males and you have to explain to them: Yes, we all work, we’re all one team. But the girls don’t have the same experience as maybe you do, and that doesn’t mean they’re not good workers. It just means they need a little more time, and we have to be a little more patient. Kid stuff like that.”

Saadeh said the time he invests in the staff helps create Jasmine’s female-friendly atmosphere for the customers. Women see the waitresses and hostesses are comfortable at the cafe, he explained, and the male staff knows how to serve them.

After Jasmine’s grand opening, Saadeh plans to hand off day-to-day management and take a long trip abroad. Then he will begin scouting locations for the next Jasmine. The leading candidates are Israel and a neighboring Arab country. He is leaning toward Israel.