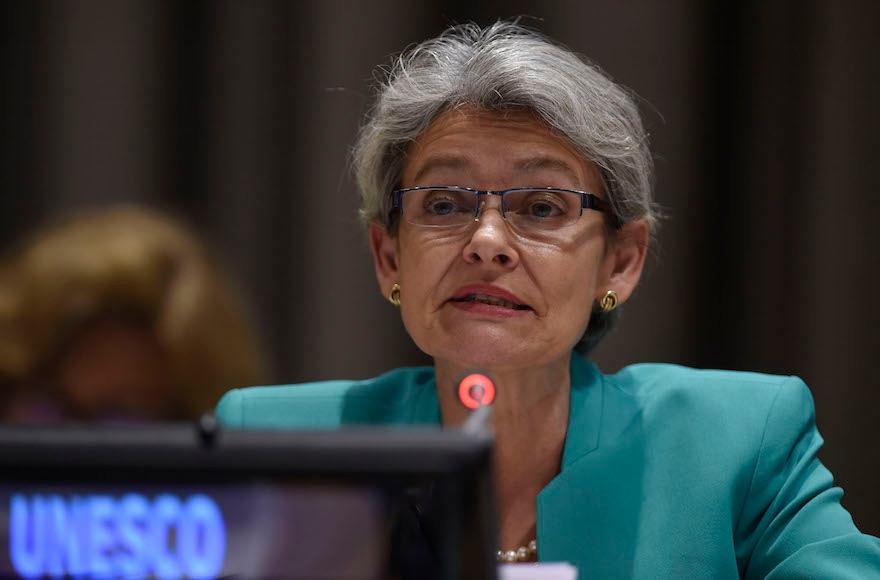 (JTA) — If the latest draft resolution at UNESCO on “Occupied Palestine” succeeded in the Palestinians’ aims to reclaim the world’s attention, then it was a Pyrrhic victory at best and a setback at worst.

Part of an effort on Jerusalem initiated at UNESCO in 2015 by the Palestinian Authority, the Oct. 12 vote saw a comfortable majority of states, including Russia and China, pass language calling on Israel “to cease the persistent excavations and works in East Jerusalem, particularly in and around the Old City,” as one clause reads.

Only six countries, the United States and five European Union members, opposed the resolution and 26 abstained.

Yet the specific charges in the text were largely eclipsed by the resolution’s failure to refer to Judaism’s holiest sites by their Jewish names. The erasure of Jewish ties to Jerusalem ignited a diplomatic dispute that is dividing UNESCO, embarrassing some of its member states and exposing the Palestinians to rebuke not only by Israel, but even by passionate supporters of their cause who are angered by what they perceive as an anti-Jewish bid to rewrite history.

The UNESCO vote is part of a broader push by the Palestinian Authority to inject the Israeli-Palestinian conflict into international forums that are not designed to settle such disputes. And while the strategy is alienating some supporters, observers of Palestinian diplomacy say it is a discredited leadership’s survival tactic, meant to satisfy a disgruntled population and prevent the tragedy in Syria and the rise of ISIS from eclipsing the plight of the Palestinians on the world stage.

Two days after the UNESCO vote, the diplomatic fallout already was generating significant dissent within the ranks of the United Nations cultural agency. Its director-general, Irina Bokova of Bulgaria, penned an unprecedented rebuke of the draft resolution passed by her own organization.

“To deny, conceal or erase any of the Jewish, Christian or Muslim traditions undermines the integrity of the site, and runs counter to the reasons that justified its inscription on the UNESCO World Heritage list,” she wrote.

The resolution refers to Jerusalem’s Temple Mount — site of the first and second Jewish Temples and a locus of Jewish veneration — only by its Arabic name, Al-Ḥaram Al-Sharif. The Western Wall, a remnant of the biblical Temple compound built by the Jewish King Herod and Judaism’s holiest site, is referred to as Al-Buraq Plaza – a term the Simon Wiesenthal Center says was lifted from Hamas literature — with “Western Wall Plaza” appearing only between quotation marks.

When divisions over such things “carry over into UNESCO, an Organization dedicated to dialogue and peace, they prevent us from carrying out our mission,” added Bokova, who according to Israeli diplomats has maintained a largely fair attitude toward the Jewish state. Though UNESCO has passed several texts in recent years seen as erasing Jewish ties to holy sites, it was the first time she spoke out so clearly against the trend.

Outraged, the Palestinian Authority essentially told Bokova to shut up about the draft resolution, which was submitted by seven Arab countries but is widely understood to have been initiated as part of a Palestinian push at UNESCO, which the Palestinians joined as members in 2011.

However, in the days that followed, the Palestinians saw more pushback. Israel ridiculed the text and charged it typified a refusal by the Palestinian leadership to accept the Jewish people’s claim on any part of the Land of Israel.

Both U.S. presidential candidates harshly condemned the resolution, and a U.S. State Department spokesman called it a cause for deep concern and one of several “recurring, politicized resolutions” that he said should not pass. The draft united Jewish groups across the spectrum in outrage; even Americans for Peace Now, which on Oct. 15 condemned Israel’s occupation of Palestinian lands during a U.N. Security Council forum debate, criticized the UNESCO resolution’s “exclusionary and inflammatory language.”

Traditional allies of the Palestinian cause wavered as objections to the text intensified. Mexico, which supported the text, had a change of heart, initially requesting a re-vote and then sufficing with a statement blasting the text as offensive and biased against the Jewish people. This was after it fired its ambassador to UNESCO, Andre Roemer, who is Jewish, for protesting his country’s “yes” vote. In a personal protest, Roemer walked out of last week’s vote in Paris, leaving his deputy to cast the vote for Mexico.

Dozens of Czech lawmakers wrote a joint letter of protest to UNESCO over the vote, as did various U.S. lawmakers and several Christian groups, including the World Council of Independent Christian Churches.

As discord continued to spread, even Brazil, which voted in favor of the text and whose Socialist government is regarded by critics as blatantly hostile toward Israel, expressed dissatisfaction with the text it supported.

Tellingly, France was among 26 countries that abstained from the vote – a virage, or an about-face, from its customary role as “a leading figure in the Arab-led anti-Israel bloc,” according to UN Watch, an NGO that monitors anti-Israel activity at the world body. The French abstention followed an internal dispute that developed between the Foreign Ministry and Prime Minister Manuel Valls over the country’s support in April for a similar UNESCO text. Valls said publicly following the earlier vote that France should never have voted in favor.

India, which supported the UNESCO resolution in April, also abstained, as did Sweden, Spain, Argentina and Slovenia. Both resolutions were opposed by the same six countries: the United States and the five European countries, including Britain, Germany and the Netherlands.

Palestinian leaders are aware of the pushback but are pressing ahead anyway.

They are “desperate to point to achievements to a population that is increasingly critical of Ramallah’s undemocratic rule,” explained Daniel Schwammenthal of the American Jewish Committee’s Transatlantic Institute.

The decision to risk condemnation “could also have something to do with their desire to prevent the de-prioritization of their issue in light of the far greater humanitarian catastrophe in Syria and the rest of the Middle East, which has reduced international attention for the Palestinian-Israeli conflict,” he said.

Officials from both Hamas and Fatah celebrated the UNESCO vote as a major diplomatic achievement and brushed off criticism as owing to “Israel’s influence over the West,” Khaled Abu Toameh, a Palestinian journalist from Jerusalem and critic of Hamas and Fatah, told JTA.

Raphael Ahren, The Times of Israel’s diplomatic correspondent, said that the Palestinians moved ahead with the Oct. 12 vote to flex diplomatic muscle. The fallout, he added, was a genuine rejection of the “outrageousness of the text passed.”

Schwammenthal, though, called the rebuke of the Palestinian gambit an expression of growing resentment internationally of Palestinian attempts after 2011 — the year Palestine was accepted into UNESCO — to “abuse, hijack or disrupt the work of international forums that have nothing to do with their conflict with Israel.”

Schwammenthal pointed to a series of reports, statements and initiatives that reflect an increasingly critical and perhaps impatient attitude in European capitals and institutions toward the Palestinian Authority partly over this perceived abuse. The list includes a 2013 report by the European Court of Auditors accusing P.A. officials of pocketing money from the European Union, its largest donor.

Another blow came in the international Quartet report in July, which for the first time blamed Palestinians for incitement, violence and a failure to get Gaza under control. And another landed this month when the United Kingdom froze millions of dollars in aid payments to the Palestinian Authority amid claims that the money is ending up in the hands of terrorists. Even Norway, a longtime supporter and major funder of the P.A., warned Ramallah for the first time this year not to give aid money to terrorists.

At FIFA, the international soccer federation, the Palestinian delegation’s attempts to have Israel kicked out for political reasons is “creating frustration” and leading critics to point out how Palestinians have named soccer stadiums for terrorists, according to Shimon Samuels, the Simon Wiesenthal Center’s director for international relations.

Ultimately “it wasn’t Israel that got a black eye at the UNESCO vote,” Schwammenthal said, “but the United Nations, whose reputation was once again stained; the countries that supported an outrageous lie, and primarily the Palestinians, who are using up international support to deepen the distrust of the only people who can give them a state, the Israelis.”