In Amsterdam, these Jewish-American comics fight dirty for Hillary 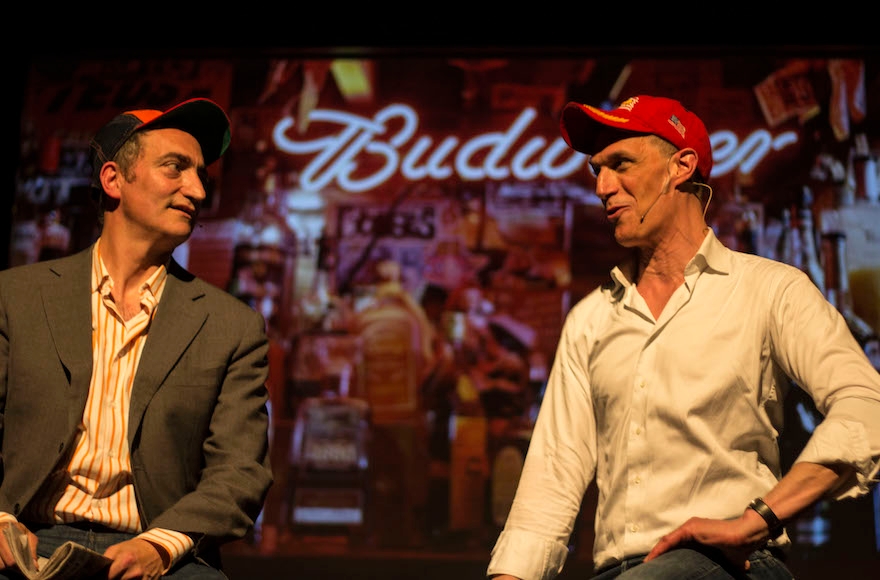 AMSTERDAM (JTA) — In the Dutch capital’s main American comedy club, two middle-aged Jewish men wrestle while wearing blond wigs until one of them pretends to rip out his opponent’s still-beating heart.

This violent portrayal of a Hillary Clinton victory over Donald Trump is the closing scene of a show about the U.S. election delivered by Greg Shapiro and Pep Rosenfeld, high-school buddies from Illinois who two decades ago helped establish Boom Chicago, one of Amsterdam’s most popular comedy venues.

The rest of the English-language show, titled “Angry White Men: Trump up the Volume,” is more cerebral than the wrestling scene. But that bit of slapstick nonetheless captures Shapiro and Rosenfeld’s disregard for taboos and the zeal with which they promote their worldview — two of the characteristics that have earned their club a following among left-wing American expats, locals and tourists here.

“People do want to see not just Donald Trump being beaten on Election Day,” Shapiro, 48, told JTA about the heart-ripping scene in an interview last week. “People want to see Donald Trump eviscerated. They need to see that Donald Trump is not just an evil guy, but he is truly the opposite of what America should stand for.”

Their pedagogic approach, partisanship and violent imagery stand out in the Netherlands, and Western Europe at large, where many local comedians would probably consider such content too risqué because of strict anti-incitement laws and deep social polarization over immigration and terrorism.

But then Shapiro and Rosenfeld, who settled in Amsterdam more than 20 years ago to start a comedy club here, are only part local — and hardwired to speak out against impediments to their understanding of social justice and progress, according to some of their fans.

“They are Americans from a generation that grew up on a very strong civil rights message,” said Jonathan Groubert, an Amsterdam-based Jewish-American journalist who has seen dozens of Boom Chicago shows.

Groubert cited their 2012 show about Dutch racism, in which they blasted a local Christmas tradition that has revelers wear blackface while dressing up as the slave of the Dutch Santa Claus. Slammed as racist by some, the “Black Pete” custom is defended as a non-offensive part of Dutch folklore.

In their 2012 show, which generated considerable media interest in Holland, Shapiro and Rosenfeld encouraged the Black Pete crowd to consider dressing up also as “Hebrew Harry — he’s not Jewish, he’s just a guy who bumped his nose on the chimney on the way down.”

Groubert said the duo put on that show because they were “appalled by the incredibly mixed messaging of liberal Netherlands versus an overt act of bald-faced racism.” 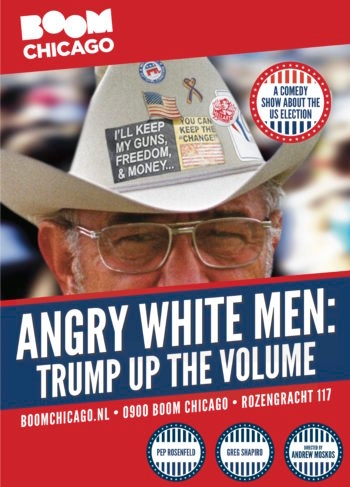 In the show about Trump, in which they refer to him as a “vampire who has the best fangs,” Shapiro and Rosenfeld warn Dutch people not to get lulled by the billionaire candidate’s outrages into any false sense of moral superiority, reminding them that Holland, too, has a blond, popular “racist politician” – a reference to the anti-Islam provocateur Geert Wilders.

Yet the show has exposed Shapiro and Rosenfeld to allegations of hypocrisy.

“They and their supporters champion tolerance and peace but cheer at demonization and depictions of violence of the lowliest kind,” said Renee Nielsen, chairwoman of the Netherlands’ Republicans Abroad chapter. “It speaks volumes as to their double standard.”

The allegation does little to shake the comic pair.

“There’s a double standard, sure,” said Shapiro, a tall and gangly man who nonetheless does a credible imitation of the bearish Republican presidential nominee.

Rosenfeld adds: “Comedians live by double standards. But it’s kind of worse when a presidential candidate lives by one, too.”

The fight scene is essential to the show, Shapiro said, because it is “the payoff” to the act’s main question, namely: “Is it possible to get excited or passionate about Hillary?”

Rosenfeld said it was important for the duo that audiences “see Clinton beat Trump, as opposed to President Barack Obama or Bernie Sanders,” the Jewish Independent senator who put up a surprisingly strong fight against her in the Democratic primaries.

The comics, whose club last month hosted a fundraiser for Clinton, are unabashed in their “strong pro-Hillary message,” as Shapiro termed it. They call on American audience members to ignore her perceived flaws.

“Hold your nose” and vote for her anyway to keep “racist Trump” from winning, they urge the crowd.

During a recent “Angry White Men” performance, the crowd showed no sign of disagreeing with their sentiment or any other element of the show, which featured a joke that suggests U.S. police officers enjoy killing blacks. Seated around dinner tables and stage-side couches in Boom Chicago’s sold-out hall near the Anne Frank House, the audience of 300 reacted enthusiastically even to unlikely comedy props such as a chart showing the division of wealth in the United States (“It’s way worse than you think,” Rosenfeld told them didactically).

It took about a decade for Boom Chicago, where Rosenfeld and Shapiro are just two of some dozen house comics, to develop its current fan base. A spinoff of Chicago’s influential improv comedy scene, Boom alumni include Seth Meyers and Jason Sudeikis of “Saturday Night Live,” Ike Barinholtz of “The Mindy Project” and Colton Dunn of the current NBC sitcom “Superstore.”

The municipality, which now advertises the club as one of its tourist attractions, declined the founders’ subsidy application, warning them that their plan of setting up an American comedy club in Amsterdam was essentially a pipe dream.

The founders had the rejection letter framed and hung in each of the three venues they moved to as they expanded to accommodate the growing stream of spectators – a mix of Dutch locals, American expats and English-speaking tourists. Part of Boom Chicago’s strategy has been to stay current – including by putting up a show ahead of every U.S. presidential election since 2004.

The cosmopolitan bunch of “Amsterdam lefties,” as Shapiro terms them, need little encouragement to cheer for the demonization of Trump or, in the past, ridicule of George W. Bush. A far more challenging goal was to deliver a sobering message on favorites like Barack Obama and Bernie Sanders, Shapiro recalled.

“The audience went in saying we love Obama,” Shapiro said, adding that it was the duo’s job “to point out he’s not perfect.” In 2012, Rosenfeld and Shapiro produced a video of a dull Obama speech, accusing him in subtitles of mediocrity, cluelessness, populism and disingenuous.

“If you side with the loony left against Hillary, you’re voting Trump,” he declares.

Though they note their Jewish origins, the duo don’t define themselves as Jews.

“I don’t want to be a self-hater but I’m American, I’m not so religious,” Rosenfeld said.

“And my religion,” Shapiro adds, “is a liberal interpretation of the U.S. Constitution.”