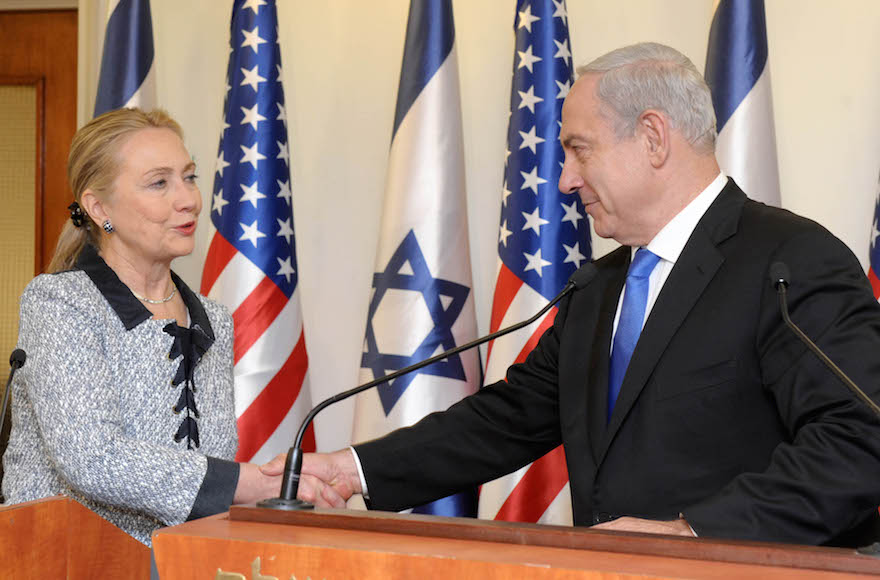 WASHINGTON (JTA) — Hillary Clinton’s plan to meet the Israeli prime minister in her first month as president is listed high in an internal campaign memo outlining the priorities of her first 100 days — a sign of how important it is to repair U.S.-Israel tensions.

The campaign’s determination to distance itself from President Barack Obama’s difficult relationship with Benjamin Netanyahu is seeded throughout emails stolen from her campaign chairman John Podesta’s private account and dumped in recent weeks by WikiLeaks. (Podesta is one of the officials CC’d on the first 100 days memo.)

The leaked emails offer a glimpse of the sausage-making of a presidential candidate’s policies when it comes to Israel, the Iran deal and the boycott Israel movement — sometimes spicy, sometimes bland and sometimes hard to swallow.

Tony Carrk, the research director for Clinton’s campaign, on Jan. 27 distributed to top campaign officials a compilation titled “top priorities/first 100 days answers.” It’s not clear how the memo was to be used, but one possibility is as a quick-answer reference for donors, surrogates or reporters.

The Democratic nominee’s pledge to invite the Israeli leader to visit in her first month is the top entry in the memo’s foreign policy section.

Another needle threaded in the emails is how to simultaneously express support for and skepticism of the Iran nuclear deal, an agreement that Obama has said is one of his major achievements and which drove the deepest wedge between the president and Netanyahu.

Carrk’s internal memo quoted Clinton at her appearance the previous month at the Saban Forum, where she was interviewed by Haim Saban, the Israeli-American entertainment mogul who funds the forum sponsored by the Brookings Institution along with being a major backer of Clinton.

Saban asked Clinton what she would do on her first day in office, and her reply conveys her awareness that U.S.-Israel ties could stand improvement, particularly in the military relationship, while not explicitly acknowledging tensions.

“One of the things that I have said is that on the first day I would extend an invitation to the Israeli prime minister to come to the United States,” she said. “Hopefully within the first month, certainly as soon as it could be arranged, to do exactly what I briefly outlined to work toward very much strengthening and intensifying our relationship on military matters, on terrorism, and on everything else that we can do more to cooperate on that will send a strong message to our own peoples as well as the rest of the world.”

Clinton said the invitation was “near the top” of her list.

The Netanyahu-Obama tensions are more explicitly mentioned in a May 2015 exchange between Podesta and his daughter, Megan Rouse, who is involved in Democratic politics in California.

“I’ve heard a concern from some folks who care deeply about Israel that Hillary will be the president ‘most unfriendly to Israel in our history, worse than Obama,’” Rouse wrote to her father. “Thoughts on how I might respond in conversation?”

“That’s a bit crazy,” Podesta replied. “Obama developed a real feud with Bibi [Netanyahu], but she has been a staunch defender of Israel since her Senate days. Probably her very best supporters are Haim Saban, and Danny Abraham [the Democratic donor and diet plan magnate], who would not be with her if she wasn’t totally committed to Israeli security.” 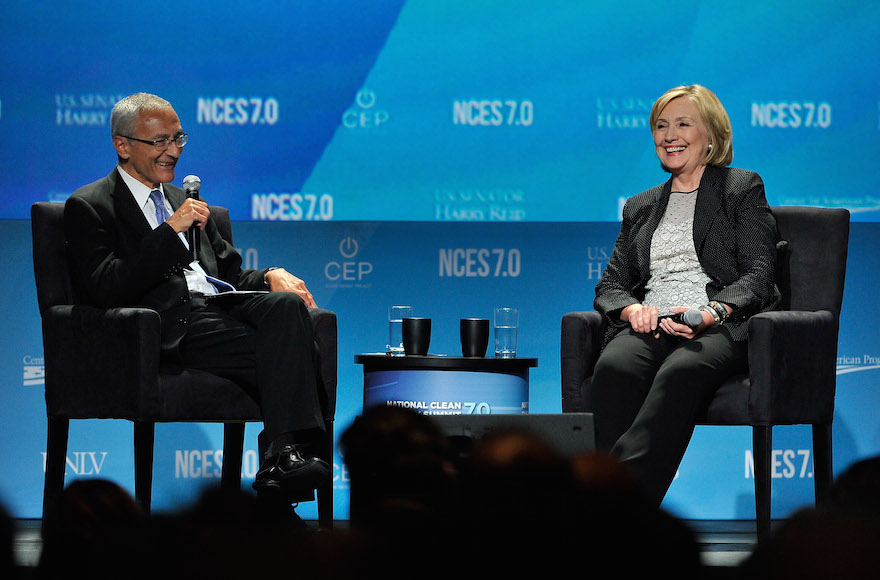 Saban in a June 2015 email told Podesta and Huma Abedin, a top aide to Clinton: “She needs to differentiate herself from Obama on Israel. It can easily be done w/o criticizing the President.”

Later he added to the same email string a quote that week from Sen. Marco Rubio, D-Fla., then considered a serious contender for the Republican nomination.

“If I am president, this country will do whatever it takes to help the people of Israel survive and prosper as a Jewish state,” Rubio was quoted as saying. Saban added: “Let’s not allow them to steal the Jewish vote from us.”

In March 2015, Saban forwarded articles to Abedin quoting Malcolm Hoenlein, who directs the Conference of Presidents of Major American Jewish Organizations, after Hoenlein had spoken with Clinton.

“Clinton thinks we need to all work together to return the special U.S.-Israel relationship to constructive footing, to get back to basic shared concerns and interests, including a two-state solution pursued through direct negotiations between Israelis and Palestinians,” Hoenlein said.

“Hey Huma. A very good statement … w/o saying anything that would show even a sign of criticism of the administration,” Saban commented. “Very smart and politically correct.”

Saban in March flagged an ad placed in national papers by the World Values Network, a platform for the activist rabbi and former Republican congressional candidate Shmuley Boteach. The ad sought to cast longtime Clinton friend Sid Blumenthal and his son, Max, as Clinton’s “anti-Israel advisors.” The older Blumenthal has been critical of Israel, but is not hostile to it. Max Blumenthal is an anti-Zionist.

“Some unflattering points, that we better be aware of, just in case Trump (or whoever) gets a hold of this and uses it in states like Florida where it would be very damaging,” Saban said in an email to top campaign officials. Donald Trump at the time was leading in the Republican nomination battle and is now the nominee.

Robby Mook, Clinton’s campaign manager, agreed with Saban and asked if Sheldon Adelson, the casino magnate and major funder of Republicans, funded the ad campaign. (In fact, he did, although Saban, who is friends with Adelson, replied that Adelson was not involved.)

Also telling was Podesta’s reaction to the Boteach ad, in which he recalled the controversy stirred by Blumenthal’s advice to Clinton on Libya during congressional hearings on the deadly 2012 attack on the U.S. consulate in Benghazi.

“Sid is the gift that keeps on giving,” Podesta said. “I thought his troublemaking on Libya was plenty enough.”

A cool embrace of the Iran deal

The Clinton campaign is sensitive about the Iran nuclear deal, which exchanged sanctions relief for a rollback in Iran’s nuclear activities. Netanyahu vigorously opposed the deal, and the low point in his relationship with Obama was his speech to Congress in March 2015 urging lawmakers to kill the deal. (Obama won that fight, and the deal is in place.)

Iran appears on the 100 days list, but only in answer to a question from a Omaha World Herald reporter in October 2015 who asked Clinton about pledges by Republican candidates to shred the deal on their first day in office.

“No,” said Clinton when asked if she would shred the deal. “Because, well, I negotiated the coalition that put the sanctions on Iran that brought them to the table, and I support the deal. And I’ve spoken at length about what needs to be done to make sure Iran is held accountable.”

That has become her default posture on the deal: Playing up her bad cop role in building sanctions against Iran, and swearing to uphold the agreement while emphasizing her distrust of Iran.

In April 2015, Saban was embarrassed when an American newspaper reported that he told an Israeli television station that he was certain Clinton opposed the Iran deal.

“Someone took my statement and translated it freely to English and stated what THEY wanted to state, NOT what I said,” Saban told Podesta. “Never said that she opposes the deal … said ‘I don’t know and if I knew I couldn’t say.’” Podesta told Saban not to worry.

A Politico story in July 2015 suggesting that Clinton was conveying double messages on the Iran deal, with both supporters and opponents of the deal coming away from meetings with the candidate feeling she agreed with them, stirred consternation and led to a discussion among campaign officials about how best to make a clear statement on her support for Israel.

That discussion produced a letter from Clinton to Saban forcefully repudiating the Boycott, Divestment and Sanctions movement targeting Israel. The strategy decided on by the campaign officials was to “give [the letter] to Jewish media.”

A PR firm working for Saban forwarded the letter to JTA.

Israel as a talking point

The campaign was wary of making Israel an issue with the broader electorate. An exchange in May 2015, first reported by Haaretz, showed Jake Sullivan, Clinton’s top foreign policy adviser, recommending that she include Israel in stump speeches. Mook joined others in arguing against it, saying that talk should best be left to Jewish donors.

The wariness appears to stem from Israel’s increasing association among voters with the American right wing — or, as the right might put it, a distancing from Israel by the left. In the same exchange, pollster Joel Benenson suggests that to mention Israel – and even foreign policy – is to play into Republicans’ hands.

Stuart Eizenstat, a top liaison between the campaign and the Jewish community, advised Sullivan, ahead of the Clinton letter denouncing BDS, not to alienate the party’s liberals.

Writing to Sullivan, Eizenstat said the BDS movement’s success in gaining adherents among liberals “comes not from anti-Israel or anti-Semitic views, but because of sincere concerns with Israeli settlement policy.”

He added: “I think it is important for Hillary not to alienate or criticize liberal Democrats and liberal Jews, but to make the point that joining the BDS campaign is NOT the appropriate way to respond to concerns about Israeli settlement policy.”

Eizenstat also delivered advice on Saban’s involvement, which the campaign ultimately ignored. He noted Saban’s partnership with Adelson (since dissolved) in a bid to fight BDS on campus.

“Although I know Hillary is close to Haim Saban, his partnership with Sheldon Adelson, who has a Likud agenda, may not be the best offensive against BDS,” he said, referring to the right-wing Israeli party headed by Netanyahu.