In Miami Beach, Donald Trump’s Orthodox support is increasingly on the down-low The high-schoolers in Torah Treasures Judaica store are preparing lulavs for sale before Sukkot, which is to start in a couple of days, and shoppers are rushing into Kosher Price Market for last minute pre-Shabbat shopping. The local Chabad guy is working Pita Hut seeking folks who want to lay tefillin.

And no one wants to talk, especially to a reporter about the presidential election.

Kippah-clad shoppers scoot away from me when I approach them. Some pretend not to speak English.

Chabad guy won’t speak, but asks if I want to lay tefillin.

“Friends?” he asks, although he won’t tell me his name.

It’s a week after the video dropped onto an unsuspecting world, the 2005 outtake from “Access Hollywood” where the presidential candidate who polls say is favored by most Orthodox Jews bragged about sexually assaulting women.

Does this explain the silence?

I’m about to give up — how often can I chase someone who looks obviously Orthodox before someone calls the cops? — when, lo and behold, someone wants to talk.

He even approaches me: He recognizes me from my social media feeds, although we’ve never met.

“Kampeas!” he says. “What kind of bullshit article did you write today?”

He holds up his smartphone as his family toddles off into the distance.

“’Donald Trump’s “international bankers” speech leaves some uneasy’? Oof.” He’s not happy what I wrote about the speech, which the Republican nominee gave the day before in nearby West Palm Beach, alleging secret international financier conspiracies. I wasn’t the only observer to note the speech’s anti-Semitic associations.

“He’s not an anti-Semite,” he scolds me.

He won’t let me use his name – once he introduces himself, I realize I know him, by reputation — but he wants to give me the lowdown, “off the record,” of why no one will talk with me. I lower my notebook and he looks at me like I’m nuts.

“Write, write!” he says. He doesn’t mean off the record, he means “on background.”

“Call me an Orthodox active in Republican politics.” Done.

“No one’s going to talk to you,” he explains. “You can’t be for Hillary in this community. But how can you be for Trump? What he said was disgusting.”

Trump has said he was engaging in “locker room talk” on the 2005 video and has denied the ensuing allegations by women (up to 10 at the end of this week) that he sexually assaulted them over the years.

He asks me if I saw the CNN interview, the evening previous, with Jessica Leeds, who said Trump assaulted her on an airplane decades ago.

“What do you think? Credible? Credible!” he answers before I have a chance to reply. “We have a word in Jewish,” he said, meaning Yiddish. “Ekldik,” disgusting.

Why can’t you be for Hillary in this community? I ask.

Democrats are hard work, he explains, and Clinton won’t be different from Obama: They come around to the right position on Israel, but it takes exhausting work behind the scenes.

“Four more years of that,” he says, not relishing the prospect.

A September poll by the American Jewish Committee showed Orthodox voters were a mirror image of the broader community when it came to presidential preferences. The poll showed Clinton defeating Trump, 61 percent to 19 percent among Jewish voters; among Orthodox Jews, Trump was favored at 50 percent and Clinton at 21 percent.

But that was before the sex scandals, and there are indications they might be having an effect. Clinton’s campaign this week dispatched Joe Lieberman, the 2000 Democratic vice presidential nominee and an Orthodox Jew, to South Florida, where he wooed fellow Orthodox Jews, among others.

Lieberman told me that he sensed the community there – including the Orthodox Jews he met – were moving Clinton’s way.

And this week, in Beachwood, a Cleveland suburb with a substantial Orthodox population, there was an event titled “Ohio Orthodox Jews on the Fence.”

“Are you an Orthodox Jew still on the fence, asking yourself what is really best for the Jews, and best for Israel, in this election?” asked the Facebook pitch for the event featuring Boston University scholar Hillel Levine. 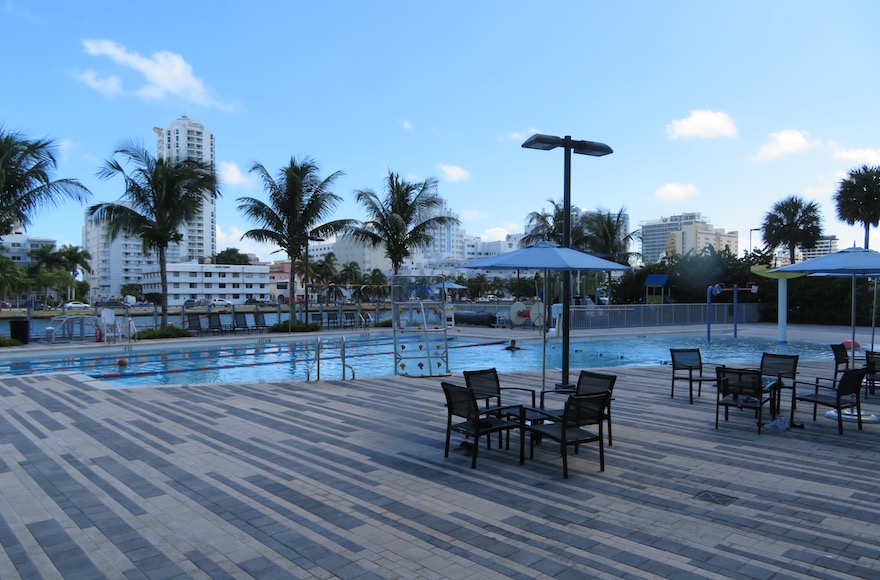 At the Miami Beach Jewish Community Center a short walk away from 41st Street, I position myself at the entrance waiting for families to drop off kids for dance and gymnastics. The kids are accompanied by nannies. An attractive young couple coming out of the exercise room apologizes for not being Jewish.

“Great,” I say, struggling for an impression of a city they clearly adore. “I got upgraded to a Mustang convertible at the airport!”

“Niiice!” I have achieved some kind of Miaminess.

The secular woman, Mia Glick, a pilates teacher, is happy to talk. Of course she’s voting for Clinton. Trump has no character, she says, and the video is proof positive.

Glick was a Ford agency model on a gig at the Plaza Hotel in Manhattan. Trump marched up to her, she presumes ready to launch a come-on, when she grimaced at him and Trump did an about-face.

She replicates the grimace for us and Trump’s about-face. The Orthodox woman, Teresa, widens her eyes.

What about you? I ask Teresa, a 33-year-old stay-at-home mom. She who won’t give me her last name.

What’s appealing about him?

“My husband is voting for him.”

“He has some good points,” she says, pausing to think. “The wall – he wants to build a wall. He’s copying Israel.”

Back on 41st, I check in at Roaster’s NY Deli. Brice Ciener, the manager, is deep in conversation with the owner, David Glass. They wave me over.

Ciener, who does not back Trump, enjoys chatting politics with the Orthodox clientele, who do.

Just a few minutes ago, he says, “You missed a couple.” Older, they backed Trump, principally because they do not trust Clinton on Israel. Now, though, there was a change.

“The wife can’t vote for him. She doesn’t know who to vote for,” Ciener says. “The guy laughed it off.”

I head out. Across the street, Chabad guy waves, heading out of Pita Hut for Chicken Kitchen.

I get into the white Mustang convertible, turn up Collins Boulevard and blast Latin music into the clear late afternoon air, something I’ve been planning since I was about 8 years old. After that indulgence I head onto residential streets, searching for signs: Trump-Pence. Clinton-Kaine.