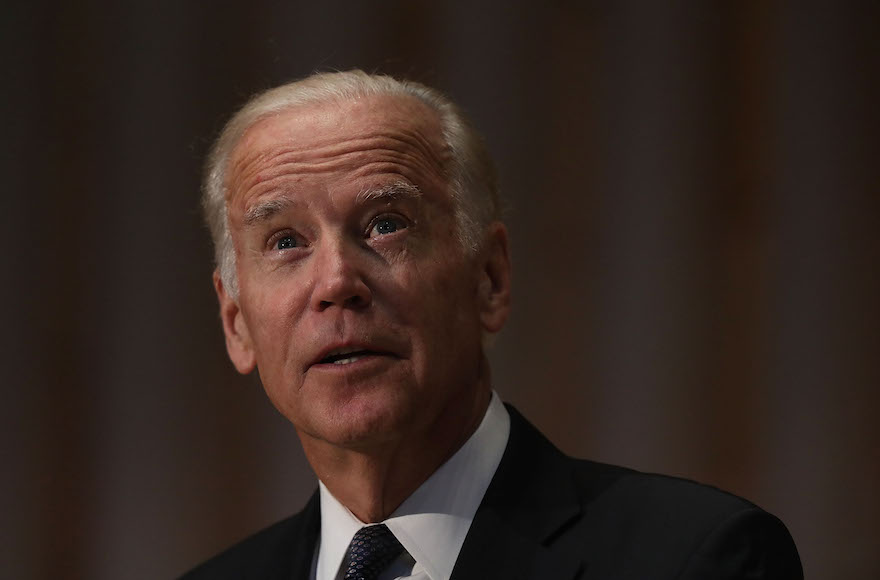 The famously Catholic vice president allowed this revelation on Monday in Dayton, Ohio, where he was campaigning for the Democratic presidential nominee and former Ohio Gov. Ted Strickland, the Democrat attempting to unseat Republican Sen. Rob Portman.

The moment comes 19 minutes into the speech, courtesy of C-Span, and counterintuitively enough, after Biden crosses himself to emphasize that he does not like saying the words “Donald Trump.”

The crowd laughs appreciatively, and Biden tosses out a self-deprecating line he often uses when he gets a little irreverent: “No one ever doubts I mean what I say, the problem is, I sometimes say all that I mean and it gets me in trouble.”

Someone in the crowd interjects, “You’re a real mensch!”

“By the way, I’m the only Irish Catholic you know who had his dream met because his daughter married a Jewish surgeon, I just want you to know that,” he says, to applause and laughter.

Marc Daniels, who has been ubiquitous this year on the campaign trail selling specialized kippahs, tells me he was in the second row with a stack of Hillary kippahs. Biden seemed to notice.

“I have more yarmulkes — as many yarmulkes as you do,” Biden says, and suggests he’s contemplated conversion. “If I’m going to switch, I know where I’m going.” Then he tries out another line he’s tested on the Jewish circuit. “I just want you to know, the oldest Catholic church in Delaware, my daughter got married several years ago and there was a huppah on the altar.”

He may be right on the length of his Jewish involvement, although we’ll leave how “Jewish” one is up to a higher power. One marker: Biden was in Israel in 1973; Clinton’s first visit was in 1981.

He’s also got twice the machatainisters, meaning, Biden has two Jewish in-laws, as opposed to Clinton’s one. In addition to Ashley’s marriage to Krein, Biden’s late son, Beau, married Hallie Olivere, who is Jewish, in 2002. Clinton’s daughter, Chelsea, is married to Marc Mezvinsky.