Cubs fans, like the Jews, now face the challenge of success 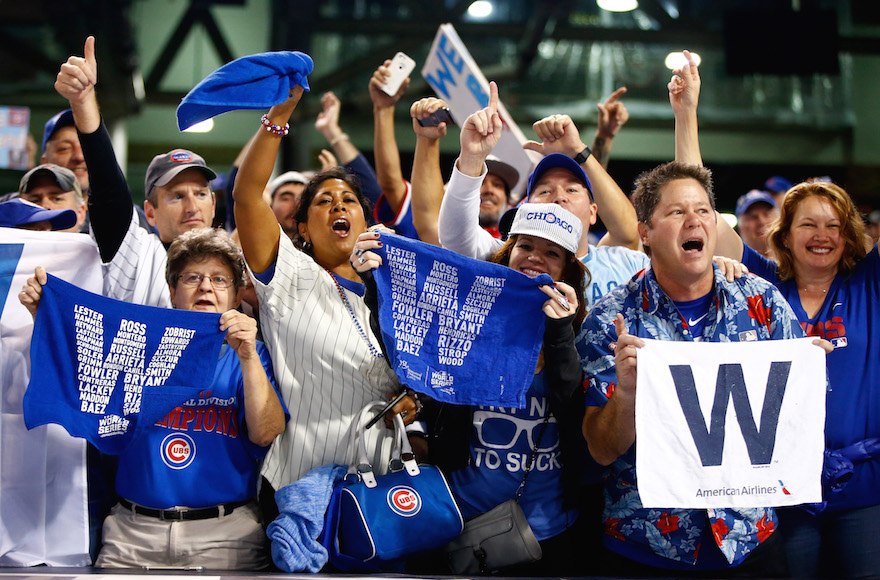 For years, I’ve told anyone who would listen that the Cubs were the team of the Jews. I’ve written two blog posts about it during the past month alone.

Long suffering. Faithful. Bound to tradition. Hoping for redemption, to no avail. It was all there.

Until now. For the first time since my great-grandfather’s bar mitzvah, the Cubs are World Series champions.

So as I was leaping around my living room at 12:30 this morning shrieking in joy, an uncomfortable thought passed through my head: From now on, what will it mean to be a Cubs fan?

Our identity had forever been tied to futility. While the Yankees are known as the Bronx Bombers, the Cubs had been called the Lovable Losers, famous for selling out Wrigley Field even when they lost 100 games a season. The milestones we remembered were not our distant world championships but our years of epic collapse: 1969. 1984. 2003. 2008. Otherwise rational people — including me — believed in a curse tied to a goat going back at least to 1945.

So how do the Cubs now deal with success? Maybe they can ask the Jews.

Yes, the Jewish people still face myriad threats, as any Jewish nonprofit executive will eagerly tell you. Anti-Semitism is rising, or at least more visible, in America and Europe. Israel faces recurring waves of terror and has few allies. And there is no shortage of infighting among Jews.

But compared, say, to 1908, the Jews are doing pretty well. Despite its problems, Israel is a regional power with a growing economy. There is barely a Jewish community in the world awaiting rescue. In America, though anti-Semitism may be inching up, overall it’s still at historic lows. If Merrick Garland is ever confirmed for the Supreme Court, four of its nine justices will be Jewish. And in Europe, most governments now denounce anti-Semitism rather than perpetrate it.

Remarkably, most conversations about “Jewish continuity” deal not with physical threats but with the challenges posed by radical acceptance into the mainstream.

This newfound success hasn’t prevented any number of Jewish leaders from “shreying gevalt,” or raising alarm, over crises both foreign and domestic. Millions of dollars are raised to combat everything from delegitimization of Israel on campus to promoting Jewish inmarriage.

Still, some Jews have embraced the success of their people. Groups like Avodah and the American Jewish World Service have tried to leverage Jewish affluence to help non-Jews in need. Hillel International, a legacy organization, has taken a proactive stance against sexual assault — hardly a problem limited to Jews. Even the Jewish federations, the umbrella charities for Jewish giving, have debated how much to spend on specific Jewish issues and “tikkun olam” — a shorthand for universalist causes — and regularly send emergency funds to global disaster victims. Israel sends medical teams to crisis sites worldwide.

Jews in America still remember their tragedies — from the destruction of the Second Temple to the Holocaust — but the days committed to their memory are increasingly ritualized because the catastrophic effects feel distant in this age of Jewish safety.

Nearly 20 years ago Alan Dershowitz asked the question: “Can Jews survive their success?” The challenge, he wrote, is “to move the Jewish state of mind beyond its past obsession with victimization, pain, and problems” and emerge with “a Judaism that is less dependent on our enemies for its continuity, and that rests more securely on the considerable, but largely untapped, strengths of our own heritage.”

Not to equate the two, but perhaps Cubs fans, too, will have to adjust to a new identity and a new story that we tell ourselves. My dad will always remember 1969, and I’ll always get a stomachache when I think of 2003, but they will remain only as memories, not as portents of failures to come. Being a Cubs fan, like being a Jew, will mean accepting our blessings along with our curses.

Plus, the Cubs still are the team of the Jews. It appears their messiah has come, and his name is Theo Epstein.