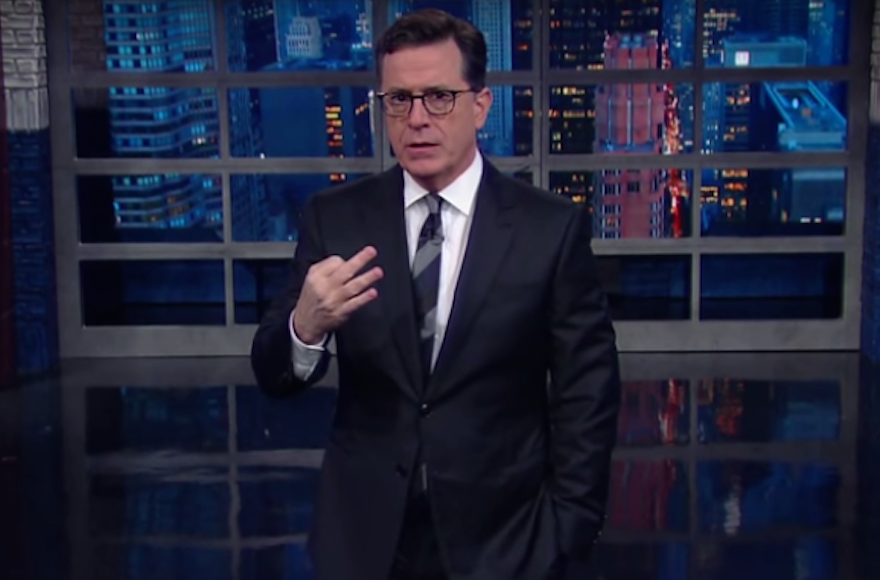 Stephen Colbert on the set of his late-night CBS show, Nov. 3, 2016. (Screenshot from YouTube)
Advertisement

“It is absolutely horrifying to hear that kind of anti-Semitic language,” he said in his monologue on “The Late Show” on Nov. 2, which was uploaded to YouTube on Wednesday. “Usually you just read it in Yahoo! comments.”

Colbert played a clip of Lindell’s chanting, prefacing it by saying, “If your children are in the room, you might want to regret having brought them into this world.”

Lindell later explained that it was all a misunderstanding — he was simply pronouncing the “U” in “U-S-A” with a Latino accent, in order to show solidarity with Mexicans. He told the Arizona Republic newspaper that he started the chant because he was standing near a group of Hispanics who had started the chanting but stopped, apparently because they didn’t fit in because of their accents.

He said he also likes the way “Jew-S-A” sounds, saying it has more “flair.”

“The poor man was just trying to make the Mexicans feel welcome, so they would have fond memories of America after Donald Trump loaded them onto catapults,” he quipped.

“I’m going to call this the worst excuse of all time. It’s the worst possible. I think it’s even worse than the close second. This is the second worst of all-time: ‘We weren’t burning that cross on your lawn to scare you, we just wanted you to see our really cool ghost costumes.'”