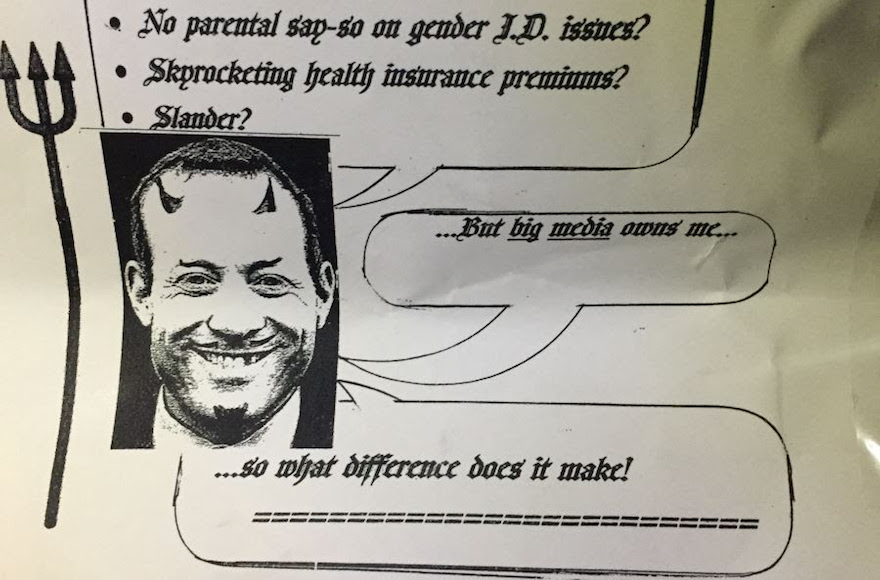 WASHINGTON (JTA) — Candidates for Congress in a northern New Jersey district traded charges over an anti-Semitic flier, with one side wondering if it was a political ploy.

The flier, distributed last week at schools and train stations in the 5th Congressional District, depicts the Democratic challenger, Josh Gottheimer, who is Jewish, with devil’s horns and a sinister goatee alongside a pitchfork. Gottheimer alleges that supporters of the Republican incumbent, Rep. Scott Garrett, distributed the flier.

Unsigned and using Gothic script, it says Gottheimer is the choice if voters want “11th hour partial birth abortions,” “open borders for fentanyl and heroin,” and “slander.” A speech balloon emanating from the Gottheimer caricature says, “Big media owns me.”

In a release, Gottheimer called on Garrett to “denounce” the flier and sought to tie the incumbent’s sharply conservative positions to its sentiments. He noted Garrett’s opposition to LGBT rights expansions and vote against removing Confederate flags from veterans’ cemeteries.

“Garrett has also yet to apologize for attending a fundraiser for the Oath Keepers, an extremist militia organization deemed domestic terrorists by the New Jersey Department of Homeland Security,” the Gottheimer statement said.

Garrett’s campaign did not deny the congressman attended the event last month, but has denied any connection to Oath Keepers.

In response, Garrett’s campaign condemned the flier, but also suggested that Gottheimer was behind it.

“My family fled Nazi-occupied Europe to escape persecution because of their Jewish heritage,” Sarah Neibart, the Garrett campaign manager, said in a statement. “I find this flyer to be disgusting, and I would never authorize such a deplorable document to be produced by our campaign or any affiliated group. I would also call on the media to get an honest answer from the Gottheimer campaign as to whether this is a political ploy manufactured by them to fabricate a hate crime.”

“He is one of the strongest supporters of the State of Israel we have in Congress and has been a loyal friend of the Jewish people,” Schwartz said of Garrett. “I am appalled by the tenor of the campaign being run by his opponent, and I know Scott Garrett had absolutely nothing to do with this disgusting flyer.”

Separately, J Street, the liberal Jewish Middle East lobby group, has emerged as an issue in a congressional race in New Hampshire.

Shawn O’Connor, a former Democrat running as an Independent in a bid to unseat incumbent Republican Frank Guinta, has made a central plank of his campaigning his refusal to accept funds from political action committees. In a web ad, he refers to J Street, which has funneled $250,000 to Democrat Carol Shea-Porter’s campaign, “a lobbying organization that supports Iran.”

J Street backed last year’s nuclear deal with Iran trading sanctions relief for a nuclear rollback because it argued the deal would make the region, and Israel, safer. Centrist pro-Israel groups opposed the deal, saying it would eventually clear the way to a nuclear Iran.

J Street on its blog reported that O’Connor raised the issue in a debate last week, and Shea-Porter rejoined, calling J Street “pro-Israel and pro-peace.”

“This is a terrible thing to say about people who support Israel and also support peace,” Shea-Porter said after O’Connor said he wondered what Iran got for the money.

Meanwhile, J Street has claimed that in the summer of 2015, when O’Connor was contemplating a run as a Democrat, he sought the group’s endorsement. O’Connor, replying to a JTA query on Facebook, said he met with J Street at that time at the behest of a potential backer, “even though I was suspect of their agenda,” but ultimately decided not to seek its endorsement.