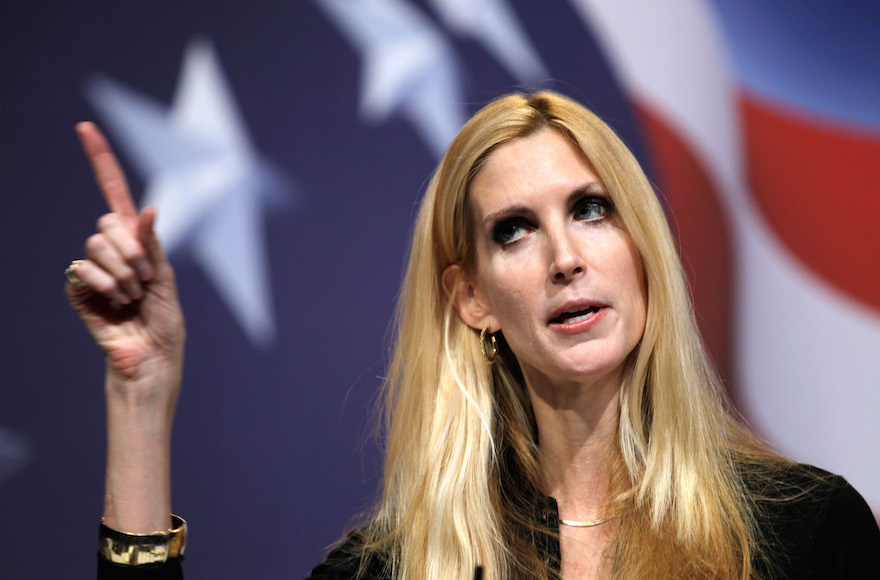 Ann Coulter isn’t too happy that Americans with immigrant grandparents are voting in this election.

The right-wing commentator and Trump zealot invoked the internet’s ire with a bizarre tweet on Tuesday.

If only people with at least 4 grandparents born in America were voting, Trump would win in a 50-state landslide.

Perhaps Coulter was merely pointing out how recent immigration has shaped the electorate. But given her track record of defending America’s “Anglo-Saxon character” and lamenting how much “browner” it has become, other are seeing more ominous intentions.

The Huffington Post notes that Coulter’s “four grandparents” rule sounds a lot like the Nazi Nuremberg laws — which defined someone as Jewish who had at least three  Jewish grandparents. In Nazi-occupied Germany, Jews were eventually stripped of the right to vote.

Hey. The Nazi's did this. Literally. It was called the #NurembergRaceLaws. You're a monster @AnnCoulter. https://t.co/1DOAOHNDSm

As others have pointed out, Trump himself wouldn’t even be able to vote in Coulter’s alternative universe — since his mother and grandparents were immigrants.

Just one problem with that… Trump himself wouldn't be able to vote, much less run for president.#Drumpf https://t.co/GQu8cF85ps

But then Trump couldn't run, since his mom and paternal grandparents weren't born in the US. So, um, yeah. https://t.co/7Uxwnuqk0Q

Trump’s wife Melania, who was born in what is now Slovenia, wouldn’t be able to vote; nor would Trump’s daughter Ivanka, whose mother Ivana is from the former Czechoslovakia.

Trump based much of his campaign on opposing illegal immigration and warning about immigrants from Muslim countries. He launched his campaign by saying Mexican immigrants are “bringing crime. They’re rapists.”

The progressive Jewish nonprofit Bend the Arc released a video in September featuring elderly Jews begging their grandchildren not to vote for Trump.

“We have seen this before. We saw it in Germany, and don’t want to see it again,” an elderly woman says in the video.